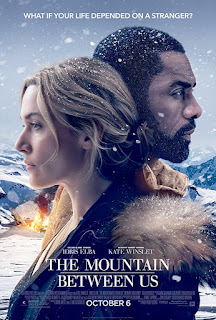 The Mountain Between Us seemed like a good idea on paper. It has notable Palestinian director Hany Abu-Assad (known for his 2005 Oscar-nominated film Paradise Now) and veteran cinematographer Mandy Walker behind the camera, and big name actors Idris Elba and Kate Winslet in front of it. It’s based on Charles Martin’s 2011 romance-disaster novel of the same name (that’s right, I said “romance-disaster”). It’s a story about the bonds built between people enduring a harrowing, life-threatening situation for an extended period of time - which could have been interesting if it didn’t feel like it were being strung together by a series of cliches.

We're introduced to Ben (Idris Elba) and Alex (Kate Winslet), the only two people who missed the memo about their flight being cancelled. They're also the only two people in such a hurry to make their destination that they feel the need to complain to airport staff until they notice each other having similar difficulties. That doesn’t seem to be a problem though, because Alex has some ill-defined connection that offers her a ride on a small independent aircraft with perhaps the most stereotypical old-timer pilot you can imagine.


The film wastes no time getting the two main characters stranded in the snowy mountains so we can witness them relying on each other to survive. Though it’s worth mentioning that the airplane crash sequence is one of the worst, staged, shot, acted, and “special effects-ed” sequences I’ve seen in a big budget hollywood film in years.

The professions of these two random acquaintances seem ideally suited to serve the needs of the film. Ben is a doctor who needs to perform surgery on a child the next day, explaining his need to catch a flight, but his knowledge comes in handy given the dire situation he and Alex find themselves in. Alex, on the other hand, is a photojournalist whose natural inquisitive nature proves useful in getting all the expository information out of the way in the early going. She’s in a rush to get home where she’s due to get married, yet there’s an obvious attraction and romantic tension between Ben and Alex as early as the first few shots of them on screen together. As such, the film begins as a disaster/survival story, but develops into a melodramatic romance before remembering that these two lovebirds need to find a way to safety at some point.


To its credit, like any decent disaster/survival story, The Mountain Between Us spends the bulk of its time with the characters developing a relationship, trust, and eventually reliance on one another while slowly delving into their personal lives. As such, it offers some occasionally entertaining banter between Elba and Winslet, but more often it favors more realistic conversations, conversations that tend to turn into arguments about what they should do next or whose fault it is, or who had the better reason to get back home. While we’d like to think we’d stay cool under pressure and make it out of a dire situation, and maybe that situation would make us closer to those we go through it with, but realistically there’d be fights and arguments and perhaps a deeper friendship.


While cinematographer Mandy Walker has quite the filmography, here she, surprisingly, under-utilizes the beautiful mountain vistas used for the film’s setting. There is the occasional, brief but stunning view, but the film is far from a visual spectacle. It doesn’t help that the story is full of contrived situations, like when Ben happens to find an abandoned cabin to use for shelter and warmth just moments before Alex falls into a freezing cold lake. Yet there’s an abundance of these sorts of expected “movie moments” like when Alex finds a recording of personal significance to Ben, that apparently he’s been carrying around with him everyday for 2 years. It just so happens to have some pertinent background information the writers didn’t know how to give us otherwise. There’s also the fact that she’s willing to fall for him despite the fact that she was desperate to get back home to get married to someone else. Surprisingly, she doesn’t say much about that “someone else.” Or there’s all the times the lead characters can’t seem to bring themselves to walk away from each other - it always results in a very cheesy, melodramatic turn and run back to each other.


All of this is to say, The Mountain Between Us is a very unremarkable survival film, in which the disaster is simply an excuse to put the two leads together so a romance can brew. It has very little to do with respecting nature or utilizing survival skills. In fact, the script doesn’t do much to acknowledge the threats all around them. A better director/writer team would have concentrated on the little details so the audience remained constantly aware of the threats, the amount of food available, and the passage of time. What’s there is muddled at best, if not completely overlooked. Yet as a romance, the film is also fairly unremarkable. It isn’t as though Elba and Winslet don’t sell it. In fact, they both fare pretty well despite the subpar material. The film just isn’t quite enough of either thing to be successful as a whole.

Posted by Zach Owens
Email ThisBlogThis!Share to TwitterShare to FacebookShare to Pinterest
Labels: 2.5, 2017, based on a novel, disaster film, romance, survival