This action thriller looks exactly like the kind of movie that used to star Jason Statham (Crank, or The Transporter come to mind. Or any of the other countless nondescript action thrillers he has been in). The cast here, however, does make it a bit more intriguing than some of Statham's films.

Most people know Jordan Peele for his comedy, whether it's his Comedy Central sketch show Key and Peele or last year's largely well received comedy film Keanu. However, Get Out makes his directorial debut and shows off his range as he makes the switch from comedy to horror. It follows an apprehensive black man going to meet his white girlfriend's parents for the first time. A boyfriend meeting a girlfriend's parents is always somewhat awkward. However, here there's an added bit of tension in the fact that many of the black residents of this small community have gone missing.

Based on the Chinese graphic novel Tibetan Rock Dog by Zheng Jun, Rock Dog is the story of a Tibetan Mastiff who leaves his village in order to follow his dream of becoming a rock legend in the city. However, following that dream inadvertently sets in motion a chain of events that threatens the safety of his village.

This is a peculiar Chinese/American co-production, that spent big money trying to share a Chinese graphic novel with a worldwide audience. It is the most expensive Chinese financed animated movie yet. They went as far as to get a large cast of well known actors and Toy Story 2 co-director Ash Brannon to direct, but it wouldn't surprise me at all if no one outside of China even knew of its existence. And unlike The Great Wall, another extremely expensive Chinese/American co-production, Rock Dog has done very poorly at the Chinese box office since opening last year. If it can't do well there, where people are already familiar with the source material, I can't imagine it doing much better here. 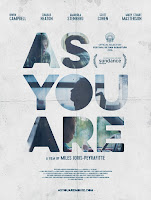 
This Sundance 2016 award winner casts Charlie Heaton (Stranger Things), Owen Campbell and Amandla Stenberg (The Hunger Games) as three teenage friends being questioned during a police investigation. They explore their memories in the telling and retelling of the course their friendship has taken.


Bitter Harvest tells the story a young couple struggling to get by during the Holodomor (Soviet man-made famine that caused the genocide of millions of Ukrainians) of the early 1930's.


Outlaw brothers Miles and Dominic unknowingly take refuge in a small, desert town inhabited by a psychotic family of cannibals.

This documentary asks a huge cast of recognizable comedians to sit and chat about the lives and work of stand up comedians.


An unemployed young man addicted to gaming is framed for the rape and murder of a teenage girl. With the help of two of his friends he sets out to uncover the truth behind the murder and clear his name.

My Life as a Zucchini

This critically acclaimed stop motion animated film is Switzerland's official entry for the 89th Academy Awards Best Foreign Language Film category. It follows a young orphaned boy as he moves into a foster home and struggles to find his place among the other orphans.


A documentary about tax evasion schemes in the UK and around the world - with narration by Dominic West and music by Radiohead's Thom Yorke and Massive Attack's Robert del Naja.


Punching Henry is a movie about a satyrical song writer gaining fame and a chance at a TV show after an embarrassing video goes viral on the internet. It only seems appropriate that this film fail to find an audience until it reaches online streaming services.

The Girl with all the Gifts


In this British post-apocalyptic zombie thriller, a teacher, a scientist and two soldiers go on a dangerous journey with a young girl who may just be the key to curing the zombie outbreak.


There's a surprisingly deep cast for this drama about an artist falling for a young married woman during the time of the Tulip mania of 17th century Amsterdam.

Year by the Sea


Karen Allen, best known as Marion Ravenwood in the Indiana Jones franchise, leads this small film based on Joan Anderson's book of the same name. After spending many years as a wife and mother, Joan (Karen Allen) escapes to Cape Cod to rediscover herself as her own person.