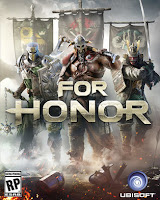 Just before the official release of For Honor, Ubisoft released an open beta (Feb.9-12) to stress test their servers and garner some excitement.

Just looking at the game it’s easy to write it off as a hack and slasher, but it’s far more unique than that. Today’s games industry is overrun with multiplayer focused first person shooters. Hack and slash games tend to be single player affairs - usually either RPG’s or punishingly difficult games like Dark Souls. Ubisoft Montreal wanted to do something a bit different. By combining concepts from a shooter, like Battlefield or Overwatch, with a fighting game like Street Fighter, they’ve created a compelling multiplayer game to fill a void we didn’t know existed.


There are 3 factions to choose from: Knights, Vikings, and Samurai (though picking one faction doesn’t keep you from playing heroes from the other factions). Each faction has 3 available heroes to play (though the full release will have more to choose from). Each hero has unique weapons and movesets (a la a fighting game). The game modes include a collection of the usual suspects like team elimination and domination, and each are playable either against other players or against AI - though even if you plan to play against AI you’ll still need an internet connection. 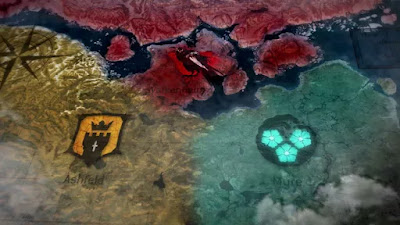 Successfully completing matches earns you war assets with which to deploy. The faction you choose upon initial setup is the one you’ll help to either defend or attack territories on the game map. Holding the most territory and/or winning the most rounds will earn special loot for you and the other members of your faction at the end of each season (lasting 14 weeks). It's worth noting that the faction war is cross platform, even if gameplay isn't. Nevertheless, the ongoing faction war gives the world a lived in quality as the struggle to defend and conquer new territories persists even when you’re not playing the game. Other rewards for completing matches include character customizations for weapons and armor that give boosts to different abilities (like stamina recharge rate among others). You’ll also earn in game currency which can be spent on unlocking new heroes or gear packs that unlock random cosmetic pieces for weapons and armor.


Game Modes:
The deathmatch modes (called either brawl or duel) includes variants for 1v1, 2v2, or 4v4 matches to be played either against other players or AI bots. The variants that include teammates allow you the freedom to choose to gang up on opposing players or observe honor in battle by allowing fights to play out in 1v1s until only one team is left standing. However, these usually start out as four separate 1v1s, as soon as one fight ends the remaining players gang up on those remaining. So if you notice some of your teammates have gone down, it’s worth making a run for it to try to revive them.

Dominion, For Honor’s 3v3 moba-ish zone control game mode, tasks players with capturing three objectives. The A and C flags are on the outside portion of the map, with one close to each team’s spawn zone. The B flag, however, is located in the middle of the map and ends up being where most of the fighting takes place. In addition to the 4v4 player vs player (or player vs AI) in Dominion, each team gets waves of smaller AI bots that congregate around the B flag. Even without a hero to help out, these AI bots will battle to “hold the line” while you and your teammates engage the enemy players. However, if there aren’t any enemy players nearby, you can still help your team by hacking and slashing these smaller AI bots. Plus, doing so makes you feel like an unstoppable killing machine. They can’t do much damage to you and go down extremely quickly, so it doesn’t take long to push them back, but it ends up being a constant struggle because of how easy it is for the opposing heroes to do the same to your forces.

For Honor’s combat is initially fairly easy to grasp, but tough to master, especially once you start unlocking some of the more advanced heroes. You’ll need to wrap your head around blocking and dodging in order to survive. Players who favor rapid offensive strategies might find success, but most of the time they’ll likely die fairly often either by draining their stamina or taking hits because they’re not defending against incoming attacks. Each hero plays a little bit differently so it’s worth checking out their movesets and practicing with them (button mashing is not a viable strategy). The three starting heroes are good all-around characters that feature decent range, damage and defense capabilities, but you can unlock characters who have better range, or others who favor close combat and speedy attacks but are weaker when defending. Overall the available heroes present a nice variety of playstyles and aesthetics, and most of them feel well balanced (though the whether or not balance changes are needed is something we’ll discover with time). Learning the fighting mechanics and performing them successfully can be challenging, especially against other players, but few games make winning your 1v1 battles so satisfying.

It's also a surprisingly pretty game to look at. The colors and textures all look photorealistic. Whether the sun is setting or snow is beginning to fall the environments look fantastic. The game also performs well with no perceivable lag and a consistently solid frame rate. And while I can’t speak for others, on PS4 I’ve had no trouble connecting to matches and have never been disconnected from one once it’s started.

The only complaints I could level at the game so far is the occasionally lacking loot and the somewhat convoluted menu system. I’ve gone several matches without earning a single piece of loot for my characters, or I've earned several sword hilts with similar bonuses and no upgrades for my armor at all. Earning loot a bit more often and being a bit smarter about diversifying the earned loot would go a long way towards that "one more game" mentality that so many multiplayer games strive for. And as for the menus, they aren't the worst I've seen, but they can certainly be confusing to navigate. I'm still learning my way around them even after a couple of days of playing the beta.

Overall I’m enjoying the game more than I thought I would. It helps that if I get frustrated losing to other players I can always switch to playing against the AI for some less tense practice. Doing so won’t keep you from earning the in-game currency or contributing to the faction war efforts as well. This is the kind of game I can see myself pouring many hours into and returning to even after I've put it on the shelf for a while. I can't wait until the full game releases and the matches and faction war starts to matter. It's releasing on PC, PS4, and Xbox One this Tuesday, February 14.