The Most Anticipated Films of 2017

2016 didn't turn out to be the greatest year for film. It was something of a letdown amplified by following one of the strongest years we've had in a while just the year before. As for now, things in 2017 are looking up. Though, there's still a chance many of these could disappoint, it's worth taking a look ahead to see what's on the horizon.

There are adaptations of Ghost in the Shell (starring Scarlett Johansson), The Dark Tower (starring Idris Elba and Matthew McConaughey), It (starring Bill Skarsgård) and Valérian and Laureline - titled Valerian and the City of a Thousand Planets (starring Dane DeHaan and Cara Delevingne).

For better or worse The Planet of the Apes, The Pirates of the Caribbean, Pixar's Cars, Alien, The Mummy (this time with Tom Cruise in the lead role), Fast and Furious, Transformers, and Despicable Me franchises will all be back on the big screen in 2017.

And after rebooting their MonsterVerse with 2014's Godzilla, Legendary is bringing King Kong back to the big screen in a reboot called Kong: Skull Island with a star studded cast (yes, they plan to eventually have the two giant monsters square off) - trailer here. 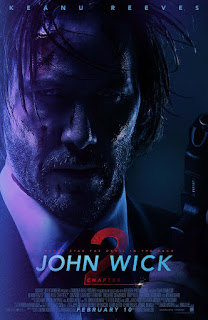 As for perhaps unexpected sequels, John Wick will return with a second chapter (unsurprisingly titled John Wick: Chapter 2 - trailer here), as will the popular 2014 British action film Kingsman: The Secret Service in Kingsman: The Golden Circle. And even though 2016 was the year of the far-too-long-after sequel (see Bridget Jones's Baby, Independence Day Resurgence, My Big Fat Greek Wedding 2, Zoolander 2, Crouching Tiger, Hidden Dragon: Sword of Destiny none of which faired well either critically or at the box office) Danny Boyle has seen fit to make a sequel to the 1996 critical and popular hit that put him on the map: Trainspotting. For whatever reason the sequel is titled T2 Trainspotting.

Perhaps one of the more interesting non-remake/reboot/sequels coming this year is The Bourne Identity and Edge of Tomorrow director Doug Liman's repairing with Tom Cruise for a film called American Made - set in the 1980's about a pilot working for the CIA as a drug runner in the south.

Now, lest this post grow too long and unwieldy here's a list of notable directors and their upcoming films for 2017 (in order by month):

Certainly this isn't a comprehensive list, but it gives an idea of what we have to look forward to this year. I'm a big Christopher Nolan fan, despite the shortcomings of some his more recent films, so I'm quite looking forward to his upcoming WWII thriller Dunkirk. And no matter how you feel about the direction they've gone, it's hard not to be anxiously anticipating another Star Wars film. But if I had to pick one movie as my most anticipated film of 2017 it'd be Denis Villeneuve's Blade Runner 2049.

Villeneuve is such a talented director. He gets great performances from his actors, but maybe more importantly he is a master of tone and filmmaking craft. Sicario and Arrival are two of my favorite films of the last few years, so the fact that he's taking on a film franchise like Blade Runner is seriously exciting.


What are you most looking forward to? Did I miss any movies of note?