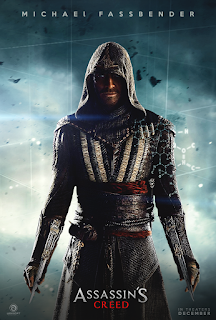 It's astounding how quickly you realise just how absurd a video game's story is once the franchise has produced a feature film. Now, to be fair, the Assassin's Creed franchise probably still has the ability to make a good feature film, but Justin Kurzel's (director of Macbeth) take is sadly not it. Despite working with considerable talent, Assassin's Creed plays like a rushed, overly green screened, series of action sequences with very little narrative glue to hold them all together.

Sophia wants to proceed slowly and with caution considering Cal Lynch is the last, best chance to recover the artifact. His assassin ancestry not only explains his personal tendency toward violence that put him in prison, but also why the Templars need him. It was his ancestor who was around to have seen the Apple during the Spanish Inquisition. So it makes little sense when Alan continually pushes Sophia to produce quick results. He wants to have it in-hand for show and tell during a Templar get together toward the end of the film in which he can further impress his colleagues. However, considering Lynch is likely the key, caution may have been the better route. But that’s only one reason the plot machinations here make little sense. They'll just leave you confused once you start to try to analyse them.

Lynch is introduced in flashback as a child forced to flee his home when his father, for unknown reasons, kills his mother just before a large group of gun-totting Templars infiltrate their small home. Nevertheless, when he ends up forced to work with them as an adult, he’s all too willing to oblige if only to try to take their prized possession away from them once it’s been found.

And why do they want this Apple of Eden? In a twist on the biblical story, they believe it to be an ancient artifact that controls free will rather than a simple piece of fruit that tempted Adam and Eve to sin against the God that created them and gave them free will. Once the Templars have the artifact, they intend to use it, through means unknown, to control humanity’s free will thus ending criminal activity once and for all. Yet, once we get over the absurdity of that scenario and stop asking questions about how that would actually work - because the film never ponders those questions - we’re still left with the moral and ethical dilemma it presents. Sadly the film also never bothers to explore those dilemmas. It simply accepts the Templars desires for control at the cost of free will, and that Assassin’s will battle them for eternity to keep them from achieving it.

What the film gets wrong about the games is their purpose of exploring the various memories. In the games they don’t know which memory is tied to which historical event. Therefore they enter memories as if a mystery, exploring each for clues and assassinating particular targets in order to extract specific information leading to the next set of clues. Here they enter random memories at random simply because they allow for cool looking action set pieces. Rarely is there stealth or assassinations. Usually it’s over-the-top chase sequences. One of them takes place on a fast moving carriage, and another has Lynch and a female cohort escaping a death sentence despite being surrounded by murderous Templars.

And that leads me to the side characters. If there is very little character development for the present day characters (or the film’s central characters for that matter), there is even less for the people he interacts with in the memories. His female assassin cohort from the memories - whose name wasn’t an important enough detail for the film to impress upon me - gets so little screen time, and so few lines within that small amount of screen time, that all attempts to make us care about her well-being late in the film are completely wasted. And as for the present day side characters, the other assassins being held at Abstergo all have very minimal interactions with Lynch, which makes their cooperation late in the film (if you can call it that) feel completely out of left field. The ease of which we are made to root for these other assassins is directly related to our disdain for the Templars rather than the film building up these characters as people worth rooting for.

The film rushes at such a breakneck pace that there is no time whatsoever for character moments. There is no time to breathe in this alternate world. There are so many things going on and so many details the film either assumes you already know or is willing to leave out entirely that you'll wonder what happened to the 20 minutes that explains what happened in the films finale.

But as we know, video games aren't just about stories, they're about gameplay. And Assassin's Creed is a series that has ridden it's clever fight mechanics, it's running, jumping, climbing and otherwise parkour-style exploration through years worth of games. Yet these are things we can only watch in the film. And the fights and parkour, while vaguely resembling some of the things seen in the games, are so shoddily edited with shaky, too close camera shots and quick choppy edits that the action gets hard to follow very quickly. It's a far cry from the smooth climbing, running and combat mechanics of the games.

Without the fun of exciting action, character development and proper storytelling we're left with a very thin plot put into action by weak, underwritten characters. I had hopes that 2016 would be the year video game movies matured and became a viable source for film franchises. However, the crop of video game movies we got only further reinforced the stigma that games just don’t translate well to cinema.