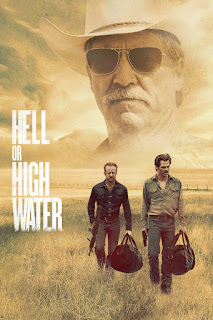 It’s a shame so few notable or critically acclaimed summer films came out this year, yet even the good ones seemed to go unnoticed. That seems to be the case for Starred Up director David Mackenzie’s Hell or High Water, a well crafted, well acted western about bank robbing brothers trying to stay a step ahead of a wise old Texas Ranger close to retirement. Certainly there are shades of No Country for Old Men here, though the comparison cheapens Mackenzie’s achievement.

The film takes place in a handful of small rural towns in the hot dry climate of Texas. In fact it’s so hot and dry the wind seems to have stopped altogether and the flat landscape begins to resemble the dusty trails of classic western films. The brothers Tanner (Ben Foster) and Toby (Chris Pine) have begun an intelligently designed plot to carefully rob small, loose bills from cash registers at Texas Midlands banks in small towns across Texas with low population. They specifically choose Texas Midlands banks for their lacking security - none of the security cameras work - and for some sense of poetic justice since the bank is threatening to foreclose on their ranch if they can’t pay off their debt. The brothers intend to steal enough money to pay off the ranch and give it to Toby’s sons. The recently discovered oil on the ranch should afford them the sort of comfortable life Toby and Tanner could never afford.

Toby split up with his wife and sees this as an opportunity to finally do something right for his kids. If Toby is the planner, Tanner is the one wild enough to see it through. Tanner agrees to the plan for the sake of his brother, but it’s clear he’d rob banks just for the adrenaline rush. In fact, when Tanner goes off script and robs a non-Texas Midlands bank while Toby isn’t watching, it leads to enough eye witness accounts to keep the Texas Rangers hot on their trail.

That's where Jeff Bridges’s Marcus Hamilton comes in. He's the wise old Texas Ranger who catches on to the brother’s scheme almost as soon as he happens upon it. And because he’s a workaholic not ready to accept retirement - even sensitive about the idea of retirement - he clings to the case as if his career depended on it. Yet writer Taylor Sheridan (writer of Sicario) and director David Mackenzie refuse to let that be the extent of his character development. They make a lot of room for small character moments, many of which add brief bits of levity to a story that may have otherwise felt overly gloomy. Initially, being with the crotchety old Ranger and his Native American partner Alberto (Gil Birmingham) is enjoyable. They’re like Statler and Waldorf, the two cantankerous muppets heckling everyone, including each other. Yet as the film goes on, their relationship proves more toxic. Marcus’s comments about Alberto frequently cross the line into racially insensitive areas, and Alberto angrily fires back comments about Marcus’s age and impending retirement.

One scene in particular has Marcus and Alberto staying in a hotel for the night. Marcus mercilessly teases Alberto without seeming to notice how upset it's making him. Then Mackenzie gives us a brilliant bit of crosscutting that shows the cops and robbers as mirror images of each other. As Alberto lays on his side trying to ignore Marcus’s comments it cuts to the brothers in another hotel and Toby similarly laying on his side trying to ignore his brother's inappropriate activity. Neither Marcus nor Tanner make good role models or pleasant company. But neither duo can stay mad at each other for long. Putting aside differences for the greater good is part of what it means to be partners and/or family, and it's clear Marcus cares about his partner just as Toby cares about Tanner. Mackenzie’s mirroring of these relationships is one of the aspects that continually elevates the film.

Hell or High Water benefits from Taylor Sheridan’s strong writing, Dave Mackenzie’s clever direction, strong performances from Bridges, Pine and Foster (even if you might be getting tired of seeing Foster play this sort of character), and strong cinematography by Giles Nuttgens, who frequently took advantage of Texas’s picturesque plains.

Yet Mackenzie proves to be a lackluster director of action. Most of his action scenes are short and to the point, rarely do they opt for flashy gunplay or interesting staging. That’s not particularly problematic unless you’re looking for a good old fashioned western. Instead Mackenzie relies on his character driven narrative’s ability to invest the audience in these scenes whether they serve up tense, well directed action or not. And for the most part his strategy works. Though the film’s finale fizzles a bit more than it should, despite recalling Raoul Walsh’s 1941 Humphrey Bogart star vehicle High Sierra. However Mackenzie makes up for it by adding an epilogue that helps tie things together and leave this lived in world with the open endedness to live on.

It may not feel like a big budget summer film, but it’s one of the best summer releases of the year. It’s disappointing then that it didn’t get the audience it deserved (admittedly I missed my opportunity to see it as well). Perhaps now that it’s available to rent, that may change. It’s one of the best films I’ve seen this year.