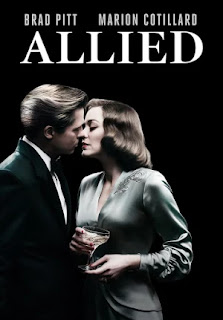 Generally speaking I find Robert Zemeckis to be one of the more underappreciated big budget studio directors working today. He has a growing library of fan-loved commercial successes in films like Romancing the Stone, the Back to the Future trilogy and Who Framed Roger Rabbit, but he also has a number of critical successes that earned Oscar attention in films like Forrest Gump, Cast Away, and Flight. Yet somehow he ends up being overlooked when compiling lists of best directors. Perhaps that’s because he fits somewhere in-between directors like Steven Spielberg and Ron Howard. He’s lesser Spielberg, but typically better than Ron Howard.

His latest is a World War II romance with a hint of suspense, despite what the much more tightly edited trailers may have been trying to sell you. It casts Brad Pitt as Max Vatan, a Canadian airman working undercover alongside Marion Cotillard’s Marianne Beauséjour, a French resistance fighter having recently escaped France after the rest of her resistance group was killed. They pose as a married couple with connections to the Nazis in Casablanca in order to assassinate a German ambassador.

As you might expect two beautiful people such as this working in close quarters, posing as a married couple, and possibly heading toward their doom they quickly fall for each other for real. Or at least we’re meant to trust Max's feelings are real, but we can't be sure about Marianne whose work dealt in passing off fake emotions as real ones. Nevertheless, having completed their mission, they get married and move to England where Max continues working for British Special Operations Executive (SOE). However, a year after getting married and having a child together, news is given to Max that his wife is suspected of being a German spy. His mission is to test her to see if she passes on fake information. Should she do so, he is to kill her or be hanged for treason.

The rest of the film follows Max - the one person we’re supposed to trust implicitly throughout the film - through a twisty series of events as he tries to prove her innocence. Cotillard is particularly effective as the wife who might be keeping secrets. She’s able to portray complex emotions while maintaining an air of mystery about her. Pitt, on the other hand, broods over his inner turmoil throughout much of the film.

Zemeckis tends to rely heavily on CGI, and Allied is no different. For the most part it looks pretty good, but there are a number of instances where it becomes painfully noticeable - particularly in the film’s sandstorm sex scene. But that isn’t to say there aren’t some spectacular set pieces that lend to the chaos of a world at war. One in particular sees Marianne giving birth during an air raid, while another has a plane shot down just outside their charming little home during an evening party. The crashed plane is later used as a background to a sunny, peaceful picnic.

The thing that makes Allied work is its strong sense of nostalgia for wartime films of classic Hollywood. No it isn’t a modern Casablanca, though it seems to be channeling the beloved classic much of the time. Considering Pitt’s character is an airman it even vaguely recalls Howard Hawks’s 1939 film Only Angels Have Wings. And while Pitt turns in a solid enough performance, he’s neither as charming as Cary Grant nor as cool yet world weary as Humphrey Bogart in Casablanca. His performance falls more on the Grant side of things. He has to conjure a bit of charm in the early portion of the film while putting on a performance within a performance, yet the second half of the film flips the gender roles of Alfred Hitchcock’s 1941 film Suspicion. There Grant played the character we suspect of foul deeds and bad intentions to Joan Fontaine’s innocent lover growing ever more fearful. That’s where things could likely have been improved. Marion Cotillard gives the stronger performance, but that only makes me wish their roles had been reversed.

And as for the Casablanca similarities, many are as simple as the clothing and locations. Others are more significant, but an important one fails badly enough that part of the finale nearly falls apart. It hinges on the sympathy of secondary character that’s a fairly transparent representation of the Claude Rains character in Casablanca. Yet he’s so poorly established throughout the film that his role late in the film feels like a plot contrivance rather than the start of a beautiful friendship.

Now, Allied my be likable enough for its similarities to old wartime Hollywood films - Zemeckis even shot and edited the film to feel like a classic Hollywood film - and while the excellent production and costume design lend to that feeling, Zemeckis’s insistence on deliberately slow pacing does tend to hurt the film overall. The trailers advertise the film as a tense suspense film, but rarely does the full film actually aim for suspense. Rather it becomes a mystery/romance with a somewhat lacking sense of urgency. And the romance is constantly betrayed by the sense that these are dishonest characters in the business of keeping secrets. The fact that we are supposed to question their honesty makes it that much harder for the film to sell us on their real feelings for one another. For many, the film simply won’t be able to do so. And that’s where the film has divided audiences. If the core romance works, Allied will be a satisfying and well crafted film. However, if it doesn’t, it’ll be a bland film whose promise of suspense goes mostly unfulfilled.

Count me more in the former. I appreciated Zemeckis’s ability to pair big budget effects with a smaller, more personal wartime story. I appreciated the performances by the two leads, the production and costume design, and even the references to classic Hollywood war dramas - even if they don’t all contribute as well as I would have liked. Allied is a flawed film, but more of it works than doesn’t.