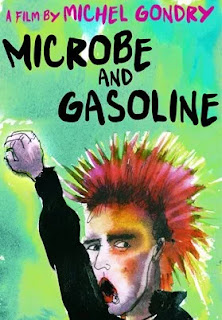 This little indie film from French director Michel Gondry is a surprising change of pace for a director whose strange, divisive, yet elaborately hand-crafted style was growing more and more eccentric since his breakout success in Eternal Sunshine of the Spotless Mind. His last film, Mood Indigo, was so out there, this film almost feels as though it were by a different director. Yet there’s something about it that is so perfectly Gondry, that it almost had to have come from his mind.


Daniel (Ange Dargent) and Théo (Théophile Baquet) are misfit teens. Daniel is constantly mocked for being small for his age - hence the nickname “Microbe.” And if that weren’t bad enough, his long hair and slightly feminine features cause both students and teachers, whether inadvertent or not, to call him a girl. Of course, all of these things make it difficult for him to win over the girl in class he likes. She’s a friend, but she’s made it clear he’s in the “friend zone.” He’s also the creative type that prefers to draw and paint than go out for school sports teams or become a punk rocker like his older brother.

Théo, on the other hand, is the new kid in school. As such, he’s already an outsider, but he prefers it that way. He sports a cool pleather jacket and rides a bike that’s been modified with a soundboard so he can play sound effects as he rides. He earns the nickname “Gasoline” for his tendency to smell like gas everyday after helping his father work on cars.

The two connect over shared fascination of Daniel’s art projects and Théo’s mechanical prowess, but most importantly they’re willing to accept each other for who they are. They’re opposites, yet that’s partially why they become such good friends. Daniel wants to be accepted in school but isn’t, whereas Théo couldn’t care less about connecting with others. Théo’s parents are rarely available for him, but Daniel’s are suffocating. Daniel is so accustomed to doing and thinking as he’s told that he fears he is unable to think for himself, whereas Théo has spent enough time taking care of himself that he is world wise beyond his years.

One of the things Gondry gets right is the teenage politics. This film exists in the way teens communicate, the hopes, dreams and fears of that age. A time in life when cliques, social status, and dancing with a girl at a party were of chief concern for most. And if you managed to get by without a reductive nickname, you were one of the lucky ones. For better or worse, friendships and acquaintances began and ended with the start and end of classes. It’s these finer details, that are easy to remember but harder to pin down in writing and on film, that makes Microbe and Gasoline such a joy to watch.

It’s all their social difficulties at school and at home that make them look for a way out. "We can't blossom in this lousy environment," Théo laments. When they find a working motor at a junkyard they concoct a plan to build a motorized house with which to escape. The bonus is that the project lets them use their individual skills. Daniel draws up the plans and Théo builds it. They even think to make a flap with which to hide the wheels in order to fool passing police officers into thinking it’s just a miniature house someone built by the road (it’s not street legal and they aren’t old enough to drive legally).

The boys search for Théo’s childhood summer camp is telling -he remembers it from when he was 8. Throughout the film they struggle with the feeling they’ve mentally outgrown their physical bodies. But, as we know, adults don’t take them seriously due to their youthful appearances. The only option is to return to a simpler time when they were happy. We leave childhood all too soon, but it takes so long to be an adult. But you can never go back to a time that’s past. As such it’s not surprising their journey is continually thwarted by present realities.

Realities play such a significant role here that Gondry -known for his whimsical imagination- shows significant restraint with his filmmaking. Even the sequence devoted to finding parts and building the vehicle feels particularly restrained for him. Between Mood Indigo’s flying cloud car, The Science of Sleep’s full sized toy horse, The Green Hornet’s crime fighting car, and even the motorized bed driven by Jim Carrey in the short Pecan Pie (a product of some spare time during the shooting of Eternal Sunshine of the Spotless Mind), Michel Gondry is quickly amassing an eclectic collection of movie vehicles. The house car here and the way he goes about employing it is perhaps the least whimsical of all, but that’s not a knock on it. On the contrary, it's fitting of a youthful imagination while still being grounded in reality for a film that needed the restraint.

But the vehicle isn’t the only thing that’s an identifying feature of a Gondry film. There’s also the strong performances by leads Ange Dargent and Théophile Baquet. They play their individual roles well, but shine whenever they’re onscreen together. Gondry has always been a talented director of actors. The writing and plot points here are full of spontaneity in imaginative ways that evoke a sense of youth in only ways Gondry can. It endears these characters to us from fairly early on.

It may not be his most stylistically impressive film, but it’s certainly one of his most accessible. Less like Mood Indigo, more like Francois Truffaut's Pocket Money. If over the course of his filmography, his unique visual style had begun to grow stale and his narratives unapproachable, this satisfying coming of age story will be a pleasant change of pace.