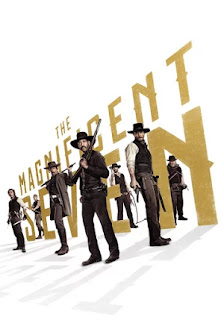 Antoine Fuqua’s remake of John Sturges’s The Magnificent Seven, which was itself a remake of Akira Kurosawa’s Seven Samurai, is a mildly entertaining western with a diverse cast. I say “mildly entertaining,” because it has just enough action to keep the audience in their seats. Yet the film plays so flatly, and the characters just as flatly, that it simply can’t live up to the legacy of the films it’s remaking.

As you likely know, the story involves a town of poor farmers being taken advantage of by a cruel group of bandits and thieves. The townsfolk recruit a duly appointed warrant officer and a ragtag group of strays with a talent for gunfighting to fend off an impending attack by the bandits. These seven gunmen take their time teaching the townsfolk to fight for themselves while setting up their defenses. And of course it all culminates in a wild shootout.

There are a few feats of gunplay in order to establish the skills of each of the seven, but otherwise only a few of them feel like established characters. One of them is Denzel Washington’s Sam Chisolm. He’s the duly sworn warrant officer from Wichita, Kansas, and the leader of the seven. He also has a history that involves personal angst against the primary villain, Bartholomew Bogue (Peter Sarsgaard). Bogue is man made out to be pure evil. He has no backstory, and no depth. But he does indiscriminately kill the good people of the village Chisolm is asked to protect.

Chris Pratt plays “the gambler” Josh Faraday, a charming rogue with a sense of humor. He’s the equivalent of Toshirô Mifune’s comic relief. Characters supposedly as funny as they are deadly. Pratt doesn’t play the character as over-the-top as Mifune, but the purpose remains the same. He’s fast and accurate with a pistol, but he’d prefer to play cards, do card tricks, or play with dynamite. The only problem is the script doesn’t give Pratt much to work with. It tends to rely on his stardom rather than giving him a compelling character to play.

Next they meet up with Goodnight Robicheaux (Ethan Hawke) and his friend Billy Rocks (Byung-hun Lee). Goodnight is a former Confederate sharpshooter haunted by past battles. Yet it becomes something of a pain point the longer the film goes on without addressing the things that are haunting him. Instead the script dances around his past without ever addressing it directly. Billy, however, is an unflappable, knife wielding assassin with little known backstory whatsoever. We don’t know why, but wherever Goodnight goes, Billy is sure to go as well. Yet that becomes a problematic symptom of this script. There are so many bits of vague backstory and subplots that get talked around rather than fleshed out.

Next they add notorious Mexican outlaw Vasquez (Manuel Garcia-Rulfo), skilled tracker Jack Horne (Vincent D'Onofrio), and mysterious Comanche warrior Red Harvest (Martin Sensmeier). And the introduction I just gave these three is about as interesting as the ones the film gives them. Each of these killers enter the fray lacking more depth than the last. It so poorly establishes its seven primary heroes and their various reasons for joining the group that by the time Red Harvest joins - the last one to join the group - he feels like a complete afterthought whose reason for joining is never revealed.

It isn’t as though there is no depth, but what is there is pretty thin. The most recognizable faces - Denzel Washington, Chris Pratt, and Ethan Hawke - get the wealth of the screen time, but that relegates the other four to background roles. There’s also some odd choices made that distract rather than help the film. For instance D’Onofrio’s Jack Horne speaks in a peculiarly high pitched whimper throughout the entire film, and Hawke’s Goodnight takes a small break from the team only to reemerge in a later scene that serves as neither a heroic act nor much of anything really. There’s also some strange editing now and then. One early scene involves a would be tense encounter between Pratt’s Josh Faraday and a couple of pistol wielding, card players out for revenge. But it’s intercut with a calm chat between Washington’s Chisolm and Haley Bennett’s Emma Cullen. She’s the woman who seeks help after Bogue’s initial nefarious deeds. These two scenes play so poorly off each other that when combined they noticeably ruin any tension or tone they might have established separately. Yet that’s just the tip of the iceberg in terms of the issues with tone and pacing here. It has so little urgency and energy that its slow trudging pace feels downright laborious.

But the most bizarre choice was withholding Chisolm’s primary reason for accepting the townsfolk meager reward and dangerous request until the very end of the film. It seems to be meant to play as a twist, but by the time the reveal happens it’s too late. Instead it simply turns out to be a missed opportunity to add stakes and an underlying driving force with which to carry the film.

And as for the villain, Peter Sarsgaard’s Bartholomew Bogue might as well be a cartoon character, or at least a comic book villain. His over the top introduction feels like an entirely different character to the one who shows up for the finale. They’re both evil, but seem to be polar opposites in every other way.

For the most part the film follows the sequence of events to its inevitable conclusion. Even without having specific memory of the source material(s), this film becomes entirely predictable (it had been years since I’d seen either Seven Samurai or the original Magnificent Seven. I’ve since rewatched them both and they are far superior). Films don’t come much more predictable than this. At every point I knew where the film was going and what it was going to do next. It holds no surprises, even when it’s clearly trying for them.

It also withholds the brilliant, iconic score by Elmer Bernstein until the closing credits. An odd choice considering what it could have added to the film throughout. In its place is a forgettable score that never tries for recreated versions of Bernstein’s work. Another missed opportunity.

The most admirable thing about Fuqua’s version of the story is that it involves a remarkably diverse cast. Something Fuqua himself pushed for. The cast includes an African American, a Korean, a Mexican, an Indian, and allows a strong female to play a significant role among the townspeople. They don’t worry about things like rape of the women the way the older films do or racism, considering the time period, the way other films might have. In fact, there’s no discussion of either, and the film is better off for it. In a time when Hollywood continues to see backlash over casting decisions that repeatedly leave out minorities, it’s good to see a big budget blockbuster that brings together such a diverse cast in friendship and camaraderie. Yet considering that the cast is perhaps the only strong point here, it’s dumbfounding that there is not a single memorable character or performance worth praising. Another missed opportunity.

If by making this film more people from younger generations seek out Akira Kurosawa’s Seven Samurai and John Sturges’s The Magnificent Seven dare I say, this may still have been worth the effort? It’s just a shame Fuqua and company didn’t produce a version worthy of the legacy of the two films it was remaking. What we have here is seven flat characters and a few other missed opportunities.