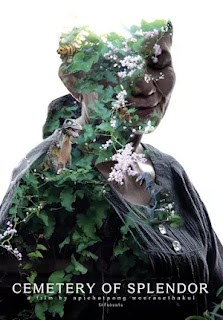 Cemetery of Slendor, the latest film from critically acclaimed Thai filmmaker Apichatpong Weerasethakul, is nearly impossible to explain. It’s a dreamy film about people who either can’t sleep or can’t stop sleeping. As such, perhaps it makes sense that it is a somewhat bizarre and dreamy little film. We enter and exit scenes or sit pondering movements and changes in color as if stuck in a dream. We don’t know how we got there or where we’ll go next, but it’s hard not to continue watching with trance-like wonder.

Jen (Jenjira Pongpas) is a volunteer at the school-turned-hospital where a group of soldiers lay unable to wake from their deep sleep. They’re all suffering from an unknown condition in which they sleep for long periods of time. She takes to looking after Itt (Banlop Lomnoi), a man with no relatives to take care of him. Soon enough she begins to consider him a son. She bathes him and chats with him, believing he can still hear her in his sleep. Every once in awhile he wakes up long enough for them to go on walks, eat a meal, and talk for a while. But soon enough sleep overtakes him and it’s back to the hospital.

The doctors install arched lights over each bed that pulse and change their colors all day and all night. They begin with green, then slowly change to red and then blue. Each color illuminates the room with a bright glow. They’re said to help the sleeping patients have good dreams. They make for such an interesting visual that Weerasethakul frequently rests the camera on them for minutes at a time. I suspect the colors hold a deeper meaning I have yet to uncover. Nevertheless, the slow way they dissolve from one color to the next, while hovering over the sleeping men, is used to play against the image of a series of escalators moving in opposite directions ferrying people around a mall. The two images are superimposed for quite some time as one dissolves to the other. It’s one of film’s most memorable visual sequences.

After Jen goes to pay devotion to two goddesses, they appear before her in the flesh. They explain to her that the hospital sits on an old cemetery where great kings of the past are buried. Dead or not, they exist in another reality continuing to fight great battles for which they’re borrowing the spirit energy of the sleeping men. Their story is confirmed in conversations Jen has with Itt when he awakens. He tells her that while he’s awake he suddenly has heightened senses. He can smell and taste all the individual ingredients in the food he’s eating and he can even tell how hot the light bulbs in the room are. More interesting, however, are the conversations Jen has with Itt while he’s sleeping.

A young psychic woman frequents the hospital to serve as a communications method for the wives of the sleeping soldiers. She can read their minds even in their sleep, allowing her to enter their dreams and communicate with them. The wives ask their sleeping husbands for their thoughts on the latest goings on in their homes and listen to descriptions of the historic places the men are going.

While all of this is happening there are government agents digging nearby for unknown purposes. Worse yet, they threaten to close down the hospital at any moment. One striking image shows a group of children forced to play soccer in the midst of mounds of dirt created due to the digging that has ruined their play space. While it’s not stated explicitly, we can possibly surmise that the dreamy battles of the past are somehow connected to the government’s movements on the surface.

Perhaps the most interesting scene involves Jen walking and talking with the psychic, who has transported Itt’s sleeping consciousness into her body. Itt, through the psychic, shows her around the historic palace that no longer exists in the present.

There is an underlying world of imagery that the film imagines without ever showing. There are, after all, two separate timelines playing out in parallel. However, just like Jen, we’re unable to see this other world, but through interactions with a psychic we’re granted a vision of sorts. On this tour we see nothing but trees and grass, but Itt describes the grand palace they’re walking through. The only thing we do see are the remnants of statues from some long forgotten civilization.

Cemetery of Splendor is the intersection of the mundane and the supernatural. It’s for those willing to see the splendor of everyday life. On one hand it feels like a slice of life film where we spend time with Jen and the people of this small town going about their daily lives. Film can be a tool for transportation and empathy, and slice of life films are the best examples of this. Yet even if Cemetery of Splendor is made up of slice of life moments, it’s more about past and present coming together. Though, admittedly, even that description sells this film short.

In many ways I’m reminded of the works of Japanese author Haruki Murakami. He’s known for stories that similarly involve the mundane of everyday life and the unexplainable or even the supernatural. These types of stories grant our ordinary world with extraordinary powers. We are looking at the tip of the iceberg, wondering how much is hidden beneath the water’s surface. These stories don’t just transport us to another country - though they do that as well - they show us the past, or even another dimension, or spiritual plane altogether, running parallel with our present reality.

If I had to equate this film to another cinematic experience, I’d say it were most akin to Jacques Tati’s Playtime. Both directors shot the majority of their scenes in still camera setups. Rarely if ever does the camera move. Yet movements and lights within the frame draw the eye where the director intended. Similarly both films also allow conversations to play out in long takes with no closeups or shot reverse shots. Both films show scenes of random everyday life from a distance. One shows a park with several seating areas. Several people begin moving back and forth from seat to seat as if trying to find the best place to sit. Eventually the whole park is full of people moving back and forth only sitting for a moment before moving to another seat. It's like a spontaneous game of musical chairs. And the movements of people walking across the screen is not unlike that of the escalators ferrying people in opposite directions from earlier in the film. These shots are not terribly different from Jacques Tati’s scene observing the flow of traffic in Playtime, even if the purpose is likely different. And finally both films move from scene to scene in ways that continue the narrative even if the narrative itself almost isn’t the point at all.

For western audiences Cemetery of Splendor will be, without doubt, an enigmatic experience. I suspect much of the culturally specific imagery and metaphors were lost on me. However, viewing this film is still a meaningful experience even if it’s nearly impossible to articulate why. I simply don't have the lens to decode Weerasethakul’s full meaning. Like Jen, I require a guide to see the splendor hidden underneath the surface.