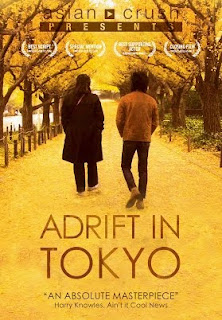 Quirky offbeat humor abounds in Satoshi Miki’s 2007 slice of life film about a penniless college student forced to connect with an amiable debt collector in order to pay back what he owes. In fact their friendship begins much like that of Russell Crowe and Ryan Gosling in The Nice Guys, with Crowe intimidating Gosling in their first meeting, only to become partners shortly after. Here its Tomokazu Miura’s gangster debt collector Fukuhara putting pressure on Joe Odagiri’s penniless college student Takemura.

Takemura certainly doesn’t have enough money to pay back the debt of 840,000 yen he owes. So despite his wariness, he accepts Fukuhara’s strange offer to settle the debt (and even earn a bit of extra spending money) if he accompanies him on walks around Tokyo. Miki peppers in some fairly obvious symbolic images in these early scenes. One involves Takemura stumbling upon a lost key that opens a nearby storage locker with a bag full of Daruma dolls. They’re a symbol of good luck. Though also in the bag is the broken off nose of a Tengu mask, which Fukuhara notably tries on for size. The mask is made for the Japanese god Tengu, who is known to be just as likely to protect people as he is to hurt them. Fitting then that Fukuhara is the one to try it on. However, as Fukuhara gives Takemura his offer, they’re overlooking a large collection of carnivorous plant life. Of course Fukuhara feels like the fly having just landed on one of them. These are, of course, examples of obvious symbolism, but they’re effective nonetheless.

Once they begin their walk, Fukuhara gives Takemura the details. After an argument, in a fit of rage, he hit and accidentally killed his wife. However, it’s clear he regrets what he did, because he is determined to turn himself in and accept nothing but the steepest penalty. It’s also clear, despite what he did, he did care for her, because the last thing he wants to do with his freedom is take one last walk on his wife’s favorite route, making stops at their favorite places along the way.

But because Fukuhara has company, which he claims is simply to avoid loneliness, he allows Takemura to make a few alterations to the route in order to see a few of his childhood stops. This, of course, brings out childhood memories and the admission that he was abandoned by his real parents.

As such, this film may sound melodramatic in its exploration of tragic situations, but Miki never allows his leads to wallow in emotional turmoil. Instead they remain positive, even laughing with one another in their discussions of strange everyday occurrences, like the way women hold out their designer wallets hoping others will notice. Some of these scenes play a bit like a piece of Jerry Seinfeld stand up in which he makes a mockery of the simple everyday things in life. It’s a rare film that tries for comedy and maintains such a positive outlook despite such down-on-their-luck characters. Yet Miki consistently makes it work.

It’s for that that this film feels so charming and these characters so likable. Miki even finds a way to meander into the film’s emotional high point as he conjures a conventional family setting as if from nowhere. Fukuhara, in his various business dealings, has a fake wife with which to lay low in times of need. It’s an arrangement that’s proven mutually beneficial, but this time the woman’s niece shows up unexpectedly around the same time the guys do. As they sit together to enjoy supper - likely the last home cooked meal Fukuhara will have for some time - Takemura is given a moment to relish this happy family scene he never had growing up.

For some, Miki may just indulge in a few too many throwaway gags, but they achieve the intended comic relief often turning “everyday situations” into the butt of the joke. It may feel aimless at times, but there’s value in the aimless time spent among friends, especially for these two. This is exactly the sort of meandering, slice of life films I have a soft spot for (see The Taste of Tea if you want another good example). Their tour through the back alleys of Tokyo grants foreign viewers, like myself, a window into another place. Adrift in Tokyo is meandering but enjoyable, and remains effortlessly charming throughout.