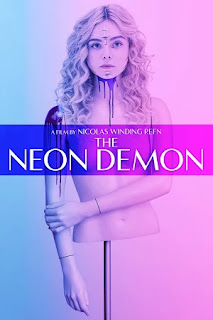 Nicolas Winding Refn’s latest film, The Neon Demon, is a dreamlike exploration of vanity. Many are calling it Refn’s critique of the fashion industry and its affect on women. However, much like the people working in the modeling industry who value beauty over all else, Refn tends to lose track of his characters and their story in favor of beauty shots. They are indeed artistically shot images of beautiful people and dreamlike scenarios, and they tend to grow in abundance as the film wears on. But the further down the rabbit hole he goes exploring these Stanley Kubrick inspired dream sequences, the less meaningful they become.

Elle Fanning plays Jesse, a 16 year old with aspirations to make money off her physical beauty. She explains to her almost boyfriend Dean (Karl Glusman), that she has no skills or special talents, but she has her beauty. This admission is one of the few human moments to be had. Nevertheless, it’s a career choice she feels increasingly more confident in as more and more important people notice her. An early scene in which she interacts with a pair of established models sets the tone for what she can expect moving forward. They ask her very pointed questions she’s obviously not comfortable answering. They also tell her she can expect two reactions from people. One will be people noticing her for her youthful good looks, the rest will be for her potential to steal jobs from them. What they don’t tell her is that everyone will want something from her.

Along the way we see models get passed over in favor of Jesse’s youthfulness. Age is an all too important factor. We see how important the subjective opinions of creepy male figures are. Though there are plenty of creepy females in this film as well. In fact, most of the people in this film move and speak much like the robotic aliens of Under the Skin. They stand and stare. They slowly look people up and down. Every interaction seems to be teeming with hidden intentions. And the film never strays far from Under the Skin’s dark tone accentuated by slow moving camera shots, stark lighting, high contrast color palette, and moody synth beats on the soundtrack.

However, The Neon Demon never truly becomes the character study it wishes it were. Jesse is a naive girl not ready for the limelight. She lets herself be consumed by her fast success. Having burnt enough bridges along the way, whether intentional or not, she ends up with more enemies than friends. Fanning gives a fine performance, but Jesse’s descent into conceitedness seems to happen overnight. The slow burn way the film opens contrasts with it’s rushed final act. And as Refn explores his dark dreamlike visuals for all their beauty, whether shocking or grotesque, they begin to stop contributing to the story. Rather they become weightless and empty. It seems to express its themes with no conviction.

If only Refn had spent less time descending into abstract art and more time allowing his story and characters to germinate, The Neon Demon wouldn’t feel like the same sort of failing its central character suffers. Despite all of this, it’s still being called one of the most visually striking films of the year. Perhaps that’s an apt description. However Ben Wheatley’s lackluster film from earlier this year, High-Rise, earned similar praise. Both are examples of loudly expressed themes, paper thin plots, and ultimately stories lost to style over substance.