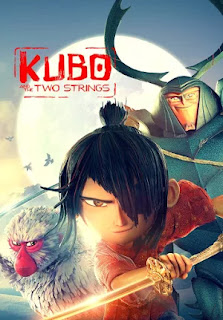 If you’ve seen one of Laika’s stop motion animated films before (Coraline, ParaNorman, and The Boxtrolls to name a few), you know their brand of family friendly film typically involves images and scenarios scary enough to give kids nightmares. Part of what makes them scary, aside from the supernatural villains, is their eye popping visuals. Fortunately they use their creativity for more than just creepy images. Laika has become so good at creating smooth, natural movements that you’d be hard pressed to discern this film from CGI animation - if you didn’t know better beforehand. Yet there is an undeniably tactile look to the characters and environments in this film. That’s because what we’re looking at is real, physical objects. Their ability to manipulate them, transform them, and otherwise bring them to life is nothing short of magic (stay tuned through the credits for a sneak peak behind the curtain). And to do so in service of a story as moving as this one makes for a rare treat hidden in an otherwise uninspiring summer of lackluster films.


The story here involves a number of Japanese art forms, but the primary skills of the film’s title character lend themselves to storytelling in a way that reflects Laika and their process of visual storytelling. Kubo (Art Parkinson) spends the daytime hours enthralling the people of a small village with stories of a great warrior named Hanzo, who may or may not be his dead father. The stories are obviously passed down to him by his loving, protective mother, but it’s his own creativity that brings the stories to life. He tells his stories while playing traditional music on his shamisen, a Japanese instrument that translates literally as “three strings.” While he plays, sheets of paper spring to life and fold themselves into characters ready to perform the actions he describes. This parade of origami delights the gathered crowd. A perfect representation of Laika’s own method of visual storytelling, involving the manipulation of miniature figurines. But as the sun begins to set, Kubo returns to the cave where he lives with his mother.

She warns him, as we’re sure she has many times, not to stay out after dark or else her evil sisters (both played by a disturbingly creepy Rooney Mara) and Kubo’s ghostly grandfather, The Moon King (Ralph Fiennes), will come to snatch his only remaining eye. One had already been taken from him when he was a baby. His father was killed protecting him while his mother spirited him away to safety in the human realm. As you can imagine, there’s vast potential for scary images in that description. Be forewarned if you’re thinking of taking young kids to this film, there are very creepy elements in this film. The sisters are by far the worst, with their black hats, capes, and Noh masks. But Rooney Mara ratchets up the scare factor exponentially with her outstanding performance.

Nevertheless, there is a tenderness to this film. It’s established early on in the way Kubo takes care of his fading mother, who seems completely vacant during the daylight. Yet when the sun goes down, she becomes more like the mother he remembers from years ago. Her magical powers come back to her and she utilizes them to put on a show while she tells Kubo stories of the father he never knew. Yet as children do, Kubo lets his curious mind keep him from returning before sunset. As promised, his mother’s evil sisters quickly appear to chase him far from his home. But before he leaves, his mother sends some magic his way in the form of a monkey protector voiced by Charlize Theron. She’s a no nonsense type who eventually clashes with a friendly half man, half beetle (voiced by Matthew McConaughey) who Kubo befriends on this bizarre journey. Kubo knows the only way he’ll be safe is to find his father’s sword and armor: The Sword Unbreakable, The Armor Impenetrable, and The Helmet Invulnerable.

However, rather than an epic battle, Kubo and the Two Strings becomes a hero’s journey in search of something much deeper. And without spoiling anything, it succeeds. It isn’t as though there aren’t battles to be had, but there’s much more important things going on here. Family and ancestry is at the heart of this film, and Japanese art forms are utilized to bring it all to life. As such it’s a great opportunity for family bonding and cultural education. And I assure you it’s as beautifully crafted as it is touching. It’s also as engaging for adults as it is entertaining for children. What Laika has done here is some of their best work, though admittedly even if I could explain it, it simply needs to be seen.