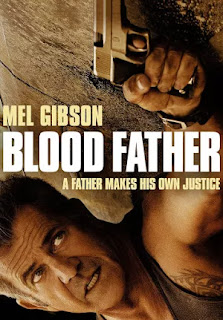 Undoubtedly we all remember Mel Gibson. He gave us some great performances in some great action films. He had grit, but could pull off comedy. He added as much to the great films he was starring in as they did to his career. Somewhere it all fell flat. Surely I don’t need to get into why. Nevertheless, the acting jobs went away. He became a successful director, but soon enough even those jobs went away. He made a few underwhelming low budget films in the early 2010s, but none were as legitimate a comeback as Blood Father. And I say that fully acknowledging the limitations of this film.

Just as Mel Gibson feels a bit like a relic of the past, Blood Father feels like a film from a different era. It’s a throwback to the sort of rugged, tough guy action films Gibson was making during his heyday. He plays a grizzled, world weary ex-con and recovering alcoholic trying to turn his life around. “You can’t be a prick all your life and then just say ‘never mind. I can’t fix everything I broke,’” he says at an alcoholics anonymous meeting. These remorseful words introduce us to John Link, yet they carry a weight coming from Gibson’s mouth they may not have coming from another actor. Nevertheless Link is an old curmudgeon disillusioned with the world and the people around him. He lost everything, including a chance at raising his daughter, because of past mistakes that held him in prison during her formative years. The journey he goes on here is one of fatherly redemption.

His estranged daughter, Lydia (Erin Moriarty), calls him in need of help after getting into some trouble with a group of drug dealers lead by her former boyfriend Jonah (Diego Luna). Of course, Link quickly finds himself in violation of his parole in order to protect her. With law enforcement and vengeful drug dealers on their tails they’re forced to stay on the move to avoid arrest or worse. From there it plays a bit like a mixture of Mad Max and Taken with Gibson playing the part of the tough father figure with a special set of skills. She’s grateful for his help, he’s grateful to have her back in his life. More importantly it presents him with an opportunity to make up for never having been there to keep her from getting in this trouble in the first place. The more he finds out about the group she’s in trouble with, the more Link relies on his own underworld connections in order to stay a step ahead of the villains. However, the price on Lydia’s head leads to enemies in unexpected places.

What gives this film depth is the father daughter relationship. And both Gibson and Moriarty turn in solid performances. They play off each other well throughout, and a number of recognizable faces appear to sink their teeth into some small but juicy roles along the way. But make no mistake this is Gibson’s time to shine, and he proves he still has it. The old beat up car he drives and the desert town he lives in leads to imagery that recalls Mad Max. But his comical, angry rants while defending his trailer from armed attackers recalls the comedic spin he put on a dramatic character in Lethal Weapon.

At under an hour and half, French director Jean-François Richet opts for a less is more approach. It involves fewer big action sequences and more plotting and character moments, and the film is better off for it. Yet he also utilizes some choppy editing and shaky camera shots now and then that feel neither deliberate nor necessary, and the film is stylistically worse for it.

Overall Blood Father is not a bad film, but it is a typical one. In fact, it does so little of interest in terms of its style and story it would be the sort of film you forgot the second you walked out of the theater if not for Mel Gibson. He makes it more watchable than it has any right to be. It reminds us that even if he lost his way, and it cost him dearly, he still has talent. He can still elevate films that would be forgettable otherwise. On a smaller scale, to a far lesser extent, and with much less fanfare, it does what Birdman did for Michael Keaton. It allows them to play broken characters that reflect their real life personas in such a way that the films would have been far lesser had it not been for their casting.