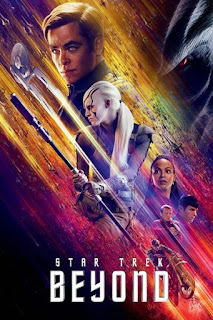 Star Trek Beyond sets aside the dark, dour tone of Into Darkness in favor of a brighter more adventuresome episode that feels more akin to the original series. Unlike the first two films, Beyond has the crew out exploring the unknown, and sending a team down to an uncharted world to meet an unknown race. And the film does so in fun, action packed and imaginative ways.


In fact for some it will be too action packed. For many, Star Trek is at its best when exploring new worlds and civilizations and utilizing science, teamwork and diplomacy to work through difficult situations full of moral quandaries. Beyond does some of that. However more often than not it skips the diplomacy, science and moral quandaries in favor of big action movie moments. Admittedly, rarely have those big action movie moments been done better in a Star Trek film. But for ardent fans of the series, it’ll be hard to ignore that the Starship Enterprise is beginning to feel more like a warship on patrol rather than explorers seeking diplomatic relations with new life and new civilizations.

Don’t get me wrong there are other things Beyond does that adds depth, and it still makes time for some great character moments. Seeing these characters interact is, as it should be, one of the highlights of the film. Beyond envisions a diverse future we can all aspire to. Three years in on this five year voyage and we’re beyond the quarrels and infighting that characterized the first J.J. Abrams Trek film. It's a sure sign of a crew that’s spent such a significant time together. In their place is a true sense of teamwork and camaraderie. It all contributes to a film whose central message is a timely one about unity. And unity is required when the team goes up against a villain whose weapons threaten destruction through very literally tearing things apart.

The action involves Kirk and the crew of the Enterprise abruptly ending their shore leave at Yorktown station when an escape pod drifts out of a nebula with the sole survivor of an attack by a violent alien race led by the evil Krall (Idris Elba). The survivor, Kalara (Lydia Wilson), asks for help from the federation to save the members of her crew that were taken hostage on a planet in the nebula. The most obvious logical lapse is the failure to question Kalara in the hopes of avoiding a trap, and as a result, wander into a trap they do. Krall’s legion of tiny warships tears apart the Enterprise in one of the most fantastical scenes in the film. The camera moves from one area of the Enterprise to another seeing a vast swarm of ships pierce their way through the hull in order to allow the invading forces to kidnap the crew.

Much of the rest of the film pairs off its central heroes and asks them to work together to reunite. Kirk (Chris Pine) and Chekov (Anton Yelchin) represent the team made up of determination and youthful exuberance. They search the remains of the ship to find a valuable weapon Krall may be looking for. Simon Pegg’s more comic relief version of Scotty and scrappy newcomer Jaylah (Sofia Boutella), a native of this strange alien world, work on finding a way off the planet. Uhura (Zoe Saldana) and Sulu (John Cho) end up the highest ranking officers among the captives. Both are forced to butt heads with Krall and his destructive ideology. But maybe the most entertaining pair is Karl Urban’s curmudgeonly Dr. ‘Bones’ McCoy and Zachary Quinto’s straight laced Commander Spock. While Bones tends to Spock’s physical wounds, Spock reveals his inner turmoil. Old Spock (Leonard Nimoy), his future self, his mentor and the only other member of his species has died, and his relationship with Uhura has gone south. Yet there’s more forces at work attempting to divide this crew. Kirk ponders accepting a position higher up in the chain of command that would take him away from the Enterprise. And Spock considers leaving Starfleet altogether in order to settle down, as if it’s his responsibility to his race. The performances are strong across the board here. A sign that these performers have settled comfortably into these roles.

Idris Elba’s Krall is at first a generic villain with generic looks, a nondescript looking crew (that nicely contrasts the diverse cast of the Enterprise), and a generic plan to push back against the Federation’s so-called peaceful expansion. However, Krall’s backstory and purposes become something far more interesting by the film’s climax. Elba is so good in his brief moments that it becomes a missed opportunity that he’s given so little to do for much of the film.

Director Justin Lin preserves the look of the series established by J.J. Abrams, but adds an even more action oriented flair to the proceedings. He’s proven capable of handling a large cast in his work on the Fast and Furious series, and he handles the cast well here. The action does however, at times, feel like it’s spiraling out of control. If it isn’t giving us shaky cam fight scenes, it’s giving us space battles with so many explosions the action can be hard follow. And then there’s a certain scene involving a certain Beastie Boys song that’s likely to leave half the crowd cheering and the other half rolling their eyes. Either way, it’s not what I would consider a strong point in the film.

Perhaps the most visually striking thing in the film is Yorktown station itself. It’s Mass Effect’s Citadel as designed by M.C. Escher. It’s a sphere whose multiple gravitational fields cause up to be down and down to be up. Few of the world’s greatest sci-fi artists could have dreamed up such a spectacular setting.

The conversation surrounding this film involved the controversial decision to make Sulu (John Cho) gay as a tribute to George Takei. Takei himself responded with support for the idea of a gay character, but wished it had been a new character rather than altering an existing one. However, Simon Pegg, who co-wrote the script, said it made sense to further diversify things in this rebooted, altered timeline in a way Gene Roddenberry himself would likely have approved. And it would have to be an existing character because otherwise it would be a token add-on character in need of establishing. Neither Takei nor Pegg are particularly wrong, but the decision will still likely upset Trek purists. No matter how you feel about the decision, it amounts to mere seconds of screentime. More importantly it gives at least one crew member personal stakes in the film’s climactic scene.

For many ardent Star Trek fans, Beyond will be too little science and diplomacy and far too much fast paced action. It’s true, this new generation of Star Trek films has taken a different approach that likely speaks to expectations of a younger generation. It’s certainly not the smartest or most groundbreaking film in the series, but not every film needs to be. Perhaps the best Next Generation film was First Contact, a film that turned into an entertaining action/thriller that tasked the Enterprise crew with battling an emotionless hive minded enemy. This film becomes another entertaining action film with a timely message about unity in the face of terrorists hoping to divide and conquer.