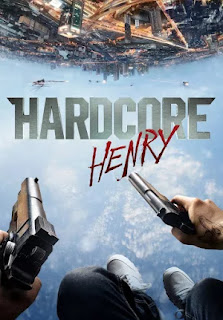 Gamers this is a film for you. It’s the proof of concept film that ports the first person gaming genre to film in a way that hasn’t been done before on the big screen. It’s a gutsy, audacious, extremely over-the-top, experimental film that is among the most fun I’ve had with a movie all year. It isn’t smart enough to sit alongside great sci-fi films, and it doesn’t have the plotting or tension building to be mentioned among great action films either. And It certainly has a few other issues worth mentioning. But I appreciate the chance that was taken here. And for those that know what they’re getting into, the result is a fun action film that is sure to thrill with reckless abandon.


Dare I say the camera work here is likely so shaky and stomach turning I wouldn’t recommend it on a big screen? But the good news is, it can be great fun on home video. Did we need to see everything from the first person perspective? No, but what a roller coaster! I’m glad to see filmmakers experimenting with the medium. Not since 1947’s Bogart/Bacall thriller “Dark Passage” have I seen a film that spends such a significant amount of time in first person. Here, like in most video games, the fact that it’s first person means we’re taking on the persona of the main character. We see through his eyes, other characters speak directly to us. And because Henry is a cyborg and his voice box is never repaired, we're clearly meant to be his voice. It’s taking the narrative approach of many novels and first person video games in which the relatively characteristicless main character serves as a vessel with which to place ourselves in the story. That in and of itself could sound like a negative, but as someone accustomed to this narrative approach, I was never bothered by it.

Henry begins the film receiving a new metal arm and leg while struggling to make sense of random flashbacks. The woman who helps him wake up and adjust to his new situation is Estelle (Haley Bennett). She explains the situation and reminds him that they’re man and wife before the mysterious villain enters to take her away and toy with Henry. He’s Akan (Danila Kozlovsky), an albino businessman with telekinetic powers that to my memory are never explained. Nevertheless he’s after Henry and Estelle for reasons unknown until late in the film. But rest assured Henry will have to battle through endless action set pieces in order to get back to Estelle and put a stop to this madman. And he does so with brutal consequences. Writer/director Ilya Naishuller dials up the fighting and gun violence against Akan’s faceless army repeatedly as if trying to one up himself with more and more graphically gruesome kills. And just when you wonder if all the killing is over, Queen's "Don't Stop Me Now" comes over the soundtrack and another massive battle sequence ensues.

Henry’s only friend is Jimmy (Sharlto Copley), an eccentric scientist who may have had a hand in helping to create Henry. Sharlto Copley quite simply steals every scene he’s in. Though admittedly that’s easier to do when he’s the only one in the scene giving a performance, but that might just be reason enough to be impressed by him. As a cyborg maker, Jimmy has built several copies of himself each having different defining characteristics. As such Copley has a rare opportunity to show off a range of personality types (not for dramatic effect of course). He plays these differing personalities and gives all of his line readings like a stage actor playing to the back of the room. It is anything but a subtle series of performances, but for a film that can’t in any way, shape, or form be described as “subtle,” it’s a very fitting performance.

Perhaps the greatest strength of "Hardcore Henry" is that it never tries to sell you on anything other than what it is. It’s a mashup of “Call of Duty” and “Robocop” with a title that begs comparison to “Mad Max.” Every scene aspires to thrill and shock in equal measure. Whether it sustains those feelings without wearing out its welcome will depend on the viewer, but it’s lengthy climactic “boss level” began to grow tiresome even for me.

The issues worth mentioning are its clear bloodlust and it’s treatment of women. In a time when the rest of the film industry is trending more towards strong female characters, “Hardcore Henry” is a “man’s man” of a film through and through. It flexes its muscles while taking pleasure in watching the blood drip from the walls. Then it waltzes through a whore house where men take advantage of scantily clad women. And of course, the main source of motivation for the title character is saving his damsel in distress. Now, I’m not opposed to the classic trope of a damsel in distress in the same way I wouldn’t be upset if the roles were reversed, but it is nevertheless a trope more and more are growing tired of in 2016. It may not have been a big deal had the women in this film not existed solely to be used and abused. But “Harcore Henry” doesn’t do anything halfway, the droves of men appearing in the film share in the suffering and often in much more gruesome ways. A “strong” character isn’t necessarily related to how much butt they kick, so much as how much depth they’re given. And depth is something kept in short supply here.

And of course it’s worth mentioning that the aforementioned bloodlust this film has may seem inappropriate given the frequency of gun related news stories popping up in 2016. This film fetishizes killing and dismemberment like few films ever have. The body count is ridiculously high by the end. For that this film has no defense, but the same can be said of many action films.

Where this film sets itself apart from most other action films is in the incredible stunt work and special effects. They’re certainly among the best I’ve seen in some time. From the parkour to the gunplay this film feels like an amalgamation of some of the most successful video games of the last 10 years. It’s fairly generic sci-fi plot also feels like it were pulled straight from a video game. And yet that’s perhaps why this film will succeed with its intended niche audience. It’s sure to achieve cult classic status with groups looking for a mindless late night action adventure.

Call if a guilty movie pleasure, but I enjoyed this film. The confusion for me is the wide disparity of responses it has received from viewers who didn't seem prepared for what this film was doing. This film was more properly advertised than a lot of other films. From the trailers you know exactly what you're getting. If the trailer turned you off, the full film won't change your mind. If you were intrigued, there's a chance you'll enjoy this wild ride. Only you know who you are. Unlike the title character, “Hardcore Henry” certainly isn't confused about what it is.