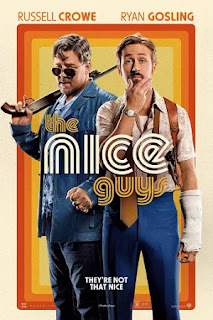 The film opens with a teenage boy sneaking a peek at the image of a nude model in a magazine just seconds before a car tears through the front of the house and out the back. The boy runs to see if the driver is alive only to find the same model he’d been ogling just seconds before laid out in almost the exact same pose. She’s naked just like in the photo, but this time she’s covered in blood. The boy takes off his pajama shirt and covers her body with it. As dreamlike and bizarre as this scene is, it’s all metaphor setting up the state of things. The porn industry is right next door, but the youth, despite their curiosity, still maintain their decency. The immorality and vulgarity of adults at odds with the decency of youth.

There’s even a line in which Holland March (Ryan Gosling) laments that his daughter has to grow up in a time when the days of gentlemen and ladies are over. His daughter Holly (Angourie Rice) witnesses a lot of vulgarity throughout this film, yet she remains the moral center of the film. Her father Holland, despite his lamenting, isn’t much better himself. He treats her well, but he’s an alcoholic. He’s also half private detective, half con-man taking money from old ladies who don’t seem to know any better. Holly tells him he’s the worst detective in the world. Perhaps that’s why he’s resorted to taking money whenever and however he can get it in order to provide for her after a house fire destroyed their home and took the life of Holly’s mother.

When writing out these details the film really doesn’t sound all that funny, but I assure you it is. Perhaps I’m digging too deep for meaning from a film that’s more fun than deep, but many of Shane Black’s films have darker edges than we might remember. “The Nice Guys” is far lighter by comparison, but it's such a competent comedy it makes other recent buddy cop films look bad. Sure they aren't really cops, but maybe they should be, they're getting the job done when no one else seems interested.

Ryan Gosling is such a great comedian in this film you’d think he’d built a career off of light hearted comedies. Who knew he could pull off slapstick comedy and Shane Black’s quick witted dialogue so well? Russell Crowe plays Jackson Healy, the straight man in this comedy team, but he gets to have his fun as well. Healy gets paid to beat people up, typically by girls who want men to leave them alone. Healy and March get tangled up in a plot involving a girl with ties to the porn industry. I won’t spoil where this twisty plot goes from here, but it’s engaging and entertaining if a little overwritten. Crowe and Gosling play off each other with strong chemistry. The action is big but not overdone. Better yet Black inserts clever gags to keep us laughing during tense and well staged action scenes. It certainly isn’t without excess, but there’s a lot of great scenes here.

It’s a throwback to a time, like it’s setting, when films were allowed to be edgy, fun and over-the-top. Action buddy cop comedies were something then they aren’t now, but “The Nice Guys” works well enough to fit nicely alongside them. Granted it rides mostly on the charm and humor of the two leads, but they pull it off so well it's easy to forgive the shortcomings.