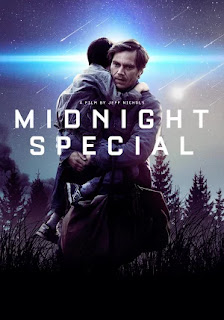 Jeff Nichols has become an interesting voice in indie filmmaking. He makes intriguing slow burn films set in the south, and fills them with down to earth people facing out of this world phenomenon. At least that’s how I’d describe his excellent 2011 film “Take Shelter,” a film his latest, “Midnight Special,” shares a fair amount in common with. Where “Take Shelter” examined his own anxiety of taking care of a family, “Midnight Special” very blatantly becomes a metaphor for the sacrifices a parent makes to raise a child that will ultimately have to leave them to find their own way. However this time around Nichols experimentation with narrative withholding leaves enough holes in the story it’ll be hard for anyone to ignore them.


It’s an exercise in minimalist filmmaking that begins well enough. In fact the opening sequence effectively builds tension and mystery the way few films have in recent memory. Roy Tomlin (Michael Shannon) watches the evening news just in time to catch a report about a kidnapping. His own face pops up on the screen as they discuss suspects and describe their vehicle. We see Alton (Jaeden Lieberher) a young boy wearing blue goggles and reading a book under a bedsheet. Lucas, their former sheriff friend and Roy’s closest confidant, hurries them to his car. As they barrel down the country roads, he turns out his lights and puts on a pair of night vision goggles. It’s a tense opening that’s handled with minimal dialogue and just enough intrigue to ensure we’ll be along for the ride.

Over the course of the film we learn Alton has some peculiar abilities, one of which involves bright light emitting from his eyes. We learn that he can utilize it to show people things. Just what these "things" are I'll leave you to discover. He also picks up on radio waves and overhears sensitive government information. The latter of which puts him in the crosshairs of both the FBI and the NSA. Eventually Roy and Lucas stop to pick up Alton's mother Sarah (Kirsten Dunst). She's a caring mother, but the truth behind the family dynamic here is never fully fleshed out. The family spends the rest of the movie on the run from FBI and NSA agents as well as a violent doomsday cult. All of them have competing beliefs as to who or what Alton is and what his intentions are. Just what these different groups' intentions for Alton are also remain a mystery. The one thing we know is his parents have to stay on the run to keep Alton safe.

What works so well here is the aforementioned family drama. The desperate parents, played with deep emotional resonance by Michael Shannon and Kirsten Dunst, effectively portraying the sort of people willing to do anything to see their child succeed even if it means leaving them behind. In fact all of the natural performances here reflect the sort of common people amidst difficult circumstances that Nichols has become known for. He grounds his characters so effectively, even the “bad guys” feel like human beings with a moral code. It’s reflective of Nichols’ rare ability to humanize everyone in his films down to the last character.

He backs up his tense drama with a moody score of piano and synthesizer that further evokes the 80’s sci-fi dramas that clearly inspired this film. It’s been compared to “Close Encounters of the Third Kind,” “E.T.,” and “Starman.” There are even some contemporary sci-fi films worth comparing to this film that I won’t name at the risk of spoiling the film’s finale. While there are some solid special effects for an indie film, their quality is inconsistent, and the end of the film suffers from budgetary constraints that kept Nichols’ unique vision from being as wondrous as it should have been.

These sorts of slow burn films that withhold their secrets, eventually building up to a big finale can be great films when done properly. "Midnight Special" is two thirds of the way there. It has all the secret withholding and moody buildup but none of the satisfying payoff that answers our questions and grants catharsis for its characters. In fact the characters, while subtly hinted at, remain at an arm's length for the duration of the film. Perhaps on a fundamental level we understand the plight of the desperate parents taking care of their child, but very little more light is shed on who these people are and how the circumstances came to be what they are.

As the mystery builds, more questions are raised surrounding Alton’s parentage and who or what Alton is, what his abilities are and why he has them, than Nichols has any intention of answering. There are also characters and entire subplots that Nichols curiously abandons partway through the film. Sam Shepard plays the adoptive father to Alton, and enigmatic leader of a doomsday cult that believes Alton to be some sort of messiah. Though once he sends a henchmen after the boy, and answers questions asked by NSA agent Paul Sevier (Adam Driver), he disappears never to be heard from again. There are hints at depth for these characters, but after introductions that lead us to believe they have important roles to play, they’re relegated to the sidelines if not dropped altogether.

The ultimate enjoyment of this film will depend on how much you’re willing to forgive its shortcomings and infer its absent story elements. There are plenty of things “Midnight Special” does well and it certainly isn’t lacking interesting yet familiar ideas, but far too often it fails to execute them in satisfying ways.