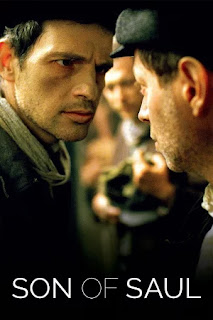 “Son of Saul” made the festival rounds last year to stellar reviews and strong word of mouth. It’s hard to watch, but for all the right reasons. It’s a tale of humanity surrounded by inhumanity. It shows the harrowing experience of being in a concentration camp entirely from the perspective of a Hungarian prisoner and member of the Sonderkommando—prisoners forced to work for the Nazis while they exterminated Jews at concentration camps in exchange for a delay in their own execution.

As he cleans up after the latest killings, he finds a young boy has survived only to be promptly murdered by the Nazis soon after. As if to restore some of his humanity he takes it upon himself to hide the body so it won’t be dissected, in the hopes that he can find a rabbi and give the body a proper burial. He treats the dead boy as if it were his own son, and even claims him as his son to those around him that know better. Yet the precarious position he’s in makes it hard to find a rabbi and sneak a body out of the camp. Worse yet, his plan comes at a time when he is needed to help coordinate an escape with his fellow prisoners as their time runs short.

Few films grant such a deeply affecting look at the despair of life in a concentration camp. It’s a tough subject, but it’s handled with care. The opening shot is out of focus until Saul walks into view. From that point on the majority of the film remains affixed to the face of Saul as he witnesses all the terrible things that happen. Yet Géza Röhrig plays him with subtlety. His weathered face remains mostly devoid of emotion. It shows a man both pained by his experience yet tragically desensitized to the atrocities he’s witnessed. Nevertheless this is a remarkably emotional tale, and Röhrig carries it on his shoulders. Though he isn't the only one whose performance is half in the way he looks. Saul pleads with a doctor not to cut the dead boy's body. The doctor (Sándor Zsótér) tells him he has no choice, that he's just as much a prisoner as Saul is. His face is pale and slightly gaunt, his eyes dark. It's clear he takes no pleasure in what he's tasked with, and it's led to many sleepless nights.

Death is a common occurrence and everyone here knows it can come for them at anytime, yet Saul seems to have already lost all of his loved ones, only acquaintances remain. And everyone seems to have accepted that these acquaintances won’t last long. It’s clear that part of what weighs so heavily on his mind is that he took part in the evil deeds, effectively trading his humanity for a few more months to live. That’s likely why he feels such an overwhelming need to find that last shred of human decency before his likely demise. As if this one simple act can redeem the ones forced to commit atrocities and those who had them committed against them.

Though things in the background remain mostly out of focus, we get a sense of what’s going on and that’s enough. Director László Nemes wisely spares us many of the gruesome details. He sticks to the principle that served Spielberg so well in “Jaws,” rather than allowing what terrifies us to linger on screen, he suggests it and lets it unsettle us. We hear gunshots, screams, dogs barking, people banging on metal doors pleading to be let out of gas chambers, and that’s just what’s happening off screen. Later we see the aftermath in the blurry background as naked bodies are dragged by their lifeless limbs and piled on top of other bodies waiting to be burned. Nemes shoots many of his scenes in long unbroken takes which makes the amount of detail he is willing to give us and the performance by Röhrig all the more impressive. The claustrophobic framing of these events, seen from just behind Saul, contributes to what is already a claustrophobic tale. For a debut film, this is remarkably well crafted, and stunningly confident filmmaking. He achieves surprising depth despite his simplistic approach. "Son of Saul" will linger in your memory long after it's over. Its director will be one to keep an eye on in the near future.