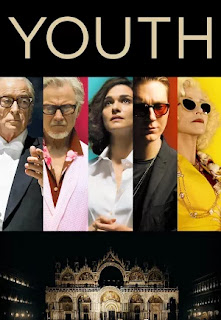 One of the forgotten films that got a limited release towards the end of last year is Paolo Sorrentino's "Youth," a follow up to his critically acclaimed 2013 Oscar winning film "The Great Beauty."

It follows two friends aging toward the end of their life spending time together while reflecting on their careers and trying to enjoy a relaxing vacation in the Swiss Alps. Michael Caine's Fred Ballinger is a retired composer whose known for his "Simple Songs" which he composed and his wife sung (though she's in a care home and can't sing anymore). Throughout the film he resists an emissary from the Queen of England who pressures him to come out of retirement to perform his "Simple Songs" one last time for the Queen. Meanwhile his good friend Mick Boyle (Harvey Keitel) works with a handful of young screenwriters to develop a script for what is likely his final film. He also hopes to lure his old friend and muse, Brenda Morel (Jane Fonda), to be in the film, even though she's trying to make her final project an upcoming television series.

When they aren't working (or purposely avoiding work) Ballinger and Boyle are failing to relax at their Swiss Alps resort. Ballinger's daughter Lena (Rachel Weisz) accompanied him and set him up with a strict schedule of relaxation, massages and regular checkups with doctors in the hopes of making him healthy. Instead she keeps him apprised of the pain going on in her own life as she deals with a sudden divorce. Her husband Julian (Ed Stoppard). Boyle's son, decided to inform her of his infidelity just before leaving to catch a flight. And Boyle struggles with his team of writers to put the finishing touches on their script.

Also present is actor Jimmy Tree (Paul Dano) who has found himself at a loss for creative inspiration while preparing himself for his next film role. He continues to be frustrated by fan recognition of his lesser work. He considers himself a serious actor, but he's become known for his part as a robot in a big budget summer blockbuster. It is his everlasting shame that he has become known only for his brief delving into what he considers levity.

All of this leads to a lack of relaxation while at a place made to help people do just that. At this getaway there are many shots of people trying to relax, but there is something on their face that indicates an inability to do so. Life never seems to allow true relaxation because our minds never quit. Even in this serene place, accentuated by lovely architecture and stunning vistas, the people seem plagued by unending unhappiness. It's captured in the form of an elderly couple who sit together silently at dinner every night. Ballinger and Boyle have a little game in which they bet each other on whether or not they’ll leave without saying a single word to each other. One night at dinner she angrily slaps him and walks out. The next day Ballinger and Boyle happen upon them in the woods loudly expressing their physical emotions toward one another, as if sex is the only way to solve the problems of such passionate beings.

Yet a later conversation between Ballinger and his masseuse clarifies this scene. She tells Ballinger that she can tell it isn’t stress that bothers him, it's his emotions. They conclude that you can tell a lot about a person’s state of being by touch. It makes them wonder why people are so afraid of touching. Ballinger suggests that perhaps it has something to do with pleasure. To which the young masseuse wise beyond her years replies, “That’s just another good reason for touching rather than talking.” Different people have different means of communication, and sometimes a simple touch says enough.

"Youth" offers such reflections and more. Even to the point of getting lost in it's attempts to talk generally about life and careers. In fact a few scenes feel somewhat out of place, even if they're in context to the rest of the film. For instance there's a scene in which Boyle asks his writers to peer through a pair of binoculars. They gaze at a distant mountain and see that the binoculars make it appear close. But then he turns them around and has the writers peer through the other side. He explains that when you're young the future seems so close, but when you get old the past seems so far away. It's an easily identifiable metaphor that feels in keeping with the film's reflection on life itself, even if it doesn't necessarily flow or connect with the scenes that come before and after it.

Then there are other more dreamlike scenes in which Ballinger sits down to observe a field of cows. A musician can never stop hearing the music. As such he begins conducting a piece of music played by cowbells and bird chirps. This is just an example of the endearing piece of artistry that makes "Youth" worth every minute of its fairly lengthy runtime.

As often as it felt like it was losing its way, it impressed with yet another piece of wisdom that was easy to identify with, and usually did so with a beautiful piece of imagery to go along with it. Even when it starts to venture to places that feel completely out of nowhere, I was able to appreciate the content. It’s a poignant, beautiful reflection on life. Even if it’s a bit all over the place, and occasionally a bit pretentious, it's still profound and thematically layered nonetheless. Film can be both at the same time, and do just enough right to be reviewed favorably. That’s the case here. It’s a moving reflection on life that may not be appreciated in full for years to come. "Anomalisa" may have been advertised as the most human film of the year last year, but I’d place it second behind this film.