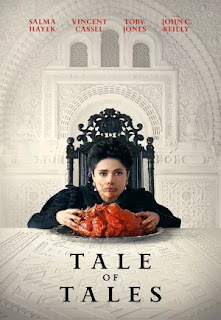 Lately I’ve been spending my free time trying to catch up on beloved fantasy adventures from the 80’s and 90’s that I missed out on when I was younger, as well as revisiting a few favorites. As a fan of the genre these films take me back, and even when they’re not particularly great movies, they’re enjoyable films that I have a soft spot for nonetheless. It would seem like fate that “Gomorrah” director Matteo Garrone’s English language debut, “Tale of Tales,” should get a release during this time. From the outset it would seem like a perfect movie to see given my current state of nostalgia. It’s something of a fantasy adventure, but a more adult one that isn’t likely to feature the campiness of the film’s I’ve been watching lately. It involves three fairy tales adapted from 17th-Century writer Giambattista Basile who is known as the father of the fairy tale.

Yet as we know from the Brothers Grimm (who were influenced by Basile), many old fairy tales were dark and filled with elements we can only categorize as that of the horror genre. As such, it should be no surprise that “Tale of Tales” has more in common with Guillermo Del Toro’s “Pan’s Labyrinth” than it does any of Disney’s family friendly fairy tales. Here there are ogres, sea monsters, sex, a woman eating a bloody animal’s heart, and other such things that would cause children nightmares.

There is, however, an ornate beauty to the costumes and set design here. The credits thank a large number of people who worked on the film’s convincing makeup and made practical sets and other effects for the film, including puppeteers who no doubt are responsible for several of the film’s monstrous creatures. However, unlike “Pan’s Labyrinth” this film’s lackluster stories fail to become an engaging series of events that come together in any compelling way. In fact, the film never creates a compelling reason to exist at all.

The first of the three stories involves the King (John C. Reilly) and Queen (Selma Hayek) of Longtrellis’ desperation for a child. A mysterious traveller tells them the Queen will become pregnant if she eats the heart of a sea monster after it’s been cooked by a virgin servant girl. What the traveler failed to explain was that the virgin might just become pregnant as well. Years later the children grow up to look like twins and feel like brothers. They despise the fact that the Queen refuses to let them be friends simply because royalty isn’t suppose to mix with peasants.

The second story involves the sex crazed King of Strongcliff (Vincent Cassel), who falls head over heels for a woman he hears singing off in the distance. Her voice is soft and sweet, but little does he know she has the appearance of an old wrinkly woman. His unwanted affections frighten the woman and her sister because they don’t know whether to stay in his good graces or anger him by admitting the truth about their appearance. Things become more complicated when her appearance is inexplicably changed to that of a beautiful young woman, and her old haggard sister is left wishing she too were young and beautiful.

The third and final story involves the King of Highhills (Toby Jones) who keeps a pet flea that he feeds until it becomes as large as a small cow. When it eventually dies he uses its hide for a guessing game. He’s obligated to marry his daughter off to someone who can complete a challenge he sets forth. Thinking no one could guess that the enormous hide would belong to a flea, he makes that his challenge. No man is able to guess until a giant ogre comes along and guesses correctly. Good to his word, the King gives his daughter over to the ogre. She is, of course, angry and upset and spends her time frantically plotting her escape.

Now if these three stories sound like incomplete little pieces of fantasy, they are, even their conclusions don’t add much to them. None of these stories would be complete by themselves, nor do they add up to anything once they’ve been intercut together. Garrone navigates back and forth between these stories in a willy nilly sort of way that feels completely arbitrary. None of the stories connect in any way, which doesn’t allow for any of them to intersect or inform one another. And when all the various character do end up in the same space toward the end it does so for untold and arbitrary reasons. None of these stories build to any sort of climax and when they reach their half-hearted end they do so without rhyme, reason or resolution.

While the visuals are the film’s sole strength, it lacks the fun adventurous spirit of the classic fantasy films that likely served as inspiration. Without that sense of fun and adventure, there's nothing left to make the flaws forgivable. It also lacks the compelling drama of a dark fantasy film like “Pan’s Labyrinth.” About the only lesson to be learned here is that even mystical miracles demand sacrifice. Yet sadly that lesson isn’t overarching in a way that permeates all three of the stories being told. The rest of the stories are devoid of purpose and resolute character arcs. This film is so utterly empty that I might just have to go back to my marathon of classic fantasy adventure films just to put this one out of mind.