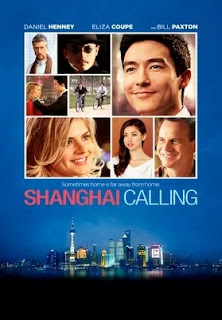 As someone who is engaged to someone from Hong Kong and had a Taiwanese roommate in college, I learned an appreciation for Asian cultures. Once you spend time around a group of foreigners and, better yet spend some time traveling in a foreign country yourself, you quickly learn a lot of things, like how big the world is and how small you and everything in your little bubble is. It’s an eye opening experience for most. But if you can get over the culture shock you just might find a big fascinating new world that makes it hard to return to your own little place in it.

I’m sure that was the pitch for “Shanghai Calling,” or at least something to that effect. And for the most part this indie film, and directorial debut for Daniel Hsia (he wrote the screenplay as well), spends its time illustrating and analyzing the humorous situations a foreigner finds themselves in when adjusting to a new country. In fact the film is, by far, at its best when its doing exactly that. However, it tries to use those ideas to accentuate a bloated story with too many characters and too many subplots. It also runs into some problematic “first time director” woes and includes a few of mainstream Chinese filmmaking’s more tired tropes that keep this film from gaining the kind of ground I wish it would have.

It begins with main character Sam (Daniel Henney), an ambitious New York attorney being informed by his bosses of his relocation to their new Shanghai branch. Once he’s there he’s introduced to Amanda (Eliza Coupe), a relocation specialist there to help make the transition as easy as possible. The irony here being that she's caucasian and speaks Mandarin while he's Asian American and only speaks English. One scene recognizes the irony by having them go to a restaurant where the waitress only speaks to Sam assuming he'll understand her simply because he looks Asian and Amanda won't because she's caucasian, even if she's the one making all the responses.

She’s a single mom and her business is struggling for clients so she sticks to Sam as if her career depended on it. Meanwhile Sam, once he gets settled in (if he ever really does), works with an American client, Marcus Groff (Alan Ruck), to secure the ownership and production rights to a revolutionary type of cellphone.

However a day after signing the deal, a Chinese small businessman begins production on the very same design claiming to have inked a deal with the phone’s designer as well. If Sam fails to halt production on the device and force a cease and desist, giving Groff sole rights to the design, he will be fired for costing his firm a very lucrative opportunity.

On top of all of this is Sam’s relationships with two employees at his firm in Shanghai. Fang Fang (Zhu Zhu), Sam’s assistant, falls very suddenly for his good looks, even if his charm is severely lacking. And Guang (Lu Cai) has fallen in love with Fang Fang, despite her interest in Sam.

Sam begins the film as a go-getter out of his element. Hsia’s script can’t seem to decide whether it should spend its time making him likable enough to string us along, or let him be a jerk so that he can be redeemed in the final act. So Sam (Daniel Henney) ends up trying for both and succeeds in neither. It's hard to make an audience sympathize with a character going through culture shock and work problems while establishing him as an unlikable jerk in need of redeeming. Daniel Henney lacks the charisma and screen presence to pull of such competing characteristics. Yet that’s something that’s reflected in the rest of the film as well.

Hsia clearly had some decent ideas for numerous different kinds of people struggling to get by in this group of American expats and the people working around them, but his inclusion of so many of them resulted in a scattershot story that lacks enough focus to properly flesh out any of its many character arcs. I haven’t even mentioned that Bill Paxton is in this movie, but he and a few other side characters amount to recurring cameos that go nowhere and contribute nothing to the overall film.

It also stumbles due to its tendency to try for interesting twists when the film clearly would have been better off realizing the harsh reality of the situations. By about the time you’ve given up on Hsia to do the right thing by his characters, he tries for a twist that brings them back into our good graces. By the time I was wondering why we were spending so much time with Fang Fang, Hsia makes Sam rudely push her away only to eventually force him to reconcile with her, though not by choice (he’s forced into it by contrived circumstance). Often the film seems to be trying to make Sam an unappealing jerk then cuts to one of his “romance scenes” with Amanda, and the two alternating tones don’t mix well.

In this movie we have a man’s struggle (and a few other’s struggles) to adjust to life in another country, and a poorly established romance, and a separate workplace romance, and a workplace drama, and a theme about big business taking advantage of smaller businessmen, and a few side characters whose dramas aren’t even worth describing. It seems to be following a trend I’ve noticed in mainstream Asian films in which the writers throw everything at the wall hoping at least one plotline resonates with the audience, even if it means the central narrative suffers. And the way they try to bring it all together toward the end is in heavy handed montages full of flashbacks to what’s taken place earlier on in the film just in case we forgot. And of course it does all of this while villainizing westerners, but to be fair, they're western businessmen who have a tendency to villainize themselves.

But maybe the worst part of all is its insistence on light-hearted comedy and its cornball happy ending in which everyone is all smiles at a group party where nothing could possibly go wrong. There are moments in this film where, in the hands of a better filmmaker, the story would have stuck to reality. The potential for two parallel stories (one of romance and one of Sam’s work) could have shown that in life one person’s victories result in another person’s defeat. Sam has to turn down the girl he doesn’t like while pursuing the one he does, and he’s forced to tear down a small business in order to keep his job and find success at it. But rather than reflecting the harshness of those realities, the film doubles back on those plot lines to bring everything back to a neat and tidy, picture perfect ending. And because of all the doubling back it does, it very quickly starts to feel long in the tooth.

One of the more humorous scenes involves a meeting between Sam and a man known as "Awesome Wang" (Geng Le). They meet at a small restaurant and while Wang eats, Sam is surprised to see every empty seat at their table filled by strangers. Sam wonders if they could go to a place more private, but Wang assures him no one understands English (see trailer above). I've been to a restaurant similar to this. It's something you'd likely never find in an American restaurant, but there are so many people to serve and only so much space to seat them. About the only thing this scene gets wrong is the noise level. It's peculiarly quiet, while most restaurants like this would be filled with loud conversation.


I was interested in this film because it promised culture clash that’s easy to identify with and rarely portrayed on film. For the most part Hsia appropriately portrays a bit of the culture shock you could expect while spending time in another country surrounded by a people and language you don’t understand. For that I give this film a star more than it probably deserves. Sadly the film’s ambition didn’t expand much beyond that basic premise. Like the mainstream mobile tech this film’s workplace drama involves, “Shanghai Calling” has a mass produced feel to it that lacks heart, soul and an artistic voice. While that cellphone was said to be revolutionary and made for mass market appeal, this film ends up lacking both of those qualities.