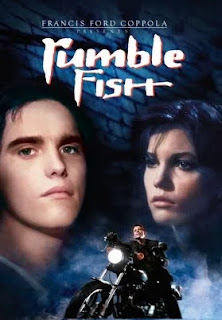 Rumble Fish is Francis Ford Coppola’s somewhat experimental film about youth and two brothers moving in opposite directions in terms of their affinity for gang violence. This type of story has been done at least a few times off the top of my head, but two of the more well known are Scorsese’s “Mean Streets” and Wong Kar Wai’s “As Tears Go By.”

All of these stories involve an older gang member looking after a reckless younger one, with the older one aspiring to get away from the violence only to be pulled back into it to look after the younger one when he oversteps his bounds. Where this film differs is that the two gang members are literal brothers rather friends as close as brothers. And rather than big time gangs of New York or Hong Kong, this is teenagers pretending to be gangsters in a smaller town.

The film begins by following Rusty James (Matt Dillon) and his small time gang of teens that include now famous faces like Nicolas Cage, Laurence Fishburne, and Chris Penn. His best friend is likely Steve (Vincent Spano), the class nerd who looks at least a couple of years younger than the rest of them. He bites his nails, can’t hold a person’s gaze while talking, and has a tendency to try to document everything he sees on a small notepad. Yet as interesting, and seemingly important as Rusty James and Steve’s relationship seems in the early scenes, he dissolves into the background becoming just another one of the film's inconsequential characters (along with the rest of the gang members).

Everyone seems to repeat his name, Rusty James, as if it’s so well known around the community that it’s become accepted that if you’re going to say it you have to say the whole thing. Never just Rusty, and never just James. And if you are referring to him, you can’t use pronouns you have to say the name Rusty James. Yet not too much longer into the film we realize that the name recognition and position as leader of their small time gang has more to do with who he’s related to rather than anything he’s accomplished for himself. It’s an odd quirk about the script that seems to contradict itself at first. He needs to establish a name for himself, but everyone already knows his name. Yet that ends up being a different problem altogether.

It’s reflected in the later scenes in which Rusty James’ older brother, known only as Motorcycle Boy (Mickey Rourke), obsesses over brightly colored fish, he calls “rumble fish.” They wouldn’t fight if they were free rather than held captive in cages. It’s a clear representation for the trappings of the small town filled with violence he can’t seem to escape. 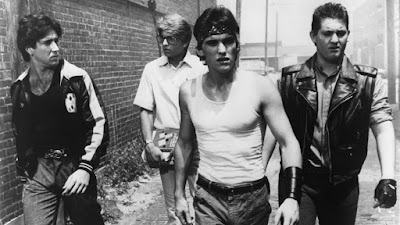 Rusty James is the reckless young one with aspirations to become a big time gang leader, even if he isn’t quite sure how to go about accomplishing that short sighted goal. He leads his friends to a dark alley where he intends to fight the leader of another small time gang. Coppola experiments with his artistry in these early scenes. His unique visual flair turns this nighttime fight sequence into something wildly captivating. It’s full of canted angles, low shots, and fast paced camera moves. But even when he’s not looking for a fresh way of shooting a teenage fist fight, Coppola utilizes a Hitchcockian (or is it Orson Wellesian?) technique of deep focus to keep characters in the foreground and background in focus throughout an entire scene. It lends a bit of visual flair even to the less exciting scenes of characters brooding.

Matt Dillon seems to be doing his best Rocky impression, however where his exaggerated tough guy drawl is easier to understand than Stallone’s mumble, Rocky had strength of character that Rusty James lacks. Rocky was down on his luck but aspired to be something more. Rusty James has no one to blame but himself and his lowlife family for his place in life. Where Rocky was charming, despite his lacking education, and loyal to the girl he loved, Rusty James was neither educated nor loyal to anyone but his brother. Despite their similarities, they represent opposites in terms of ambition.

Rusty James even dresses like a kid trying to pretend to be an action movie hero. He spends the majority of the film trying to be someone he isn’t. He cheats on his girlfriend Patty (Diane Lane) and lies about it, then can’t understand why she would leave him. And even his own gang members have to break it to him that he’s not smart enough to be a gang leader. His only ambition is to grow up to be as cool as he perceives his older brother to be. Though rather than having the ambition to step out from under his brother’s shadow to make a real name for himself, he seems to want to become exactly the man casting the shadow in the first place. 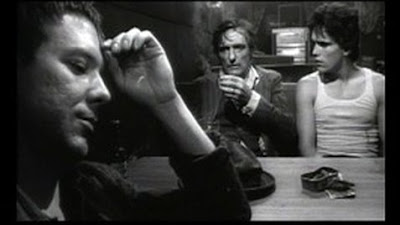 Mickey Rourke plays the older brother as a young adult weary of the same old teen tough guy stuff his brother can’t let go. As often as he’s drawn back into violence on behalf of his troublemaking brother, he sits and regards life as someone completely disinterested in the politics of this small community. There’s very clearly a deeper more disturbed side to the character that remains sadly underdeveloped by the film’s end.

When you’re a kid you’ve got nothing but time, you don’t mind throwing away a couple years here and maybe a few there, but when you get older you realize how little time you have left and how badly you wasted your precious youth. This theme of time slipping by is represented visually in numerous shots of clocks and clouds passing by. Motorcycle Boy seems to realize that he wasted his youth on petty gang violence and now wants no part of it. He represents a likely future for Rusty James, unless Motorcycle Boy can free him of his ties to the town and his short sighted aspirations.

Rumble Fish was not well received initially, though it has since been generally accepted as a brave piece of artistry. There is merit to the complaints that it’s a bit of style over substance. There’s a good portion of this film where it feels like nothing happens, and once it’s lost most of its steam a few bigger plot points come out of nowhere and leave it with nowhere else to go. It also ends on a somewhat ambiguous note that diverges from the novel source material. So the complaints are perfectly valid. Yet there’s something about the way this film moves, something about the way the cinematography and performances elevate the lackluster story that simply can’t be denied. This was a side project for Coppola, but him being a master filmmaker, even side projects can be well crafted pieces of art.