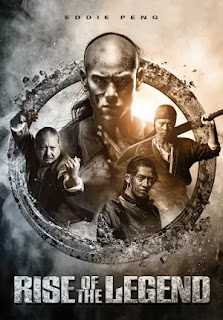 While superheroes have taken over the box office, there’s still space for traditional folk hero tales. At least that was the hope for “Rise of the Legend,” another in a long line of film adaptations of the doctor/martial artist/folk hero Wong Fei Hung. Over a hundred films and television series have been devoted to his heroic exploits, and he’s been portrayed on screen by big names such as Jet Li and Jackie Chan. This latest portrayal sees chiseled young martial artist Eddie Peng take over the role, and asks him to square off against legendary Hong Kong martial arts choreographer and filmmaker Sammo Hung (who briefly played the part of Wong Fei Hung himself in 2004’s “Around the World in 80 Days”).

“Rise” begins with a brutal fight sequence in a cramped and rainy back alley. Punches are thrown and blood spurts in slow motion. Men with swords surround Wong Fei Hung, whose all white clothing indicates his purity. Just as the tide of the battle turns against him, the story flashes back to his childhood. As has become a fairly typical superhero origin story, his father died when he was just a child, and he grew up with vengeance against evil gang leaders on his mind. Yet It’s also a story of a group of rebels rising up against the established order, it just so happens that the established order is a violent gang of oppressors.

They’re the Black Tiger Gang led by the infamous Master Lui (Sammo Hung). They’ve been in a turf war over a lucrative port with the North Sea Gang. For a while the film starts resembling a Wuxia version of “The Departed” (or “Infernal Affairs” for you purists) if the story only involved one insider rather than two on opposing sides. However the film spends little of its time establishing Master Lui in the way “The Departed” does its crime lord. Rather “Rise” spends more of its time moving at breakneck pace from one action sequence to the next. It makes time for scheming to take down Master Lui and flashbacks that establish Wong Fei Hung and his friends, but it fails to devote similar attention to establishing the threat they’re up against.

Young Wong Fei Hung is shown to have faithfully followed his doctor father as he took care of the sick and needy. Yet the violent turf they live on leads to his father’s death. It adds incentive for Hung to fight against the Black Tiger Gang, even if the poor living conditions and treatment of the repressed people living in the area aren’t enough. However, for an origin story of sorts, the film spends relatively little time in this developmental portion of the story. Separate flashbacks show him at older ages receiving training and becoming friends with those who would be his allies against Master Lui. These flashbacks are intercut with Hung and at least one of his childhood friends working in undercover roles of sorts, while his other friends lead the dock workers in an uprising. Yet director Roy Chow Hin Yeung and screenwriter Christine To seem to get lost in their attempts to cleverly sparse the details and flashbacks throughout the story. In fact, at least a couple of important flashbacks that setup the friendship between Wong Fei Hung and his childhood buddy Fiery (Jing Boran) come too late in the film, after a significant plot point that would have hit with more impact had the flashbacks come earlier in the film.

The aesthetic here is very clearly inspired by Guy Ritchie’s “Sherlock Holmes” films. Most notable are the cinematography, color temperature, slow motion shots and character introductions done in freeze frame as an off-white piece of paper draws the character’s face and scrawls their name in ink that seems to be dripping from the page. Yet even the film’s soundtrack is a lethargic impression of Hans Zimmer’s quirky, energetic banjo plucking and broken piano playing from the “Holmes” films.

Yet this leads me to one of the film's most noticeable problems. It has a tendency to channel films we've seen before, which leads to a general lack of dramatic tension due to too few narrative surprises. However it does have more than a few spectacular visuals to spice things up. One of the best is an early unbroken shot that flies in from the clouds, down past boats on the seas, to the streets of the pier surveying the hellish conditions for the dockworkers living and working in the area. The contrast between the living conditions of the well off versus the people living in poverty is made very clear in these early scenes and serves to further the rebels cause.

Yet the draw here, like any other martial arts film, are the fight sequences. They're impressive and inventive fight sequences that often feel experimental in their techniques. Many of them are over the top, as is expected in a martial arts film, but often the methods used to capture them are as fascinating as the brutal gut punches that comprise them. Even if some of the techniques here mimic those seen in other martial arts films (including one slow motion 360 spin taken straight from "The Matrix") the action is some of the best choreographed action I’ve seen since "The Raid 2."

It's highly likely we'll see more from Wong Fei Hung, even if not necessarily a sequel to this film. He's a folk hero that we've certainly not seen the last of. We also haven't seen the last of rising star Eddie Peng. He certainly has the martial arts prowess, but he's capable of lending his charm and dramatic talents to the role as well. We can only hope that if he chooses to continue starring in this role that future films will feature stronger, more original writing. Nevertheless "Rise of the Legend" is an entertaining spectacle that should hold the attention of most martial arts movie fans.