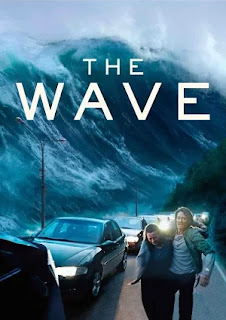 Disaster films are, by this point, a dime a dozen, and if last year’s “San Andreas” was any indication, making a unique, compelling film that doesn’t feel like a collection of cliches is hard. The latest big budget film from Norway tries its hand at the genre and while it's a much better film than "San Andreas" it runs into a lot of the same problems.

Director Roar Uthaug, a long time fan of the genre, cited films such as "Twister" and "Armageddon" as inspiration for "The Wave." Norway is a country all too familiar with rockslides. In 1905 a rockslide induced tsunami took the lives of 60 unsuspecting people. In 1934 a similar event took the lives of 40 people, and another event killed 74 people just 31 years later. This film is both based on these events and foreshadowing of a future event experts expect at any time.

This film is curiously both a big budget film that serves as the pride of Norway's film industry (it was their submission for the Academy Awards, but it wasn't nominated), and an advertisement to beware traveling to Norway's tourist destinations. The film takes place in Geiranger, a small idyllic tourist town in the mountains of Norway. It's almost ironic that after a brief, foreboding documentary style introduction that reminds of the previous rockslide tsunami events that have occurred, the film opens with an extended fly-through of this beautiful location as it follows main character Kristian (Kristoffer Joner) on his drive into town. It's a wash of color from the beautifully green mountainsides to the deep blue waters of the fjord.

Kristian is a geologist working at an early warning center. On his last day he notices something that looks suspicious, but his team assures him it’s nothing to worry about. He, of course, isn’t so sure. The groundwater had disappeared rather suddenly, an early indication that the plates are shifting and a rockslide is imminent. While much of the early portion of the film sets up Kristian as a loving father in a happy marriage to his wife Idun (Ane Dahl Torp), his concerns about the potential for disaster eventually causes him to neglect his fatherly duties. This, of course, causes some minor strife between the parents, and of course they end up in different parts of the town just before the inevitable disaster.

While Kristian is clear to leave with the kids, Idun has one last overnight shift at the hotel she works at before she can leave. However, Kristian reluctantly stays in town to check over some more data while trying to convince his now former coworkers of the possibility of a disaster, but he's unanimously defeated by their reluctance to cry wolf. Yet despite his concerns he happily stays in town with his young daughter who wants to spend one last night in their family home before leaving it for good. Meanwhile his teenage son wants to stay in the hotel his mother works at for the night if only to gawk at the cute young receptionist, which turns out to be a minor subplot that goes nowhere.

Easily the most involving scene in the film is the big moment. Over half of the film's budget went into creating the special effects of the wave hitting the town as the people flee for their lives, and it paid off. As brief as it is, the effects here hold up alongside any expensive Hollywood film. There’s an emphasis on how fast these things hit and with little warning. As such, the scene in which the wave does its damage is fairly brief, but it’s lead up and eventual destructive moment is tense enough to be called edge of your seat entertainment. What follows, for the most part however, is the stuff of disaster movie cliches.

However, to its credit, it does dabble in aspects of humanity in dire situations that most disaster films don’t. Take for instance the distraught man who's just witnessed his wife’s death, and is now forced into a tough survival situation with people he neither knows nor trusts. He’s likely to make some questionable decisions that could negatively affect those around him, and the others may be forced to make a tough decision about his continued survival in order to preserve their own. These are the tough scenarios that ring true to my cynical mind when considering humanity in the face of survival situations, and not enough of these films are daring enough to go down that road. While “The Wave” wins points for this, it stumbles in enough other situations to keep it from being a truly compelling disaster film. It sticks to the standard disaster movie formula and includes enough cliches that even the strong performances and solid special effects can’t save it.

The central family is moving away, but can’t get out before the inevitable event. Of course, some of that is due to the geologist who can’t seem to tear himself away from his work. It results in a tired trope of disaster movies in which the main character is so concerned about the potential disaster he fails to take proper care of his family. He’s then required to spend the rest of the film making up for it during and after the disastrous event. Many lives might have been saved if only everyone else had believed the geologist’s fears. He sees the disaster coming, but can’t convince anyone to take the proper precautions till it’s too late. And of course, an underwater sequences leads to a person who needs to be revived after taking in too much water, and Uthaug draws this scene out for all the expected dramatic effect possible.

Still, this film is effective enough at building tension, and delivers enough thrills, that for some it may be enough to forgive its short comings. The real alluring thing about this film is that it could very well happen, and perhaps sooner than we think. It's already happened several times throughout Norwegian history, and experts expect it to happen again, but can't be sure when. The buildup may draw out a tad long, and the resolution may as well, but the event itself is among the best the genre has seen in some time. Uthaug is set to direct the next "Tomb Raider" film, and if the direction and special effects work from this film are any indication, it should be in good hands. Let's just hope the writing involves a few less cliches.