The Month of April (and May) at a Glance:


The next film on the release schedule for Netflix looks like it has potential. Could be quite entertaining. April is shaping up to be quite a month. I just got caught up with the show "Vikings" so I can start watching the latest season (still in progress and running through April). "Special Correspondents" is getting a Netflix release on April 29th, and of course "Game of Thrones" and "Silicon Valley" are returning to HBO for another season. 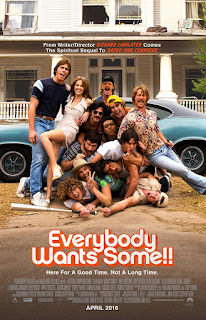 Then in the land of theatrical releases there is Richard Linklater's latest "Everybody Wants Some" hitting on April 1st, and Jon Favreau's "Jungle Book" movie (which I'm not sure what to think about). And of course April will lead into May, which kicks off the summer movie season with a bang that includes "Captain America: Civil War," and "X-Men: Apocalypse," but also includes less surefire fare like the "Angry Birds" movie and a return to Tim Burton's curious wonderland with "Alice Through the Looking Glass" (this time directed by James Bobin). However, more exciting than those last two films is Greek director Yorgos Lanthimos' English language debut "The Lobster." It made the film festival rounds last year to fairly unanimous critical acclaim.

And then there's "Kiss Kiss Bang Bang" and "Iron Man 3" director Shane Black's crime, mystery, comedy "The Nice Guys" that looks genuinely funny. And if we're looking a bit further out (as in there is no confirmed release date), HBO is adding what looks to be another great TV show to the mix with "Westworld." I may have to try to find the time to catch up with the 1973 film version of "Westworld" before this show begins.

Exciting times to say the least.