Ubisoft's latest Tom Clancy title is out and has sold well. I had written briefly about my impressions during the beta back at the end of January, but now that the full game is out here's a brief initial impression of the full release.

The visuals in this game are still quite strong. There's a startling amount of detail both in character models and environments. This is a game that feels truly next gen, and I am glad it exists because it combines two genres I enjoy. It's a rare combination of tactical 3rd person shooter with an online only loot based RPG.

It takes place during winter (there is no season cycle, though there is a day night cycle), and the snowy apocalyptic New York makes me feel cold just looking at it. Good thing you can pick up various pieces of apparel, like a soft, all weather parka (among many others) to keep yourself warm. Pants, shoes and hats can be found or earned for your troubles along the way as well. While there are a good number of these items to be found, they are only cosmetic. They affect none of your character's stats. Unfortunately, they're also about all the customization the game has to offer in terms of the look of your character. Initial character setup allows you to choose a generic face from a few different ethnicities and you can pick from a few different hair styles, but beyond that the game is very lacking in terms of the character creation and customization.

The controls, once you get into the game, are fluid and responsive. If you've ever played a Tom Clancy's Ghost Recon game, or any third person cover based shooter for the matter, you'll feel right at home with movement and shooting. Things get a tad more complicated once you start using pieces of gear and abilities, but it's nothing terribly difficult to grasp. 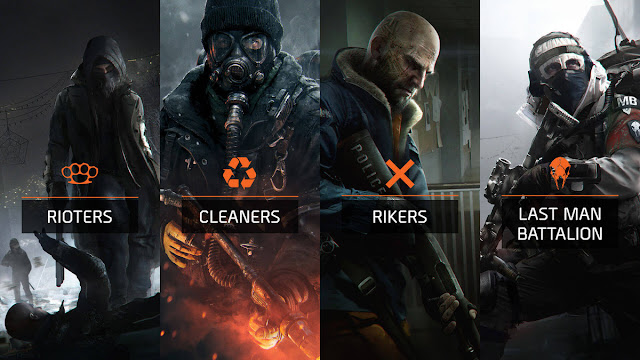 The story involves a flu-like illness that wreaked havoc on New York city, taking enough lives to leave the city in a state of martial law. During that time the city was taken over by looters and rioters. Various factions formed taking control over different areas of the map. The job now falls on the special agents of The Division to take back the city and help the survivors living there. Doing missions awards skills and helps extend your foothold on the city. Though with such little character establishment, it's hard to feel much like a special agent. In fact, until they started telling me that I was special agent, I felt more like a random citizen pulled off the street and handed a gun than a special agent. What sort of training did these special agents receive? Where did they come from? These are things that aren't told (at least in the early portion of the game).

It really is a shame that despite the game's attempts to give enough background to establish the world state, it does so very little to set up the character you play. After the brief character creation scene you're immediately dropped into the map and allowed to begin doing missions for The Division. That's about all the setup the game gives as to who you are. Cutscenes also contain, at least up to this point, no dialogue options and offer no choices. So the idea of building a character or personality is nonexistent. The world state is, however, interesting enough to seek out the games various collectibles that grant backstory and help give a sense of depth to the world for those that want it, but they require the player to actively seek them out.


While wandering the city, it's hard not to notice the lack of people. It's an apocalyptic future, but I can't help feeling as though there should be more people living in this world, either non-player controlled or otherwise. For a game that's supposed to be always online, I didn't expect it to be such a solitary experience.

The map is, however, fairly full of side missions and what they call "encounters," even if these feel like minor distractions. They're repetitive fetch quests that involve going somewhere, killing a handful of enemies, and looting whatever happens to be available. Sure it's a grind and loot RPG shooter, but these elements really put the "grind" in this game. Even a bit of storytelling or context could have gone a long way here.

And as for the games much touted "Dark Zone" multiplayer mode, it feels something like Gran Theft Auto's "Free Roam" multiplayer mode.  Players are free to wander the Dark Zone looking for non player controlled enemies to kill and loot, or they can fight other players. Most people will head into the Dark Zone with a group looking to take on other players in the hopes of stealing loot, but all this means you're not likely to want to venture into the Dark Zone by yourself.

It is, for all intents and purposes, a multiplayer game. The story mode is better in co-op, and the multiplayer mode certainly requires a few friends to make it worth it. Playing with people makes this game very much worth it. The third person shooter mechanics, strong graphics, and unending loot grind make the game enjoyable, but the lack of a true sense of immersion into this apocalyptic world is likely to turn off many. I'll have to stick it out to see where the story goes from here, and thankfully the core gameplay is strong enough that I won't mind doing so.