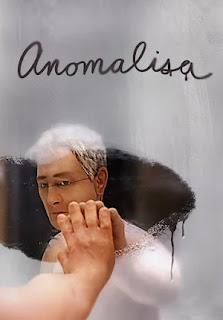 Generally every film tends to be considered decidedly a director’s project. Even if a big name writer is attached to the project, they typically get mentioned as a footnote. Then there’s Charlie Kaufman, a writer whose stories and characters feel so original and different from everything else going on in the world of film that every one of his films, even those directed by someone else, are decidedly his films.

His latest is the Kickstarted animated film version of his collection of “sound plays” of the same name, co-directed by stop-motion animator Duke Johnson. The fact that they used 3-D printed puppets even seems like a clever decision upon further examination, and Kaufman allows them to be self aware about the fact that they’re puppets. Their movements, particularly that of their facial features, look smooth, but there are noticeable lines segmenting the forehead, and the lower portion of the face, as if they were interchangeable pieces. The main character seems to take note of these pieces, and the potential interchangeability of them, and it terrifies him, particularly in one dream sequence.

Before I get too lost trying to analyze Kaufman’s deeper elements, I should mention the basics. The story involves a customer service expert, Michael (David Thewlis), whose recently written a book about the subject. He’s just arrived in Cincinnati for a conference in which he’s due to speak. When he arrives he’s taken to his hotel in a taxi whose driver can’t seem to stop talking. When he arrives at the hotel, he’s greeted by hotel staff that all look and sound the same (and look and sound the same as the taxi driver). He’s lead to his room by a bellboy who can’t seem to stop talking, and all the while he nods and gives brief confirmation of their attempts to happily engage him in conversation, even if he doesn’t particularly enjoy the conversation. We get the sense that he's heard it all a thousand times. It might initially seem like poor character design that most everyone seems to look alike, and a strange choice to have Tom Noonan voice every character other than the two leads, but it soon makes sense (more on that later). Eventually we realize the hotel’s staff was made to implement the strategies he himself put forth in his book. We come to understand this early scene and his sheepish responses through a different lens. He doesn't lash out at their canned pieces of conversation because he's likely responsible for it.

Boredom and loneliness cause him to call an old girlfriend for a meetup. However their brief meeting doesn’t go very well, it seems she isn’t as enthused to see him again after all this time as he thought she might be. Their brief encounter certainly doesn't satisfy his longing for whatever it is he’s searching for, so it’s back to his room and his loneliness. It’s an indication that he has some bad memories tied up in this city, yet the fact that he’s seeking them out indicates how desperate he is to get away from his real life with his wife and son.

He and most of the people in this film, despite their “puppetiness,” feel more like real people than a lot of people in other movies. They’re looking for something, expecting to find that fun transformative event that may or may not be tied to a person. It’s found in so many movies, why couldn’t we all just get out for a bit and happen across something similar to fix our problems? Kaufman knows reality is rarely so inclined to produce such a thing.

From the lonely confines of his room Michael suddenly hears a friend’s voice in the hallway and rushes to find them. Instead, as he’s knocking on doors hoping to find his friend, he meets Lisa (Jennifer Jason Leigh) and Emily. They’re in Cincinnati to attend his conference, and both of them are clearly fans of his, but Lisa immediately stands out. Unlike everyone else we’ve seen and heard up to this point, she has a different face and her voice doesn’t sound exactly like everyone else’s. He knows he has to take advantage of this rare encounter by inviting her for drinks at the bar and eventually impulsively inviting her for an intimate night in his room.

Michael is perhaps disarmed by her honest simplicity, taken in by her charm, even if she’s awkwardly clumsy and lacking confidence. In fact, despite their differences in terms of self confidence, they are more similar than they are different. He can’t take his eyes off of her, and seems oddly fascinated by the sound of her voice, but she is after all the only person with a unique face and a voice of her own. But rather than letting her be Michael’s transformative event, Kaufman brings the fun adventure back to reality by indicating Lisa’s transformation into sameness. Given enough time, even new things become the same old same old.

Perhaps Kaufman is being too dedicated to reality rather than allowing the more satisfying Hollywood romance take over, but the way he presents it is as unique a thing as I’ve seen in some time. It ends abruptly just as it felt like it was building to something that might have given us something truly transformative, but for better or worse that seems in keeping with what we’ve just seen.

For those that don’t know, or didn’t realize, in order to make sense of Kaufman’s story we have to see the hints he’s given us. Kaufman’s “sound plays” were originally written under the pseudonym Francis Fregoli, and the hotel in which Michael stays is called The Fregoli. Both are references to a rare disorder called the “Fregoli delusion.” A person with this disorder often suffers from the paranoid delusion that different people are actually all the same person in disguise, and worse yet, this person has it out for them. Understanding this makes sense of the main character and everything he thinks might be going on around him. But this film is less about the condition and more about the mid-life crisis Michael seems to be going through. The delusion of everyone and everything being the same is perhaps Kaufman's method of articulation. The fact that we can perhaps identify, not with the rare condition, but with Michael's crisis seems an indication that we might all have a certain amount of this delusion in us. We are all trying to get away from the sameness of everyday. As such Kaufman and Johnson have crafted a beautiful, thoughtful piece of art that breaks from the sameness, even if it’s all about it. But like the great Roger Ebert used to say, “It's not what a movie is about, it's how it is about it.”