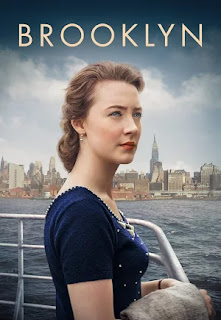 As I check more movies off my 2015 watchlist, “Brooklyn” was next on the list. But so late to the party, I’ll write more to those who have seen the movie (spoiler warning, whether or not this is the sort of movie you’d even care about spoilers). It’s a movie that received strong reviews and garnered a healthy dose of awards buzz earlier in the year, particularly for Saoirse Ronan’s lead performance as a young Irish immigrant caught between two worlds and two potential love interests. It’s based on Irish novelist Colm Tóibín’s 2009 book of the same name, and is an example where the title of a film is something of a spoiler in and of itself.

It begins with Eilis (Saoirse Ronan), a young Irish woman living mostly unhappily in her home town where she can’t seem to find a job or a man to sweep her off her feet. But she would come to miss her family and hometown after being sent away to America in order to find work and, perhaps, a better life. At first she’s quite homesick and shies away from interactions with customers at the store she ends up working at, but after meeting a charming young man she warms up to her new home and breaks out of her shell. The young man is Tony Fiorello (Emory Cohen), an Italian plumber with the ambition to combine his family’s various talents into an operation that would build, own, and maintain a new housing development where he and his eventual wife could live. He and Eilis meet at a community dance, and he takes an instant liking to her. The film’s most charming scenes are these initial interactions between Eilis and Tony. They generate an instant rapport, and Ronan and Cohen maintain a strong sense of chemistry throughout. 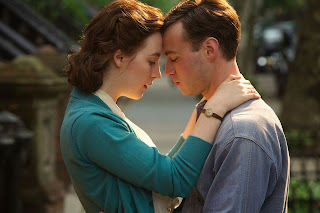 Aside from meeting and spending time with Tony, Eilis also begins taking classes for bookkeeping with eventual plans to become an accountant like her older sister. As she leaves her classes each night, she finds Tony waiting to walk her home. With a new friend and potential love interest, she finds herself warming up to Brooklyn and her feelings of homesickness die down until news of her sister’s untimely death arrives. It forces her untimely departure from Brooklyn for a short reunion with her now lonely mother. However, before she leaves Brooklyn, Tony confesses his love for her and asks her to marry him before she leaves, as if locking in her love and giving her added incentive to return. The fact that their marriage is held in secret (and that Tony wants it to be a secret in the first place) is something of an illogical detail that amounts to a plot contrivance meant to stir up unnecessary drama in the latter portion of the film.

Upon her return to her small town home in Ireland, her mother and friends conspire to keep her around as long as they can. They find her work taking over for her now deceased sister. Her friends have scheduled a wedding for a week after her scheduled return to Brooklyn, and her mother accepted the invitation on her behalf. She is also forced into courtship with a man who is soon to own a family run pub in Jim Farrell (Domhnall Gleeson), a pleasant if not particularly interesting young man. Eilis’ return to Brooklyn keeps getting put on the backburner, and all the while she finds herself surprised by how much she enjoys Jim’s company. Of course, eventually she’ll have to decide which life she wants to live. As if there were any doubt as to where Eilis’ heart and future would reside the title stands as assurance of her eventual decision.

As is typically the case in book versus film comparisons, what you get in the film is a visual representation of the story, but without the novel’s deeper descriptions of time, place, and inner monologue. Irish director John Crowley, a veteran director of both film and theater, renders 1950’s Ireland and Brooklyn in finely crafted detail and fills the film with moving performances, particularly that of lead Saoirse Ronan, who rightly won herself a multitude of nominations for best actress at various award shows. And Crowley carefully holds the film back from devolving into over the top melodrama, a mistake that would have been all too easy to make. What is a pleasant surprise is just how charming and even funny moments in this film can be, particularly in the first half. In fact, if the entire film had been as pleasantly meandering as the first half, this would have made a perfectly pleasant little portrayal of life as an immigrant in the 1950’s. However, for the sake of romantic drama the film has a second half full of fairly inert drama to get to. And what’s sorely lacking is the book’s highly praised descriptions of time, place, and era culture. Having not read the book I can only imagine that Tóibín gave Eilis an inner monologue expounding upon the finer details of what drove her. Without this inner monologue in the film version, what’s lost is whether or not Eilis had any sort of inner desire or will to do anything other than follow whatever path happened to be laid before her by external forces. Had that been an element in this film we might have gotten an interesting character study. 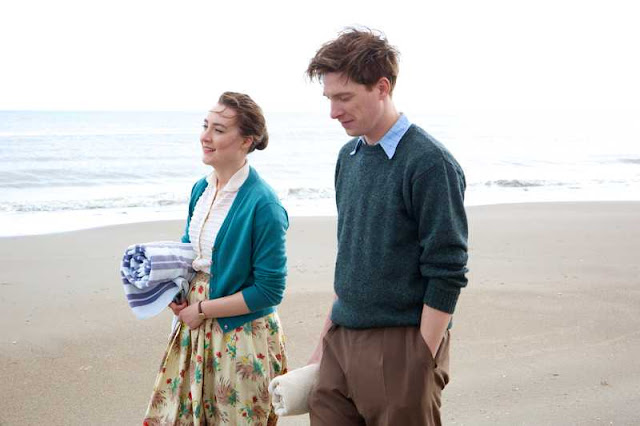 By comparison to the early portion of the film devoted to sending Eilis to Brooklyn and setting up her life there, the second half of the film, devoted her being torn between two lives, feels rushed. It simply isn’t allowed to breath the same way the earlier portion is. And without her inner monologue a lot of the struggle she faces is lost. Barely relevant is Eilis’ feelings of loyalty to her lonely, aging mother, and the shock of her avoidance of Tony’s letters is thin considering just how little the film bothers to get inside her head to assess the “why” of it. Rather than having the intended effect of allowing us to sympathize with her inner conflict, she comes off as weak willed and willing to consider cheating on her husband and leaving it all behind simply because the option arose and someone else wanted it. Yet, the potential relationship between Eilis and Jim is so ill-defined and poorly established that it doesn’t feel much like the love triangle it’s clearly supposed to.

The conflict here is so placid, it comes off as a contrivance that her fateful decision is inspired by the fact that she dislikes the irritating old hag who come along to stir up trouble in Eilis’ life when she’s not holding her busybodies anonymous meetings, rather than Eilis’ desire for another place or person. The way it’s left in the film, Eilis decision is emotionally inert because she could have been perfectly content living in either town with either man, but chose one over the other simply for the amount of disdain she holds for one particular busybody over another (the one in Ireland is related to the one living in Brooklyn who feeds her information). Yet even this decision seems made for Eilis after she admits her guilt. The expected action, in this case, is taken without question. As a romance, every moment spent with Jim and every moment not spent expressing whatever might be her true desire lessens the impact of her relationship with Tony.

Now, if the story had taken the approach of making Eilis a victim, never able to properly make her own decisions for herself, perhaps there would have been something tragically compelling about this tale. However, that isn’t the case here. Her tendency towards following the path provided for her may be partly the point, but it doesn’t victimize her or make her unhappy as an example of society’s unfortunate expectations for the role of women during this particular time period. Even if her whole life had been decided by external forces, she doesn’t find a way to subvert these forces with any sort of compelling conviction.

It isn’t that there isn’t a perfectly pleasant little romance portrayed by stunning performances and beautifully crafted visuals. I genuinely do like Ronan’s performance. But the more I think about this film the less intriguing I find the character and ultimately the film itself.