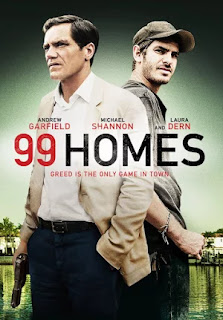 “The Big Short” wasn’t the only film about the housing collapse to come out in 2015, but “99 Homes” took a wildly different approach to the economic turmoil affecting America in the early 2000’s. “The Big Short” is about what happened leading up to the financial crisis of 2007-08, but “99 Homes” is what happened, and continued to happen to people who lost their jobs, businesses and homes, in the wake of it.

It opens on the image of a dead man who had clearly shot himself. The camera pans around in an unbroken shot to Rick Carver (Michael Shannon) observing the scene before exiting the house to take a call. But we quickly realize he’s annoyed at the death and the cops bothering him to talk to the dead man’s family rather than saddened by anything he’s seen. And as if to cement this early impression of him, Carver uses some colorful language to dismiss the police officer’s requests to help calm to family down because it might waste his precious time.

Rick Carver is the tough guy sent to evict people from their homes, and clearly that’s the reason for the ugly scene we’ve just witnessed. He owns the homes, and people who can’t pay back their loans cost him money. He views his work and these situations as a detached businessman. Homes are potential money makers, and it doesn’t matter to him that they are places where families grow up and store their memories. As if we had any doubt about his opinion on the matter, Carver repeatedly warns Dennis Nash (Andrew Garfield), a bright young construction worker who is down on his luck, not to get emotional about his real estate.

Nevertheless that’s where we meet Nash, in the humble home he grew up in and where he lives with his single mother and his young son. But work is hard to come by for a construction worker in this economy, especially when many of the construction companies in the area have already gone out of business. After defaulting on his bank loans Carver and the police show up to evict Nash and his family. It’s easily the film’s most affecting scene. It plays on one of our greatest fears while tapping into our innate sympathy for other people. It also causes anger and disgust for the broken system that has hampered the American dream. Nash and his family are forced to pack up their belongings under police surveillance, while movers pull their furniture from their home and leave it in their front yard.

They move to a low rent motel where many other families who have been evicted were forced to move. But before Nash can wallow in his self pity brought on by these hard times, a chance encounter with Carver affords him an opportunity to work for the man that evicted him. It isn’t pretty work, but it starts as construction and that's what he knows. It might also help him earn enough to get his family out of the motel. For Carver, Nash is clear headed, hard working young man full of desperation. An easy mark to wield and coerce, and someone willing to work even when others refuse. His first day’s work involves cleaning a house that’s been vengefully covered in excrement. Soon after that Carver brings Nash to his own home to do some construction work. The visual difference between the expensive house Carver owns and the smaller houses he evicts people from is staggering.

Carver involves Nash in his schemes to rip-off banks, that starts out feeling like vengeance for the way they’ve treated the people of their community, even if this shady activity quickly starts to feel wrong. He drives Nash around showing him the houses he owns and tries to teach him to see the potential to make money while peddling his cynical worldview. It’s convincing enough to Nash’s ears at first, especially when he’s being handed checks for more money than he’s ever had before. But once Nash has to start being the one to kick people out of their homes, his sense of humanity slowly returns.

Carver even challenges Nash’s very definition the word home. Nash may be dead set on rebuying his family home, but Carver’s convincing when he reminds Nash that he’s made enough and will continue making enough money to buy as many houses as he wants. “They’re just boxes,” he tells him. “Don’t get emotional about real estate,” he reminds him one more time, even as he helps Nash rebuy his old family home.

Ramin Bahrani is well aware of the morality of what these people deal in. The marked difference between Carver and Nash is their work. Carver’s is to own homes, while Nash’s is to build the homes. One indicates a position of power and money, the other is a working man’s position. To an extent Bahrani is able to get away with the general acceptance that the rich man with his lofty position and fancy houses is a heartless man stealing people’s homes, while the good hearted working man still maintains the humanity with which to do right by others.

Yet Bahrani makes an earnest effort to find some form of humanity in Carver. Michael Shannon gives an excellent performance as a man who had been in Nash’s shoes once before, but found a way to feed on this bad economy. “America doesn’t bail out losers. America bails out winners.” He proclaims his doctrine to Nash as if ample reason for taking advantage of things in a time of crisis.


Nash, on the other hand can see himself slowly becoming Carver, but has his family to keep him grounded. He tries to keep this new secret life with Carver a secret so his family and the ones at the motel don’t know what he’s turned into, but secrets that involve earning large amounts of money rarely stay secret long. Andrew Garfield turns in a strong performance as the desperate man who turns to a shady business to regain his life. The film follows him through emotional highs and lows that seem to keep him on the verge of wild outbursts.

"99 Homes" is a solid mixture of genres. It’s an emotionally trying drama that often feels like a thriller. It’s the poor man getting into criminal activity and losing his humanity as his wallet inflates. It also has elements of a rebellion against the broken system that threatens the American dream. As his humanity wins out, his ability to continue working within the broken system gives out. But at times it’s without much conviction that Bahrani goes about these events. Many key plot points are made possible by happenstance rather than choice, which tends to result in lack of conviction with which Nash goes about making his important decisions.

Bahrani does, however, know how to effectively dial up the emotions during tense eviction scenes with repeated shots of crying children, hysterical wives and stammering old folks. It’s obvious tactics, but effective nonetheless. However not all of these moments work. One in particular has the young boy of a man being evicted walk up to give Nash an approving glance after Nash makes an important admission. The moment feels very contrived, and betrays our intelligence. It’s as if Bahrani didn’t believe we’d reach the conclusion that admitting his guilt was the right thing to do without that shot.

Nevertheless, "99 Homes" is a an emotionally affecting film that didn't get the advertising of some of the bigger films from last year. Nor did it seem to gain enough momentum from critics to factor into awards talk. But if you're still catching up with the bigger movies of 2015, this would make a nice double feature with "The Big Short." Even if "The Big Short" is the better film, this cast here is very good, and many will find it easier to relate to.