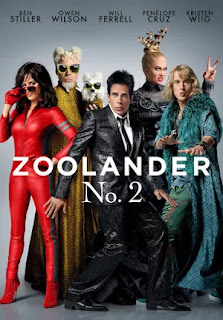 Judging comedy is difficult. Difficult because you have to try to explain whether a joke is funny or not, and comedy, as we know, is subjective. So if we can’t just go by whether all the jokes make you laugh (which is downright impossible) or at the very least, just enough of them do, then we have to fall back on more simple critiques that judge the story and characters. Yet in this case, even these quickly become muddled because of how little this film is interested in telling a cohesive, coherent story. It is satire about the fashion industry and to an extent, about movies and the people who watch them.

It begins with one of the film’s many cameos with Justin Bieber (playing himself), and immediately takes joy in killing him in a way that’s comically excessive, but done for the sake of commentary. There’s even a line later in the film when someone is asked why they killed him. The response is something to the effect of, “are you kidding me? It’s Justin Bieber!” As if to say, who doesn’t want to kill Justin Bieber? Perhaps it’s pandering, but it’s one of those self aware moments in which Ben Stiller and his team of writers (Justin Theroux, Nicholas Stoller, and John Hamburg) play directly to their viewers. They're saying, "we know you probably want to see this." And if the giddy laughter in the theater I attended was any indication, this and quite a few other moments scratched that itch. Yet this film, like many others, becomes a lesson in the danger of collecting these near SNL sketch moments if they’re not brought together seamlessly by a solid main storyline (see The Ridiculous 6). “Zoolander 2” like many other similar comedies, stops repeatedly to insert jokes and bits that are likely to make you laugh even if they threaten to derail whatever narrative momentum the film might be building.

Remember a bit from the first film in which Derek and Hansel try to get sensitive files out of a computer but are too dimwitted to know that in the computer, and inside the computer are two different things? The scene devolves into a commentary on the supposed stupidity of models as well as a goofy reference to Stanley Kubrick’s “2001: A Space Odyssey” with Derek and Hansel essentially becoming apes discovering something for the first time. In a lot of ways the scene is simply too much. Funny perhaps, but too much. A throwaway bit that would have made as much, or more, sense on SNL as it would here. This is the sort of comedy “Zoolander 2” has in spades. It will make you cringe as much as it makes you laugh. Which is another reason why I find this film particularly hard to judge. It would seem like wasted energy to try to breakdown and evaluate the story, but I digress.

A brief investigation by interpol informs us that Bieber was just one of the “world’s most beautiful people” that have been killed recently. All of them died sending one final selfie to social networks making a face that looks suspiciously like one of Derek Zoolander’s trademark looks. That leads Valentia (Penélope Cruz), the head of Interpol’s “Fashion Crime Division,” to track down Zoolander hoping he can help translate the meaning behind these faces and what their death’s have in common.

In the meantime, a lengthy “catch up” sequence takes us through numerous news reports that fills in the 15 years between the first “Zoolander” and this film. It features a wide array of recognizable anchors and TV hosts from the past 15 years telling us that "The Derek Zoolander Center for Kids Who Can't Read Good and Who Wanna Learn to Do Other Stuff Good Too" collapsed due to poor building materials and crushed Derek’s wife Matilda (played by Ben Stiller’s real life wife Christine Taylor). To make matter worse, Derek’s son was taken away from him by child services because he was proven to be unfit to raise him. With no job and no family, Derek exiles himself to “extreme northern New Jersey” that comically looks like a snowy, mountainous no man’s land.

However, he receives a request from elite fashion designer Alexanya Atoz (Kristen Wiig) to rejoin the fashion world, and a few encouraging words from Billy Zane (one of the returning cameos) convinces him that getting back to work could help him reconnect with his son. Billy Zane then travels to give a similar message about reconnecting with the fashion world to Hansel (Owen Wilson), who had gone into exile due to ever so slight damage to his face after the Zoolander center collapse incident. What really convinces him to go however, is the fact that his significant other (a bizarre collection of people that make up his orgy, including one particularly humorous and unexpected cameo) has gotten pregnant (yes all of them), and he can’t face the music.

Eventually Derek and Hansel end up back together again after finding themselves being made the laughing stock of fashion world for how “old” and “lame” they are. Though rather than making them the top of the fashion world again, the story here has them joining Valentia as secret agents of sorts to stop Atoz who has teamed up with Mugatu (Will Ferrell) in some sort of revenge plot against the fashion world.

There are, of course, significantly more cameos to be found throughout the film, but that’s one way in which “Zoolander 2” derives its comedy. Most of which are funny simply because so and so showed up, rather than anything they chose to do with them. Unlike the first "Zoolander," a handful of famous faces from within the fashion world take part, as if to show they have a sense of humor about themselves and the industry.

The subject (or should I say target) of all of the film’s frivolous, but mildly enjoyable, humor range from the fashion industry, to age versus ever escalating technological trends, to current concerns over gender identification and body image (particularly for plus sized models), and a surprising range of other topics. The film becomes something of a farcical spy film as well, imagining there’s some truth to the whole “fashion police” thing. I half expected Austin Powers to show up at some point for a bit of crossover. All this is also to say that for an older fashioned ridiculous comedy it’s more timely in its references and subject matter than most satirical comedies these days. Yet this is minor praise for a film clearly not looking for any. It might have felt more at home in the late 90’s or early 2000’s, you know, like shortly after the release of the first "Zoolander," while ridiculous comedies like the “Austin Powers” films were still making bank at the box office. It seems opening next to "Deadpool" was box office suicide for "Zoolander 2," but then again if the first "Zoolander" is any indication, it isn't the sort of film to care about box office success either. Which means we might get yet another one of these in the next 15 years.

You’ll notice in all of this I haven’t really said much about Zoolander’s main objective, which is to reconnect with his son Derek Jr. (Cyrus Arnold). It is what little the film has to ground itself, and it becomes an afterthought fairly quickly. By the time you’ve seen the trailer you’ll immediately know whether or not you’re the target audience for the film. It’s a ridiculous comedy that wants to be so over-the-top, even over-the-top comedies say, “now that’s ridiculous.” And considering that’s what it wants to be, it succeeds. However, as a movie it does not, but it isn’t the sort of movie in which you'd care about that.