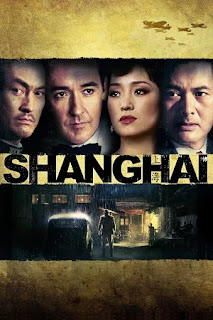 There are many things that are hard to explain about this film. It had been long sitting on the shelf waiting for a western release. It was made and released back in 2010 in China, but became just another one of Harvey Weinstein’s shelved projects. Why any film gets this sort of treatment is just one of the questions surrounding this film. The rest involve the tangled mess of a story that’s overly difficult to sort out before realizing it didn’t carry the emotional resonance to make it worth the effort.

The story feels like some sort of lackluster combination of "Casablanca" and "The Maltese Falcon" set in Shanghai as America is on the verge of joining World War II. The story follows Paul Soames (John Cusack) an American spy masquerading as a writer for the Shanghai Herald, who finds himself the third wheel in a love triangle that barely was while investigating the murder of his friend Conner (Jeffrey Dean Morgan) who was a fellow American spy. As Soames finds himself growing closer to Anna Lan-Ting (Gong Li), the wife of notorious Triad boss Anthony Lan-Ting (Chow Yun-Fat), he quickly learns of her ties to the underground resistance and how she may or may not have been connected to his friend’s death. This, of course, comes during a time when Japan was tightening its control over China and threatening to take over Shanghai, which had up to this point been the last vestige of freedom in China.

Soames has reason to believe that Conner was killed because Sumiko (Rinko Kikuchi), the Japanese girl he had been seeing, turned him in to her other lover, the villainous Tanaka (Ken Watanabe). Soames also learns that Conner was close to uncovering a plot by the Japanese to attack America. If he can track down Sumiko, he might be able to get the information necessary to warn of an impending attack.

Now all of that may sound fairly interesting, and it is, but the delivery falters under too many ideas and poor execution. John Cusack is no Humphrey Bogart. Director Mikael Håfström is no Michael Curtiz or John Huston. And screenwriter Hossein Amini is no Dashiell Hammett. Their efforts here are, however, admirable considering the simple fact that the Asian side of the war is just as rife with tales of humanity as the European side, that seems to see far more commercial coverage. But when it’s this derivative it’s not hard to imagine why the Weinsteins shelved it for fear of poor critical reception.

Håfström is known for his horror thrillers, but here he’s working in wartime drama, mixed with love triangle romance, all dressed up like a noir, mystery, thriller. Yet his clunky direction tends to waver between these genre elements rather than use any of them effectively. Soames’ voice overs and attire, namely the fedora worn so low it threatens to hide a portion of his face, along with the rain soaked night time streets are certainly reminiscent of the hard boiled noir detective stories that it wants to invoke, but it isn’t a consistent stylistic choice. More often than not it disappears in favor of lighter melodrama in which several characters feign love interest in one another, despite maintaining their supposedly happy marriages. And as important an element as all of these love triangles are supposed to be, none of them are delved into deep enough to become emotionally involving.

“Shanghai” is full of people with unknowable motivations that seem to waver depending on the scene. Each character could just as easily be spying on, spying for, or loving or killing just about anyone they happen to interact with in the next scene. Håfström’s method of showing numerous killings and allowing the camera to rest for a moment on the dead bodies of nameless people we don’t know fails to add weight to the circumstances of a war torn world in which human life seems to lose value on a daily basis. “Casablanca” knew that “the lives of three little people didn’t amount to a hill of beans in this crazy world,” but offered characters doing selflessly noble things for the good of humanity anyway. “Shanghai” however, features uninspiring characters doing far less significant things aided by dumb luck and a sense of self preservation. Worse yet Håfström misses an opportunity to properly establish the threat of the impending attack on Pearl Harbor, which could have added a welcome immediacy to the proceedings.

The disappointing revelations this movie has in store are that nothing these people did mattered, and far fewer of them are doing anything of significance anyway. Pearl Harbor, as we know, was still bombed. Japan still expanded its grip on Asia. And the few surviving characters of interest here don’t feel much like love interests.

While Cusack turns in a solid performance even if he feels out of place when the the action requires him to throw a few punches and hold a gun. However the film asks little of the other leads. Gong Li’s character lacks the fiery spirit and depth of character to make a compelling lead. Chow Yun-Fat received far less screentime than he deserved, but makes for an imposing presence later in the film when he’s asked to hold a gun and take control of a situation. However, the script might just fail Ken Watanabe’s character the most. In the early going he is a terrifying figure, the representation of the imposing threat of Japanese occupation. But a later scene tries to convert him into a sympathetic character without the necessary time spent in the middle to facilitate the transition.

There's a wealth of interesting ideas here, but most of them don't mesh particularly well or feel like they've been fully fleshed out by the end. It's not dark and moody enough to be noir, nor is its mystery clearly defined or satisfyingly resolved. And it's lacking the thrills necessary to make it a thriller. It's an interesting story that never quite gets off the ground. It's multiple love stories never become emotionally involving and certainly lack the sort of emotional resonance they're aspiring to.