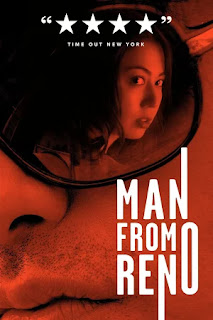 
This spellbinding mystery thriller doesn’t take long to set it’s hook. The mystery that stretches from Reno to San Francisco, begins with a small town Nevada sheriff, Paul Del Moral (Pepe Serna), accidentally hitting a Japanese man with his car on a densely foggy night. After taking him to the hospital, he realizes the man had already been bloody and his clothes already torn. When he returns to ask the man some questions, the man is gone, which sets an investigation in motion.

The parallel line of action follows Aki (Ayako Fujitani), a Japanese writer, who is on a book tour promoting the latest of her wildly popular detective stories. However before the pressure weighs too heavily, she escapes to San Francisco without telling anyone. Over the course of the film we learn she’s trying to end her detective series, because it reminds her too much of the fiance she lost. His death was some years ago, but she’s never gotten over it. Nevertheless, while she’s there she meets a charming Japanese man named Akira Suzuki (Kazuki Kitamura) who happens to recognize her. She continues to see Akira out of an impulsive need to escape her current life as well as her past. However, after an amorous evening together, she finds that he’s left and only his suitcase remains behind.

Following Akira’s disappearance, Aki finds that a handful of strange characters seem to be following her. One seems to be stalking her in a white van constantly taking photographs of her, while at least a few others ask her to hand over some mysterious “it” that would seem to have immense value. Aki is game for an investigation of her own due to her affinity for mystery novels and the fact that she’s now involved in whatever it is that’s happening, whether she likes it or not.

Inevitably these lines of action have to intersect. Discoveries made by the sheriff lead him to San Francisco where his investigation leads him to Aki. But just what their separate investigations have to do with each other I’ll leave you to find out. I realize this brief setup doesn’t tell very much, but we’re already nearing spoiler territory. That’s an indicator of just how densely packed and full of twists this story is. Writer/director Dave Boyle and his co-writers Joel Clark and Michael Lerman do a good job of leaving a trail of breadcrumbs, but they’re clever enough that not all of them mean what we expect them to. There's enough mystery and misdirection and mistaken identities here to warrant the "Hitchcockian" label.

In fact, for a good portion of the film, until the two investigators team up, we’re left guessing about everything including the timeline of events. Boyle and his co-writers take a pack everything including the kitchen sink approach. Things quickly become so complicated you might wish you’d been taking notes to try to keep up with it all. It isn’t that the film is impossible to follow, but the script certainly does its best to blindfold us, throw us in the back of a van, and drive away recklessly swerving so as to throw off our sense of direction. We meet a lot of side characters with connections to the McGuffin (yes, of course, there’s a McGuffin), and some with connections to Akira Suzuki who is either missing or dead. However most of these side characters only matter in that they appear once or twice to deliver a twist before disappearing for the rest of the film. At least a few of their plot points could have carried more weight if only they were allowed to.

Richard Wong’s cinematography is effectively simple, but manages moments reminiscent of classic noir thrillers of cinema past. The performances from the leads are mostly solid. The one knock is that Ayako Fujitani’s charming performance tends to come and go whenever she’s asked to speak english. Nevertheless, as a good noir thriller should, it spends a good deal of time exploring Aki’s character, and despite her being a fairly strong but damaged character, Fujitani plays her with enough vulnerability that it becomes increasingly difficult not to care for her safety as the investigation intensifies.

However, the show stealing performance here belongs to Kazuki Kitamura, who manages a lot with only a limited amount of screen time. He’s so good, and this twist ridden story is so endlessly engaging, you’ll want to watch it again almost right after it’s over. Doing so is likely to reward the careful viewer. For some, the ending may feel like a trite bit of genre subversion (that to expound upon would lead to spoilers), but it's a strong ending nevertheless.