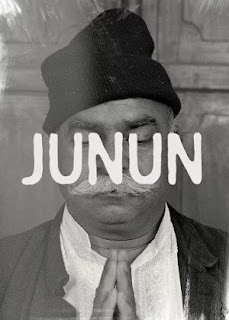 As someone who loves music but is not musical, I’m always very much in awe when I watch people create music. Pleasing sounds that give both voice and soundtrack to our lives rise out of thin air. It’s one of the reasons I came away from “Love & Mercy” with even more profound respect for Brian Wilson. I was deeply fascinated by every scene that took place in the recording studio. “Junun” is a documentary film that spends nearly its entire runtime in the space where this international collection of artists collaborate to record their album “Junun.”

The space where they chose to record is the beautiful, historic Mehrangarh Fort in Jodhpur, Rajasthan. And the collaborators are Israeli composer Shve Ben Tzur, English musician Jonny Greenwood (of Radiohead fame), and Indian ensemble the Rajasthan Express. Greenwood has composed music for a number of films including Paul Thomas Anderson’s own “There Will Be Blood,” “The Master,” and “Inherent Vice.” It make perfect sense that he would return the favor to direct a behind the scenes look at the creation of this album. It isn’t so much documentary, as few people speak, and usually when they do it isn’t about the music. Rather this is an extended music video of sorts, and a beautiful one at that.

It isn’t just that the music is beautiful, Anderson finds beautiful images that accompany the music well. After a brief prayer to start the day, the camera sits in the middle of the circle of musicians and spins in 360 degrees as they play their assortment of instruments. One scene breaks away from the room in which they’re recording the music to witness a man feeding a vast swarm of swooping birds. The man explains the birds trust him and he trusts them, and he and his father and grandfather have kept this feeding of the birds a tradition. Anderson uses a drone several times throughout the film to great effect, but none better than the spectacular aerial shot of the feeding of these birds as the music builds in the background.

Because there are no interviews and it isn’t done with a traditional documentary in mind, the film offers very little in terms of understanding the work in progress or those who are working on it. It does however make for a thrilling auditory experience. Anderson’s visuals certainly offer a closeness to the music that we might not have received otherwise. And the aerial shots certainly add a visual flair to the film. But it’s clear that Anderson’s unassuming technique is to stay out of the way of the collaborators. The result is that we get to observe as if we were sitting in the room with these artists, enjoying the music as they’re creating it. We feel almost a part of it. Rather than listening to the album later, we get to sit among them hearing it coming straight from their instruments. It’s hard not to have an appreciation for the process and the completed work after such an experience.

The beauty of the fact that this is an international group of talents making music together is not lost in this film. In fact a toast is made toward the end to acknowledge what a wonderful thing it is when different people come together to create a work of art. That’s what “Junun” is, and we have this film to thank for being able to experience it.