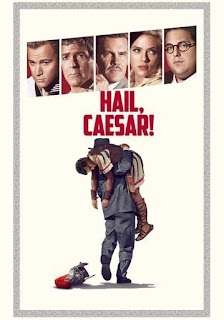 
Of the Coen brother’s last two films, both were serious films delving into tough stuff. “True Grit” went into Hollywood’s past to remake a classic western, and “Inside Llewyn Davis” was a drama about the difficulty of an artist/musician trying to stay true to his art and make it in a tough business in the 60’s. Perhaps It's a natural progression that they finally return to their comic roots for a film that further delves into Hollywood's past, but from the perspective of someone on the inside of the artist’s business. It is perhaps, a “Singing in the Rain” for the modern age.

Perhaps at its heart it is about the value of cinema but as the Coens are known to do, they pack their story with more depth worth exploring. In fact I wouldn’t be surprised to see many articles written exploring the overt religious and political aspects of the film. The Hollywood blacklist scandal is touched on, as communist writers kidnap one of Hollywood’s biggest movie stars, Baird Whitlock (George Clooney), in the hopes of being paid a ransom, while perhaps converting him to their cause. But it seems to be the religious aspects the Coens were more interested in.

The jumping off point for the Coens was following a character, Eddie Mannix (Josh Brolin), who works for the biggest studio in Hollywood, allowing us to witness the sorts of shenanigans he puts up with as the only sane person responsible for a studio full of insane artists. From the outset the Coens establish Mannix as a religious man and a metaphorical Christ figure taking on the sins of his underlings and clearing them away to keep a spotless public image. That was, of course, the job of a studio fixer in those days. They were meant to take care of their stars, who they owned by contract. Any one of them being smeared in the tabloids would reflect poorly on the studio as a whole. His “children” were valuable commodities and he had to keep them from getting into trouble. Yet the religious aspect is taken a step further by the fact that he’s overseeing the production of their latest biblical epic titled “Hail, Caesar!”

One of the best scenes is one that begins like a bad joke. “A Catholic priest, a Jewish priest, and a Christian pastor walk into a room…” Essentially members of the main religions of the time are represented in the room, all to discuss whether or not the script for “Hail, Caesar!” is offensive to them. The scene devolves into a hilarious debate about differing religious beliefs and whether or not the film is offensive. It’s hilarious in that no one can agree, even if they all agree the film isn’t particularly offensive, or at least not more so than other films involving biblical stories.

Nevertheless Mannix returns frequently to the confessional booth to apologize for his sins, and perhaps the ones placed on him. He asks for forgiveness for the small things like sneaking cigarettes behind his wife’s back despite promising to quit, but it’s clear he’s there for another reason. When he works up the courage, he admits the doubt about his career choice that’s been bothering him. He has been repeatedly tempted with a job offer to work for Lockheed, an aircraft manufacturing company. But he can’t seem to stand the way the man offering him the job constantly knocks the film industry, and worse yet Mannix can’t stop worrying about the people contracted to work for the studio. In fact, there is a bit of irony here that the communist writers who feel they’re being underpaid and under-cared for by the studio, and the amount of time Mannix spends worrying about all of these people.

The fun of the film is in the establishing of all the actors and directors Mannix worries about, and the trouble they get themselves into. There’s Scarlett Johansson’s DeeAnna Moran who finds herself pregnant out of wedlock and unsure of who the father is, which would be extremely scandalous in those days. And there’s a bit of miscasting that throws a heavily accented southerner, known for his cowboy films, into a rather annoyed English director’s latest British high society film.

It’s another one of the film’s best scenes. Ralph Fiennes, in a role that recalls his turn as a hotel owner in “The Grand Budapest Hotel,” is forced to direct Hobie Doyle (Alden Ehrenreich), who can’t seem to pull off the dialogue no matter how many times it’s repeated for him. It’s one of the scenes that shows both the Coen’s fascination with dialect and accents, as well as the trouble for classic Hollywood finding roles for actors of the silent era in the time of the “talkies.”

Each of the films being made are lovingly made to look authentically dated in terms of their visual quality. They look like they’re in era appropriate Technicolor, and as such give off the feel of watching a classic film. The long winded musical number featuring Channing Tatum’s Burt Gurney as a sailor is particularly well done and certainly reminiscent of Hollywood classics. It’s hilarious how it devolves, perhaps accidentally or perhaps purposefully, into a homoerotic dance that is a likely reflection of classic Hollywood’s tendency to hide themes that would have otherwise been against the production code.

Between the sailor musical, the aquatic film featuring Johansson’s character, Hobie Doyle’s comedy westerns, and of course the main feature “Hail, Caesar!” all of the films are the sort of classic films that don’t get made anymore. As such, it’s hard not to appreciate this film simply for the joy it is experiencing these brief snippets of genres lost to cinema history.

Even the scenes outside of the studio, that are clearly not scenes from one of the various films being made, have a very purposeful artificialness to them both in terms of the visuals and the performances. It’s as if the actors can’t help but put on a performance even outside of their work. If they didn’t repeatedly make it apparent, you might not know which scene was real and which scene was apart of one of their studio movies.

However fun all of it is, where the film seems to be falling flat for people is likely Mannix’s journey which is meant to tie it all together. Rather than a coherent set of events, a building of tension, and a purpose that drives everything forward we get a series of fun vignettes that don’t piece together in a particularly meaningful way. Mannix struggles with his crisis of faith/purpose until he decides not to, and all of the problems that arise seem to work themselves out without specific choices or actions taken. The loose ties that connected these scenes never manage to build any sort of compelling drama that make it exciting to get from one scene to the next. When it comes down to it there is very little narrative thrust to be found here. It leisurely goes from one scene to the next hoping for laughs until every situation resolves itself because it’s time to end the movie. I can’t help finding myself somewhere in the middle on this movie. On the one hand, these vignettes are so fun and so well made it’s hard not to appreciate the film, but on the other hand, the bland central story doesn’t nothing to elevate the film.

Though most of the star studded cast gets very little screen time, they all perform so well it’s hard not to wish for more. If we were truly lucky we’d get to see each of these films made in full, but I can’t say that’s likely.