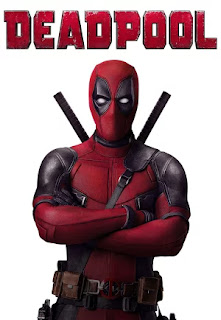 The merc with a mouth has finally gotten his own movie and it seems to be trying to make up for the failures of both last year’s "Fantastic Four" reboot and "X-Men Origins: Wolverine," which was the movie in which Deadpool first appeared. This is the film most Deadpool fans wanted. It seems to be entertaining enough for the masses considering its box office returns, but there's enough flaws that weighed on my mind as I was thinking about this movie after I left the theater.

The laughs are certainly there, even if much of the humor is juvenile. Deadpool is a foul mouthed joker constantly making light of every situation. While that can be entertaining at times, it can also be grating. Worse yet, at some point all sense of dramatic tension is lost when the character can’t be bothered to take anything seriously.

After a humorous introduction that jokingly introduces the people that made the film with mock credits rather than the actors, writers or the director's actual names, it should be clear that the film is a mockery. With Deadpool’s constant fourth wall breaking and acknowledgment of the other X-Men films themselves and the actors that star in them, this film becomes more akin to terrible comedy parodies like "Scary Movie" or "Superhero Movie," even if "Deadpool" is admittedly far better than any of them.

The story here is very thin. It begins and ends with action sequences and utilizes a series of flashbacks to fill in the blanks. Those flashbacks show Wade Wilson (Ryan Reynolds), a former special forces operative, now mercenary living in New York City, meeting and falling for the archetypal character, “the hooker with a heart of gold,” Vanessa (Morena Baccarin playing another version of her character from “Firefly"). But soon enough Wilson finds out he has terminal cancer, but not to worry, it’s nothing a shady experimental super soldier “treatment” can’t fix. After his mutation is unlocked, he breaks free from the site where he received his experimental treatment so he can take down the evil people that administered it to him.

We now live in a world so overexposed to this superhero genre that mutations and Xavier's school for the "gifted" no longer require explanation. It has become ingrained in our pop culture to the point where we can fathom these super humans no matter how bizarre they become. As a result very little of this “unlocking” is explained and eventually a pair of other X-Men show up with no explanation as to who or what they are.

The references to Xavier’s school and the appearance of these other mutants informs us Deadpool is a mutant in the “X-Men” universe, but if Fox's “X-Men” series has taught us anything, it's that the cinematic universe they’ve created is completely bonkers. There is no attention paid to continuity and this revival of Deadpool after a dreadful first attempt at the character in the much maligned “X-Men Origins: Wolverine film,” is yet another hole in Fox's ever crumbling “X-Men” universe. Even more confusing is the fact that all of these characters are Marvel characters but they're being handled by different studios with different plans for the future. The average film goer doesn't understand why Marvel's “X-Men” and Marvel's “Agents of Shield” don't seem to ever interact. Worse yet Spiderman, Deadpool's friend, is finally out of Fox's hands and soon to make his Marvel studios debut in “Captain America: Civil War.” But I digress.

For a movie that spends a significant amount of time making referential jokes about other superhero movies, “Deadpool” essentially follows the same basic tropes found in other superhero films. It was written to mock exactly the sort of film it ends up being. This anti-hero is essentially a "Looney Tunes" character that becomes immortal after yet another experiment gone wrong.

At some point these unkillable super humans (he's not a hero) all fail to conjure the sort of stakes you get with a more human character. The only way to damage them is to go after the people in their lives, and that leads me to Vanessa. She's as bland as can be. Yes she has a bit of chemistry with Ryan Reynolds, but she isn't a character. She's a sex object who received very little screen time if Deadpool isn't around. Their love making montage, in which the two get together over every holiday, as brief as it is, is supposed to endear them to us as inseparable lovers. However she’s little more than young male wish fulfillment complete with surprising knowledge of geek culture that’s supposed to indicate that these two are a perfect match. The writers must have feared that we'd recognize how weak her character is because they actually make her say the words, "I am not a damsel in distress." Yet the film's climax fully relies on the fact that she is exactly that.

Ryan Reynolds plays Deadpool with wit and charm, and he has chemistry with Morena Baccarin. But it wouldn't have surprised me if he had taken the mask off and a more vulgar Daffy Duck had been underneath. Sure there are laughs and violence, and that seems to be enough to ignore the fact that the rest of the film is pretty weak. And as for the comedy, some of it's good, but most of it becomes too much meta-commentary on top of meta-commentary that adds little more than jokes at the expense of the genre that paved the way for this film (including the bad hero films that didn’t work).

Fox has already greenlit a sequel, undoubtedly so they can makes jokes about how formulaic this first film is.