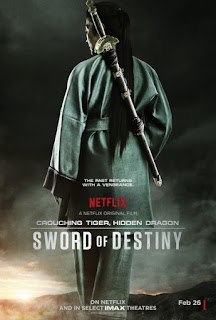 Apparently 2016 is the year for long awaited sequels (see Zoolander 2, if indeed anyone expected the sequel). For a lot of people, the fact that this film is simply hitting Netflix (along with a very limited theatrical release) would seem like an indicator of failure before the film was even released. Especially when we remember that the first CTHD film is the highest grossing foreign film in the US of all time. But as we know, a Netflix release is not quite the same thing as a straight to DVD, or even a straight to digital rental. More people are likely to see this movie (or at least have the option) than could see it with a limited theatrical release. And despite a smaller budget than the first film, "Sword of Destiny" feels earnest enough to avoid feeling like a cashgrab (or whatever the Netflix equivalent might be).
It was filmed in eye catchingly beautiful locations in New Zealand that are quite lush and captured with saturated colors. But where the first CTHD looks to have been shot entirely on location, “Sword of Destiny” suffers from a heavily green screened look. The first was a film made to appeal to western audiences, and it obviously worked. The fact that this film was released on Netflix and that the film is entirely in English rather than Mandarin is just further evidence of the filmmaker's intention to appeal to western audiences. Nevertheless, even in the US, I can't help feeling the language change was a move that is as likely to turn off as many viewers as it might attract.

The fairly shallow story here is based on another novel in the same series as the first film. It's set about 20 years after the first film when an evil warlord by the name of Hades Dai (Jason Scott Lee) seeks the famous sword, The Green Destiny, knowing of its power. He has been leaving an impressive body count in the wake of his quest, and he's tracked the sword to the village where Master Li Mu Bai (Chow Yun Fat) left it in the care of Sir Te. With Sir Te now having passed away, his son (Gary Young) is in charge of keeping it safe. Yu Shu Lien (Michelle Yeoh) finds herself called back into action as the sword is threatened. She calls for help from her fellow fighters of the Iron Way, which includes her former lover Silent Wolf (Donnie Yen) and a small band of uniquely named fighters. And of course, a strong willed young woman named Snow Vase (Natasha Liu Bordizzo) with an impressive skill set of her own, finds herself drawn to a charming rogue Wei-Fan (Harry Shum Jr.).

The characters and storyline here mimick the first film to a fault. Yu Shu Lien (Michelle Yeoh) is again forced to keep herself from a would be lover, and a young couple repress their passion for each other. And of course a dangerous, villainous teacher wants to acquire the famous sword for their own selfish purposes. And, of course, all of these characters are intertwined by a complicated series of past events that play out in flashbacks. Yet there's also a slew of side characters that serve as little more than distraction. They get a fight sequence that serves as both a brief introduction to each of them and their unique fighting style, and something of comic relief, even if the scene comes early enough we didn't really need the relief.

It's scenes such as this, and a few others, that lead to a strange mix of tones in this film. While there was one comic relief character in the first CTHD, there are whole scenes devoted to the sorts of light-hearted comedic martial arts action films that inspired this film, even if the tone becomes far more serious and melodramatic whenever Yu Shu Lien appears on screen. Her moments recall the more dramatic tone of the original.

These tonal inconsistencies aside, "Sword of Destiny" is a fine martial arts film. It's pretty to look at and features some solid fight sequences, even if they’re shorter and lacking by comparison to Ang Lee’s original. And “pretty” and “solid” might have been enough if it weren’t for the fact that by branding itself a sequel to “Crouching Tiger, Hidden Dragon,” it places itself within a shadow it cannot hope to emerge from. It invites comparison to a film that was the first foreign film nominated for a Best Picture Oscar, and was both a critical and commercial hit. As such it’s hard not to look on this film with disappointment even if “entertaining enough” might have sounded like a ringing endorsement without the name it’s attached to. Its two couples and their storylines reflect that of the first film but neither reaches the emotional heights of the ones found in the first film. The shorter runtime might be to blame. At an hour and thirty six minutes long, the film maintains a brisk pace that contrasts with the first film’s slower more deliberate pacing, but it doesn’t allow for the sort of depth that came with CTHD’s longer runtime. The most noticeable sacrifice is that the repressed romances are built on just a scene or two because too much of the rest of the shorter runtime is devoted to barely establishing the handful of aforementioned, inconsequential side characters.

The next place that was sacrificed is the villain, who was severely underdeveloped, despite being a primary figure in the past lives of at least a few of the heroes here. It hints at a political undercurrent, that’s also underdeveloped, and feels overshadowed by the desire for the McGuffin, a plot point that feels shoehorned in as if some required connective tissue with the first film.

When it comes down to it, the difference between CTHD and “Sword of Destiny” is the directors. Woo-Ping Yuen has served as an action choreographer on many great martial arts films including the first CTHD, but he doesn’t have the touch that renowned director Ang Lee has when it comes to directing actors and putting together a compelling drama. The performances throughout are merely serviceable, none of the many newcomers have the charm or screen presence of the actors that carried CTHD (aside from returning star Michelle Yeoh of course). “Sword of Destiny” lacks the finesse of CTHD, always telegraphing its intentions. The result is that this film, at times, feels poorly, even awkwardly constructed. Where Ang Lee would allow a scene to end ambiguously, often Woo-Ping Yuen allows a character’s emotions and intentions to be stated outright, then tries to pause for effect and even then he holds these pauses a beat too long.

Though I suppose screenwriter John Fusco shares some of the blame. His script often feels like it's rushing to get from one action sequence to the next without the appreciation for the historical setting that gave CTHD a clear sense of reverence. Considering this, the fact that it was shot in New Zealand will be a troublesome detail for some viewers as well. Worse yet the dialogue sounds like the cheap sort, hastily written for made for TV movies or television shows. It isn't aided by the cultural disconnect that comes with the sorts of things they discuss and the English they use to discuss it.

When compared to the grandeur of the first film, this film feels extremely small and less ambitious. A fact that is reflected in the comparison of the distribution methods utilized to release the two films (but that’s the subject for a different piece). Though having said that, perhaps it's effective enough for a night home spent with Netflix, rather than a night on the town and a trip to the theater.