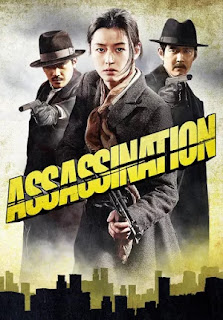 Set mostly during the 1930’s, this Korean action thriller deals in the 35 year period in which Japan held colonial rule over Korea. Japan had taken control over Korea, and proceeded to rule in such an oppressive way that in the late 30’s over 80 percent of Koreans were forced under a name-change ordinance to adopt Japanese names.

As you can imagine there was bad blood, and a resistance of sorts. The film follows this resistance, known as the Korean Independence Army. It begins by introducing the lead villains as pro-Japanese businessman Kang In-guk (Lee Geung-young) appeals to Kawaguchi Mamoru (Shim Cheol-jong), the Governor of the Japanese garrison in the area, for the rights to mine gold. But an assassin working for the Korean Independence Army breaks up the meeting attempting to kill Kawaguchi.

The assassin is Yeom Seok-jin (Lee Jung-jae), but he’s injured quickly and flees before completing the job. Later that night Kang In-guk finds out his own wife has been working with the Korean Independence Army as a spy and is helping the wounded assassin. But when she tries to leave for Manchuria with their twin daughters, Kang sends his men after her to kill her and bring back his daughters. His willingness to kill his own wife to keep his family in the good graces of the Japanese is just a sign of the treachery to come.

Years later, we find out Yoem was captured that night, but found freedom rather than death. Now he leads an operation for the Korean Independence Army that involves a jailbreak of three former Independence soldiers. There’s the sniper Ahn Ok-yun (Jun Ji-hyun), the machine gunner Chu Sang-ok (Cho Jin-woong) known better by his appropriate nickname "Big Gun,” and his cellmate, the explosives expert Hwang Deok-sam (Choi Deok-moon). Once freed they make plans to assassinate the Japanese governor and his vile Korean business partner.

However things become complicated when one of them turns out to be a traitor that has used their intel to gain a promotion within the Japanese army and hired two Korean bounty hunters to take the other three out. The bounty hunters are known by their nicknames “Hawaii Pistol” (Ha Jung-woo) and his sidekick “Old Man” (Oh Dal-su). Each of these characters sport a unique enough look that it’s pretty easy to tell them all apart, but none crosses the line into caricature, though “Old Man” comes very close. The obvious subtext here hints that these Korean bounty hunters may be easily swayed to work with the assassins if they don’t kill the targets first. Nevertheless watching the two sets of Korean killers converge is both exciting and tense.

We’re nearing spoiler territory so I’ll leave the plot description here. As you can tell by the number of characters and the complex line of action, things become borderline too complex. Director Choi Dong-hoon and his writing partner Lee Ki-cheol add a number of intriguing twists that keep the action from growing stagnant, but better yet, they keep things from going off the rails by grounding the characters in the historical setting at the heart of the film. They frequently tell of the horrors of the occupation and the things the Japanese army did to the people of Korea. The acts of the Korean Independence Army are considered justified in a similar way to Tarantino’s “Basterds” who spent their time killing Nazis in far more brutal ways than you'll find here.

“Assassination” never goes so over the top as to glorify its violence, but it does justify it by showing us characters that are evil rather than simply relying on our historical knowledge of the situation. The ongoing war for cultural dominance leads to many scenes in which Koreans demand other Koreans speak Korean rather than Japanese, and just as many scenes in which the Japanese force Koreans to speak Japanese. Moments like these give us just a glimpse of the situation between the two countries at the time. But there’s also a modern consciousness to make the female lead one of the strongest, if not the strongest, character on screen that feels timely for today’s audiences.

Yet there is a sense that some of the villains involved did what they did for what they thought was the right thing to do at the time, or perhaps better yet, the safest thing to do for themselves and their family. Choi Dong-hoon and Lee Ki-cheol’s script does a good job portraying a few of these villains as believable people caught up on the wrong side of things.

But in case you’re finding all of this a little too heavy, there is a clever sense of humor to the film that satisfies without becoming parody. At least two of the Korean Independence Army are nearly pure comic relief in the early going, but find ways to be nobly heroic later in the film. But there’s also a sense that the next day or any day after that could be the last for the band of Independence fighters. As such, there’s an added poignancy to an impromptu, but brief dance scene in a bar. It allows for a timely bit of light-heartedness. The kind of which the people facing these times would be lucky to have, and fools to pass up.

“Assassination” is something of an ode to Hollywood war epics that simply don’t get made anymore. The action is always well handled and feels like a mash up of Spielberg's WWII epics mixed with stylistic cues from Sergio Leone's more light-hearted Spaghetti Westerns. Cinematographer Kim Woo-hyung photographs everything in a golden color pallet that at times becomes very nearly sepia tone. Dong-hoon's direction is solid, but the story’s timeline and location swapping can get a little confusing at times. However, as long and perhaps overly complicated as it may be it never ceases to be engaging, and surprisingly affecting. It’s full of solid characterizations, and handles deaths with enough care that it rises above your typical action movie deathfest.