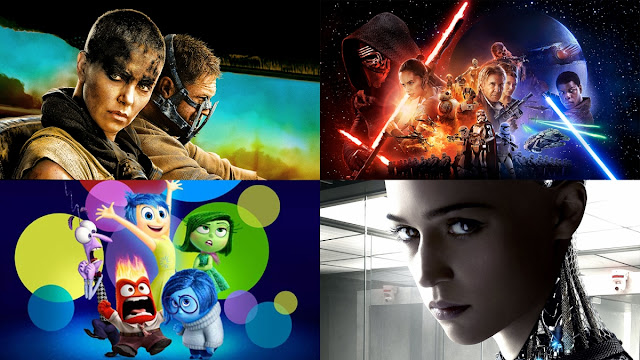 It's been an interesting year for film. Three of the top films of the year both in terms of general public appreciation and critic approval are up for a lot of awards. And surprisingly they're big budget blockbusters, and one of them is a pure action film. There's usually a disconnect between big budget action films and the people who vote for awards, but not this year. I'm referring to "Mad Mad: Fury Road," "The Martian," and "The Revenant." These films are genuinely very good and certainly deserving of the buzz they're receiving. Two of these are also comebacks of sorts for directors George Miller and Ridley Scott. Yet I'm still surprised to see such big budget films getting quite so much awards buzz. These types of films usually only see nods in the technical categories. And while I expect the Oscars to be a battle of at least two of these films for who will claim the most awards, I expect "Mad Max" to win the majority of the technical awards, and "The Revenant" to take home the more glamorous awards (like cinematography, best director, best actor, and possibly best picture).

2015 also saw a lot of impressive technical achievements from the practical effects of "Mad Max: Fury Road," to the incredible sequences shot in long takes in "The Revenant," to a film shot entirely in one take in "Victoria," to a film shot on an iPhone in "Tangerine" to a number of films made for IMAX like "Everest" and "The Walk," or even Tarantino's much touted 70mm roadshow production "The Hateful Eight."

I'm really not sure 2016 can live up to the year we've just had. I'll be pleasantly surprised if it does (I'm hoping for the best). But we are sure to remember 2015 as the year that brought us an incredible amount of great films.


10 Films I Regret Not Seeing:
There's always a handful of films I wanted to see, but never got around to seeing. Most are simply because they didn't get a VOD release, and their limited release never made it to my neck of the woods. Nevertheless I wish I'd had a chance to see these before putting together this list (and I still hope to catch in the near future):

Most Underseen, Undervalued Films of 2015:

Overrated Movies The Critics Liked That I Didn't: