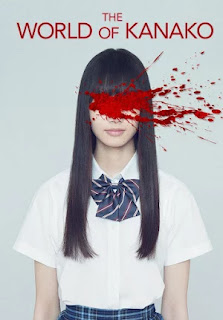 There’s an arthouse killfest hiding somewhere in “The World of Kanako.” It rears its head now and then, particularly toward the beginning of the film, then disappears to be replaced by a film that tries to take itself too seriously. The beginning of the film in particularly is a fast cutting, energetic, highly stylized open, that feels somewhat at odds with its slower paced, more somber, dramatic ending. It’s a film whose premise is far more interesting than what the filmmakers ultimately ended up doing with it. It follows Kanako’s former detective father as he attempts to find her after she goes missing. His investigation leads him to a criminal underworld and shocking details about a life he never knew she lived.

There’s a lamentable nihilistic worldview at the center of this film, and the people involved contain very few likable qualities. If film is a platform with which to identify and empathize with other relatable people who find themselves in extraordinary situations, it becomes increasingly hard to do so in a film such as this. Which is to say, that despite a strong performance from Kôji Yakusho, the father is very nearly as evil as the people of the underworld he finds himself surrounded by. Perhaps that’s an intentional reflection of the worldview held by the writer of the original novel this film is based on (Akio Fukamachi’s “Hateshinaki Kawaki”), but it doesn’t lend itself to a character with redeeming qualities.

It opens on a crime scene in which three men have been found murdered in a convenience store. Kanako’s aforementioned father Akikazu (Kôji Yakusho), happens to be one of the material witnesses in the case (a fact that seems to be dropped after this initial scene). As he searches for answers, and we struggle for clarity along with him, there’s a mix of uniquely edited flashbacks, exposition and world building that are as intriguing as they are confusing. They hold, as we might expect, images to be returned to later, supposedly after the film builds a full head of steam and fills in the gaps enough to make sense of them. The opening credits sequence that follows is a wonderful throwback to thrilling 70’s crime drama films and TV series. It adds an almost humorous layer of camp that simply vanishes the moment the credits end. As stylish as it is, it connects to nothing else in the film, except for the occasional blood splattered splash screen that feels almost like a callback to the “Bang” splash screens of the ultra campy 60’s “Batman” series.

The world Kanako (Nana Komatsu) lives in is slowly revealed to her former detective father as he searches for her. It’s one in which society has failed on every front. Gangs, drugs, bullying, and poor parentage has seeped into every establishment. From the police, to the schools, to the gang controlled underworld, everything is in chaos. And just how Kanako fits in, and where she is now is the mystery this film spends its runtime trying to solve. Along the way there are copious amounts of bloody deaths and twists and turns that implicate nearly everyone including Akikazu himself in the creation of this nightmare.

He goes to meet his ex-wife to discuss the whereabouts of their daughter who hasn’t been seen or heard from in a few days. A quick search of her room reveals a stash of drugs, that her mother can scarcely believe are hers. Akikazu, however, knows it means he shouldn’t get the police involved in the search for her. Both he and his ex-wife Kiriko (Asuka Kurosawa) know they were neglectful parents. He being a detective finds it natural to ask around about a missing person, but as Kanako’s father, he finds it strange that he’s forced to ask around in order to find out about her and who she really is.

The parallel line of action to Akikazu’s investigation is a series of dreamlike flashbacks to 3 years ago. We see a boy who is constantly bullied at school wondering about why it is he’s so unsuited to be a human being. But before he can drift too far away in deep thought about existence he’s granted a brief encounter with Kanako, who he clearly has a crush on. Over the course of the film, more of these flashbacks to school days reveal a budding friendship between Kanako, the popular girl everyone likes, and this lowly kid whose life is changed once she takes an interest in him. She watches out for him because he reminds her of her old friend Ogata, who committed suicide after too much bullying. As somber as all of this sounds, these flashbacks are set to upbeat music, bright sunshine and warm characterizations that entirely offset the expected mood. This more upbeat mood is a stark counterpoint to Akikazu's darker side of the action, and would be quite welcome if we didn't already suspect where it was going.

Akikazu is a broken down, but tough individual whose interest in finding his daughter seems entirely born out of familial duty. It’s in stark contrast to his treatment of her and his ex-wife. During his investigation he takes a beating. Many of his scenes end with him bleeding, and it becomes increasingly peculiar to watch him stumble around in public places wearing bloody clothes while starring vacantly with bruises all over his face, that is when he's not in a fit of rage. Yet it’s hard to say he doesn’t deserve it. He becomes something of a loathsome brute, particularly towards his ex-wife who he beats and forces himself on in an attempt to “prove his love” for her. He is as bad a person as the people he assumes are involved with the disappearance of Kanako. There are numerous flashbacks that inform us of Akikazu’s discovery of his wife’s infidelity, and his violent means of dealing with the man she was involved with.

These parallel lines of action cleverly inform crucial pieces of information about each other, as they should. They lead to the underground world of drugs, prostitution and murder that Kanako played a significant role in. But what’s hard to figure out is the motivations for many of the characters. Yet to explain why these motivations are difficult to understand would be to spoil too much of the story.

It isn’t that this film isn’t fairly clever in it’s editing that gives clues, but hides details until later. It isn’t that the film doesn’t feature some beautiful cinematography and the occasional bits of animation to add to the artistry. Yet this film wildly overplays its hand. What started as a uniquely put together, if over edited, mystery devolves into a wild, over-the-top, revenge film before trying to let the dust settle for some somber reflection. It goes far enough off the rails toward the end that characters start getting hit by cars, and shot while suffering repeated beatings, only to get back up and do more things to make us mad at them. The story continually tries to have its cake and eat it too by trying to balance camp, violence, and serious moral quandaries, but never elevates itself to a point where it earns it. The nihilistic worldview on display here is a grating one that is sure to wear on even the most cynical of viewers. When it comes down to it “The World of Kanako” is a lot of things, but subtle isn’t one of them. Perhaps it could benefited from doing a little less.

Posted by Zach Owens
Email ThisBlogThis!Share to TwitterShare to FacebookShare to Pinterest
Labels: 2.5, 2015, action, based on a novel, Japan, mystery, thriller