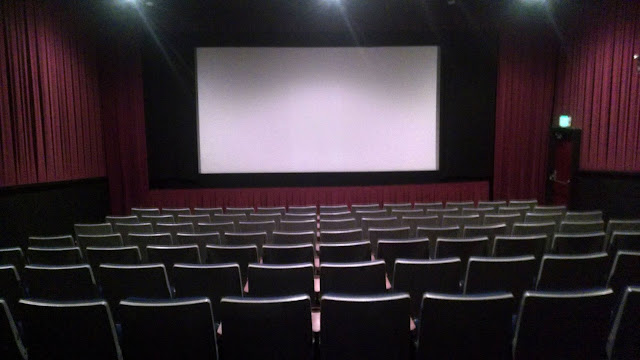 When it comes to home theaters, the tech has gotten pretty good. So good that some people might prefer the comfort of their own living room to that of their local multiplex. And let’s face it sometimes it’s just easier to sit on our couches and browse our Netflix queue or rent something to stream digitally. Here in the Midwest the winters are long and cold. As much as I may want to go see movies on the big screen, sometimes it’s hard to be motivated enough to put on pants and head out the door. But if we’re completely honest with ourselves, the theater experience makes a difference.

I’m not just talking about the screen size. You’re not likely to be able to fit a giant screen of equivalent size in your living room. And high quality surround sound systems cost more than most are willing to spend. Yet even if you have a super sized screen and an expensive sound system for your home theater setup, the theater has a bigger, better one.

Just to be fair, yes, there is something to be said for being able to pick your own movie start time, always have the best seat in the house, and pause as frequently as you need to use the restroom or refill your popcorn. However, it can feel like a significant tradeoff.

“Star Wars: The Force Awakens” is the latest film to confirm the joy of the theatrical experience. Going to see it on opening weekend was a big part of that as well. I’ve seen it twice, and the first time was by far the more enjoyable experience. And strangely enough that doesn’t simply come down to the fact that it was the first time I saw the film. Just how into the movie the opening weekend crowd was made all the difference. When BB-8 made his makeshift thumbs up, the crowd erupted with laughter. When the Millennium Falcon and eventually Han Solo and Chewbacca appeared on screen for the first time the crowd got very excited. It was fun to be apart of that crowd. The funny moments seemed more funny, and the nostalgic moments felt more awe inspiring.

The second viewing didn’t have the same energy. I’m willing to grant that a couple of weeks later, the lesser “Star Wars” fans were in attendance. Or more likely, a sizable portion of the audience had already seen the film, and those moments didn’t hit with the same surprise a second time. But that got me thinking about how different seeing a film in theaters on opening weekend with an audience changes the experience and ultimately our enjoyment of films.

An audience that’s really into the film can significantly increase our enjoyment of a film. If, for instance, you watch a comedy at home alone months after the film has left theaters, chances are you won’t crack up at every moment. If you saw the same movie in theaters on opening weekend with a crowd that was into it, that might be a bit different. And it never hurts to be able to be in on the conversation of a movie as it’s happening. These conversations tend to happen as a movie comes out, not months later.

There’s just something your new HD Vizio TV and sound system can’t deliver that a movie theater can. And when it comes down to it, it’s just more fun to watch movies with a crowd.

Just what I’ve been thinking about. That’s all for now...
Posted by Zach Owens
Email ThisBlogThis!Share to TwitterShare to FacebookShare to Pinterest