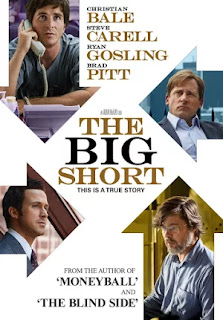 This film is, of course, based on a handful of people in the world of high-finance who were able to predict the housing collapse of the mid 2000’s. They chose to target the big banks, who are the real villains here, in order to make a fortune off their misfortune. As we know, the sad truth is that the victims are the people who lost homes and jobs and truly paid the price for this collapse. It’s because of this that no one feels like a hero in the end. McKay does a number of things to dress up the dry parts, but wisely chooses not to glamorize the ones that wound up finding some form of victory in all of this ugliness.

Comparisons can be made to the other notable ensemble piece based on true events from 2015. I’m referring, of course, to “Spotlight,” but these two feel like they weigh in on opposite sides of the scale. Where “Spotlight” does its best to downplay itself by giving subtle performances and keeping the stylistic flourishes to a minimum in order to stay out of the way of effectively telling its story, “The Big Short” does the exact opposite. It is entirely ostentatious both in terms of its performances and its story telling techniques. It features an extremely self aware documentary style with zoom ins, rack focuses, freeze frames, montages consisting of file footage, and characters speaking directly to the camera. It’s all in favor of effectively dressing up what would otherwise be an extremely dry script full of number crunching and information gathering.

It ends up being both a hilarious and surprisingly engaging film even if it never quite spoke my language. It’s all Greek to me. I couldn’t explain it back to you if I tried, but then again there’s a reason only a few people figured things out. McKay and screenwriting partner Charles Randolph do a noble job trying to translate the Michael Lewis’ book in a way that we can grasp, often by jokingly asking famous faces (playing themselves) to dumb the information down to some form we can grasp. Margot Robbie (in a bathtub), Anthony Bourdain (making food in his kitchen), and Selena Gomez (playing Blackjack at a casino) turn up playing themselves to try to dumb down the information being presented at different points throughout the film. I’m not sure whether to be offended by these segments or thankful that they tried to put it into terms I could understand. Yet I laughed at the prospect of saying, “don’t patronize me,” because I was both thankful for the explanation and cracked up by the method of delivering the information. Rarely is a film so full of convoluted information, yet so openly self aware that it almost doesn’t matter.

Yes the housing market collapsed. Yes big banks are to blame. Yes a few smart people made big money betting against them. But no one depicted here feels good about themselves for what took place. It is for the most part an explanation of it all. We are meant to be angry at banks for allowing this to happen, and somewhat grateful that at least a few people took advantage of these banks for their lack of foresight. Yet the tone alters so dramatically towards the end that it feels like it’s pandering purposely. We can get along with its pandering efforts for the sake of comedy to a point, but when it takes a serious dramatic turn the pandering feels a bit more pointed.

While Bale and Carell give the most ostentatious performances, Gosling gives the most calculated, and cool performance. They’re all strong, but they depend on whether they capture you from the start or not. Bale, in particular, plays a stuttering character whose glass eye has caused confidence issues from a young age, and he plays it up by avoiding eye contact in the majority of his scenes. For him it’s a juicy part with which he can sink his teeth into. Carell's Mark Baum is obnoxious. He can’t avoid speaking his mind in any and every situation. Often it’s when everyone he knows is telling him to be quiet, and the majority of those scenes end with him exiting the room to take a call. It’s a scene that plays out numerous times throughout the film. Now none of these things are particularly problematic, but they’re certain to get on some viewer’s nerves. They certainly diverge from the subtly effective performance given in “Spotlight.” Admittedly neither is the “right” method, but which you find more effective depends on what sort of viewer you are.

I’ve heard both sides of the argument, but for this viewer I found both Bale and Carell’s performances effective without taking offense to either. However I do find it curious that Bale’s performance is one setup to be a man lacking confidence, yet it's at odds with a man that goes to work in a ratty t-shirt, shorts and no shoes where he meets with men in suits. He’s smart and confident, even if he can’t look a man in the eye. I’m aware these characters are based on real people, but there’s something about these characterizations that feels at odds with themselves. Nevertheless there’s a wit to the dialogue and the technique utilized that it feels well worth the effort.

It makes sense what Adam McKay is trying to do here. He jokingly tells us the facts, and tries to make it understandable to the layperson. Then he shifts gears into a more serious mode that adds a poignancy to what really took place. The big banks criminally engaged in fraud, and the U.S. government saved them with a bail out at the expense of the little guy. “The Big Short” explains it to us, and lets us live vicariously through the people who took advantage of the situation. If you’re a little bit mad by the end, you’re supposed to be, and that proves that it’s an effective film.

Posted by Zach Owens
Email ThisBlogThis!Share to TwitterShare to FacebookShare to Pinterest
Labels: 2015, 4, based on a true story, biographical, drama