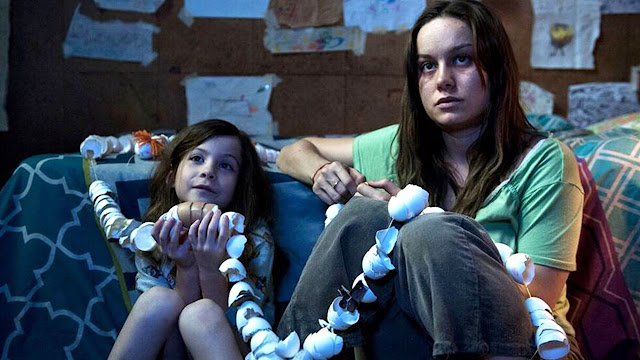 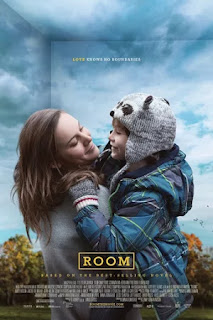 You’ll notice I haven’t included a trailer for this review. The purpose is simply that the experience of viewing this film will be a far greater one without much prior knowledge. Having not read the book and having tried to steer clear of trailers, I was never sure of the trajectory of this story. I cannot recommend highly enough that you take a similar approach to viewing this film. It allows for a genuine sense of discovery to each moment of the film, not unlike the pint sized protagonist whose perspective the film is told from. Having said that, if you haven’t seen the film, I urge you to stop reading here until you’ve had a chance to view the film for yourself.

“Room” is based on the novel by Emma Donoghue about a 5 year old boy who lives with his mother as captives in a small locked shed. The shed has been soundproofed, has heating and air conditioning, but is locked with a passcode that neither of them know. It begins with young Jack (Jacob Tremblay), with his long unkempt hair, waking up beside his mother, getting up to greet each piece of furniture in their small living space (a moment that has a powerful payoff later in the film). The first thing we notice is just how remarkable Jack’s upbeat nature is despite what we know to be an oppressive situation. He embodies pure innocence amidst unspeakable evil.

The first portion of the film is simply watching these two characters relate while building the tiny worldview that is all that Jack knows about the world. It plays on our base human emotions for the relationship between a parent and a child in a way that is extremely effective at building up to the film’s later emotional gut punches.

Jack remains curious about the world and ever protected from the truth of their situation by his mother Joy (Brie Larson), who hides him in a small wardrobe during the frequent nighttime visits from the mysterious man that brings them food. By this point we’ve figured out the dynamic at play. But his young mind can’t comprehend it. Director Lenny Abrahamson is particularly clever with his slow, careful revealing of details throughout this early portion of the film. The only thing Jack can see of the outside world is the sky shining down through the skylight. It reveals little, if anything about the world to him. In fact, he’s been told everything outside is outer space, and the only thing that exists is the room. Everything on their small television is images from other planets. Yet on his 5th birthday Joy chooses to tell him the truth about the world. Heartbreaking is Jack’s refusal to believe his mother’s new information, and his hatred of her attempts to hide him and send him away. Yet over time he adapts and finds a new curiosity about this world he’s never seen.


About the only scene that can be look on skeptically is the eventual, inevitable escape scene. It involves Jack leaping from a truck only to be chased and dragged by the man until a passerby involves himself more than would seemingly be appropriate if it were indeed a father taking control of a child acting out of line (which would likely be assumed). Nevertheless, the scene is shot and edited so well that it’s genuinely tense to the point where I was on the edge of my seat, and heard audible gasps and cheers from the other people during the showing I attended. It is an affecting moment, that leads to fear of what may come next.

Even after the escape, Jack innocently asks if he can go back to the room, as if unaware of what the place represents. It’s all he knew. It was his whole world for the first 4 years of his life. One of the most touching scenes is one in which he convinces Joy to take him back for a visit. Upon returning (with a police escort) he remarks on how small it seems now. I can’t help but wonder if there is a significance to the number of years spent there. It would seem, perhaps, an ever-so-slight commentary on life’s many rebirths. We go through years of schooling, notably the 4 years of high school, and 4 years of college. Each time we are something of a new person left to discover the new world ahead of us. A journey back to view the places our old lives were lived reveals a smaller world than we realized. This is echoed in a painful scene in which Joy shows Jack pictures of her old self, before her captivity. She looked like a normal teenager surrounded by her friends who she can still name one by one. She suffers quietly through the pain of the fact that she was robbed of a normal youth. Every moment spent back in her parent’s house is a grating reminder of what she lost, a life she can never reclaim. Even freedom doesn’t feel like freedom, especially with doctors, lawyers, reporters, and the general public’s ever present desire to speak with her.

We even see the affect her absence had on her parents, who are no longer together. Yet all the painful things the adults are forced to deal with are contrasted by Jack’s youthful excitement for a brand new world to discover. We find joy in a small moment in which he meets the first real dog he’s ever met. All of this grants a unique respect for the sacrifice his mother made to protect him fearlessly to allow him a chance at a normal life once they made their escape.

The film does a good job of casting a wide net in terms of dealing with the struggle these two and the family members that lost them go through. I won’t get into all of it, because some of these emotional beats need to be felt in the moment. But watching Jake discover the world for the first time is one of the high points in film in 2015. And it’s emotionally wrenching seeing Joy struggle to live again in the aftermath.

“Room” is without a doubt the most intensely emotionally affecting film I’ve seen from 2015. It’s packed with many moments that hit with emotional gut punches that are hard not to be affected by. It’s an honest analysis of the strength of the human spirit. Brie Larson continues to excel in emotionally rich indie films. Her 2013 turn as a supervising staff member of a group home for troubled teenagers in “Short Term 12” was one of the best films of that year, and her performance was criminally under recognized. Here she’s paired with young Jacob Tremblay, who despite being a tad old to be playing a 5 year old, is a revelation.

The scary thing about this film that inevitably adds to the emotional effect of it, is that these types of stories are really happening. Donoghue’s inspiration came from the true story of the Fritzl case, that came out in 2008 in Austria. The story involved a woman who had several children while being held captive over the course of 24 years. But as I was watching the film I was reminded of the much publicized Ariel Castro kidnapping case in Ohio. It involved the captivity of three young women for a period of around 10 years, until one of them was able to break out with her 6 year old daughter in 2013. “Room” explores, perhaps in less gruesome detail, what captivity for some of these cases is like, and the struggle to return to normalcy after they are freed. It’s one of 2015’s must see films.

Posted by Zach Owens
Email ThisBlogThis!Share to TwitterShare to FacebookShare to Pinterest
Labels: 2015, 5, based on a novel, drama, great performance