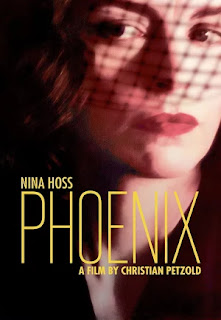 Few are the films that concentrate on Germany adjusting to life after the war. “Phoenix” depicts postwar Germany’s many homes and buildings left in rubble and families struggling to pick up the pieces and move on. It begins with a woman returning to her hometown after being released from a concentration camp to find that her former life has been destroyed beyond repair.

Nelly (Nina Hoss), a former cabaret singer, moves in with her closest friend and confidant Lene (Nina Kunzendorf) after learning that she is the last surviving member of her family. Despite Lene’s suggestion that they move forward by moving away from Germany for their own safety, Nelly quickly seeks out her old life. Her home has been destroyed, and her husband thinks she is dead. To make matters worse her face has been so badly injured that she requires facial reconstruction surgery that makes her not even recognize herself. One of the best shots in the film focuses on a broken mirror lying in the rubble of Nelly’s destroyed home. As she turns to see her reflection in the mirror she doesn’t recognize the face looking back at her.

Yet as the title suggests, she is a literal phoenix rising from the ashes. After her surgery she goes out of her way to find her husband Johnny (Ronald Zehrfeld) who happens to be working at a nightclub called “Phoenix.” He doesn’t recognize her, but there’s something in her eyes that makes him want to use her to pose as his wife. He can’t claim her belongings, which includes a sizable inheritance, because she isn’t there to sign for it. But if he can make someone look like her and sign a name like her, he could still claim his lost wife’s belongings.

As more of the backstory comes to light we learn that he was the one responsible for turning his Jewish wife over to the Germans, likely for his own freedom. She is clearly in denial throughout the film about what has happened to her and whether or not Johnny would betray her. She's in denial that she cannot reclaim the life she once had. Yet every glance in a mirror, every photo she holds dear, and every failed attempt to push herself on Johnny further indicates her loss. It’s difficult to fathom the pain of the betrayal Nelly endured. But just what drives her starts to be increasingly difficult to comprehend until the film’s final moment.

On the one hand it's easy to understand a person desperately trying to rebuild their life and reconnect with the person she loves most. Yet on the other hand we look on him with such contempt that we want her to seek vengeance rather than love. He unknowingly grants her an opening to climb her way back into his life. And even if it's for selfish reasons, he does his part to make her resemble her old self again. In fact one of the most lingering moments in the film is when she first goes to the "Phoenix" club and calls out Johnny's name. He pauses for a second, but dismisses it as mistaken identity. He doesn't even go by that name anymore, and he's certain his wife no longer exists. We can't be sure whether or not there is a hint of recognition there. For Nelly this is the moment she truly feels like a ghost. He looks right through her and walks away without acknowledging her. This moment is paid off later on in the film as Johnny returns home to find Nelly, as he requested, dressed in her old clothes, her hair died and her makeup on. He stops in his tracks and stares in near disbelief. She almost looks too much like Nelly to not really be her. This is the moment she so badly wanted in the first place, but by now he's already forced himself to believe that she isn't real. Both Nina Hoss and Ronald Zehrfeld sell these moments extremely well. In fact their performances, Nina Hoss' in particular, are spectacular.

The screenplay by Christian Petzold and Harun Farocki (based on the novel by Hubert Monteilhet) spends far too little time concentrating on Nelly's friend Lene struggling to see her family and friends having fallen apart. Lene wants Nelly to go away with her and use her inheritance to build a safe community for Jews. Their lives are destroyed, their homes no longer exist. For her Germany has little left to offer. In one scene she talks about how she can’t even stand to listen to German songs anymore. It’s clear that she feels a sense of betrayal in the fact that Nelly chooses to pursue her old life rather than find a new one with her. As fascinating as her struggle is, Petzold doesn’t give her subplot its due justice, and it causes an important moment later in the film to fall more flat than it should have.

Maybe the best way to describe “Phoenix” is to say it’s “Vertigo” with the shoe on the other foot. Both feature stories about people who have been betrayed and can’t get over what’s been lost, as well as one character trying to reshape another character into what they lost. But the significant difference, and the main reason “Phoenix” doesn’t hit with the same impact “Vertigo” does is that the emotion here is entirely one sided. Johnny’s selfish nature had him turn Nelly over to the Germans, and use a woman, who he supposedly doesn't know, for financial gain. Rather than mourn the loss of his wife he immediately contrives a plan to pick her pockets. Even if the film, as emotionally wrought as it is, doesn’t carry the emotional weight as “Vertigo,” the fact that Johnny is such a selfish weasel makes the film’s final moment so satisfying even if it doesn't grant resolution. The moment their charade becomes reality is among the finest moments put on screen in 2015.

Posted by Zach Owens
Email ThisBlogThis!Share to TwitterShare to FacebookShare to Pinterest
Labels: 2015, 4, based on a novel, drama, period piece