Most Anticipated Films of 2016

Ip Man, the martial arts master of Wing Chung and teacher to the legendary Bruce Lee, has been subject of many films. Perhaps none of them have been better than the series starring Donnie Yen. The first two Ip Man films are well made martial arts films that have been critically well received. And the third, and likely final, film in the series will concentrate on Ip Man's time teaching a young Bruce Lee while defending their city from a group of brutal gangsters.

It's the latest Coen brothers film, which automatically puts it pretty high on the list of anticipated films for most cinephiles. People, myself included, love a good film about filmmaking. And this one is set during Hollywood's golden age. It stars Josh Brolin, George Clooney, Scarlett Johansson, Ralph Fiennes, Tilda Swinton, Jonah Hill, and Channing Tatum. With that cast it's hard not to be excited.

Everyone remembers the hilarious scene that was screened as a trailer before "Star Wars: The Force Awakens." It's the latest from Walt Disney Animation Studios, who have been doing extremely well in the last few years with titles like "Wreck-it Ralph," "Frozen," and "Big Hero 6." Plus it has a strong cast including Jason Bateman, Ginnifer Goodwin, Idris Elba, J.K. Simmons, Alan Tudyk and Jenny Slate.


I've been a fan of Jeff Nichols previous films "Take Shelter" and "Mud." Here he goes into near comic book territory by making a film about a boy with special powers forced to go on the run with his father. It has been a while since Nichols' last film, so I hope it was worth the wait. But considering his track record there's a good chance it will be. Also the cast is a good one. It features Michael Shannon, Adam Driver, Kirsten Dunst and Joel Edgerton.


Everybody Wants Some (April 15)

The next film from Richard Linklater is an 80's version of his beloved 1993 film "Dazed and Confused." Where that film followed high school and junior high students on the last day of school in the 70's, "Everybody Wants Some" will follow a group of college students adjusting to unsupervised adulthood. As a big fan of Linklater and "Dazed and Confused," and a fan of the 80's in general, I'm pretty excited to see what Linklater does here.

I've generally been a fan of most of the Marvel hero flicks. Even when they are flawed, they're always pretty entertaining, and that's what we want out of a summer blockbuster. The Marvel films coming out the first week of May have become the traditional kickoff to the summer movie season. Naturally they're becoming annually anticipated, and "Civil War" is no different. The Russo brothers are back to direct after their critically acclaimed work on "Captain America: The Winter Soldier."

I'm not sure what to think about a reboot of "Ghostbuster," but the fact that it's an all female cast shouldn't factor into the conversation. I love the original and I'm hopeful Paul Feig and this cast of Melissa McCarthy and SNL regulars Kate McKinnon, Leslie Jones, Kristen Wiig can deliver on a fun, comedic film.

While studying in LA my class got to have a Q/A session with director Scott Derrickson. He's a nice guy who doesn't mind chatting and telling stories with students of film. The fact that he's one of the few directors I've met, makes me excited to see another big budget film from him. He's known for his horror films rather than his big budget remake of the classic "The Day the Earth Stood Still." Yet this film, being apart of the Marvel Cinematic Universe with all the resources that goes with it, has a much better chance than his maligned remake ever did. Benedict Cumberbatch is one of the more sought after male actors at the moment, and Rachel McAdams, Tilda Swinton and Mads Mikkelsen get to make their MCU debut.

Fantastic Beasts and Where to Find Them (Nov. 18)

Harry Potter fans are rejoicing over J.K. Rowling's return to her wizarding world. This time the setting has moved from England to America and long before the events of the Harry Potter series. This time around rather than a lot of no name child actors, there's some semblance of star power with Oscar winning actor Eddie Redmayne taking on the lead role.

As a big fan of Chinese director Zhang Yimou I look forward to all of his films, but this one looks legitimately exciting. It's a mystery/thriller centered around the construction of the Great Wall of China. It stars Matt Damon, Willem Dafoe, Pedro Pascal (of "Game of Thrones" fame) and Andy Lau. I like the idea of well known American Actors and well known Chinese actors (and director) coming together to work on a project. Fun fact, Andy Lau played Inspector Lau Kin Ming in the "Infernal Affairs" series of movies that were later remade by Martin Scorsese in America with Matt Damon playing Colin Sullivan, who is of course the American version of Andy Lau's character. 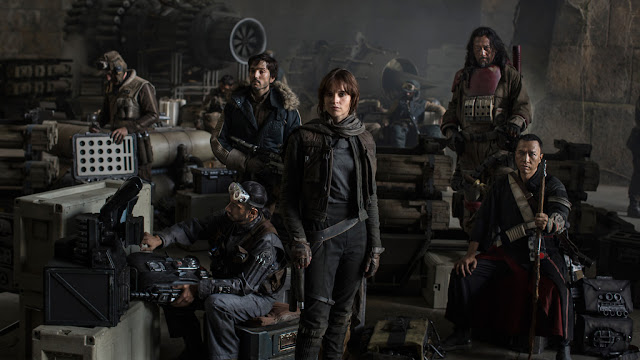 Star Wars is back and expanding its universe on film rather than just in other forms of media. These other Star Wars stories will trade off years with the main series of films that revolve around Daisy Riddley's character. The short description of "Rogue One" reads, "Rebels set out on a mission to steal the plans for the Death Star." Which indicates that it takes place before Episode 4, and it may end with a ship being captured by a star destroyer and Leia hiding the plans in R2D2. But if the secrecy that surrounded "The Force Awakens" is a sign of things to come, we can expect to not find out too many details ahead of the film's release at the end of the year. It stars Felicity Jones, Mads Mikkelsen, Alan Tudyk, Ben Mendelsohn, Donnie Yen, Diego Luna and Forest Whitaker.