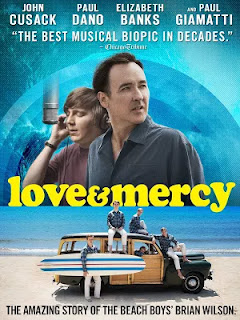 
As someone who didn't know much about Brian Wilson or The Beach Boys, outside of enjoying their music from time to time, "Love & Mercy" was surprisingly moving and informative. Maybe the impact would be lessened by having previous knowledge of the situation, though I suspect there's enough here to move even the most knowledgeable of fans.

The two lines of action here cross cut Wilson's life at two significant turning points. The first shows his work on the band's experimental 1966 album Pet Sounds while his drug problem contributed to a deteriorating mental state and tension within the band. It was the beginning of a dark period in his life. The second line of action is the resolution of that period brought on by the relationship that formed between Wilson and his eventual wife Melinda Ledbetter in the late 1980's.

It's painful to watch young Brian Wilson (Paul Dano; referred to as "Past Brian") being abused and unappreciated by his father (also his manager), and to realize that it continued in another form later in his life by another oppressive father figure in therapist Dr. Eugene Landy (Paul Giamatti). Giamatti plays him friendly at first, but over the course of the film he devolves into a rattle snake coiled tightly around 1980's Brian (John Cusack; referred to as "Future Brian"). Landy can feel his control of the situation gradually slipping away the more time he sees Brian spend with Melinda. And Melinda finds that's done some seriously shady things to maintain his control over Brian.

"I don't want to be one more person who wants something from Brian," Melinda (Elisabeth Banks) says of her relationship with him. It's a heartbreaking admission from one of the few people in his life who actually cares for him and wants something other than a piece of his success. Yet it's the way their relationship is slowly built and the revelations Past Brian's line of action has on our understanding of Future Brian that grants a sense of empathy.

There's a great shot at a restaurant where Future Brian sits chatting with Melinda. The camera rests on her but behind her, his face is reflected in a glassy plane that seems to split his head in several directions. It's a perfect reflection of a man whose mind is constantly going in several different directions at once. It's a clever bit of visual storytelling from Pohland and cinematographer Robert Yeoman (a frequent Wes Anderson collaborator). Many of the earlier montages of time spent in the 1960's were filmed with handheld 16mm cameras to give them a documentary feel. Yeoman is a talented cinematographer who doesn't get enough recognition. His work here is excellent.

As far as the performances go, Pohland curiously didn't have Cusack and Dano interact during filming. He wanted them to come to their own understanding of Wilson. While Cusack gives an effective performance, the standout is Dano. They each get their share of screen time, but Past Brian's part is essential to carrying the emotional weight of the film. Miraculously Cusack's performance feels like a natural progression anyway.

There's something to be said for the clever way Pohland and screenwriters Oren Moverman and Michael Alan Lerner start with past Brian in a strong state of mind contrasted with future Brian lost in his memories and suffering from a drug addled state, and then proceed to move them in opposite directions so that one ends where the other begins. Both past and future have revelations to inform our experience with the other. And it all leads to a magnificent montage late in the film that is truly one of the best I've seen in ages.

What's so surprising is just how mesmerizing this unique take on the biopic is. Without doubt this film will grant a deeper appreciation for the music Brian Wilson created. As depressing as it can be, it never ceases to be engaging. As challenging as the story may be, it's impossible to look away. The dual performances are not just great individually they work together in a way that creates a believable whole.