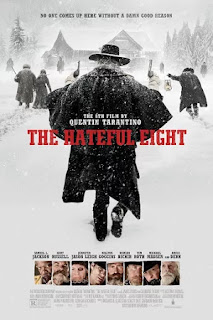 Quentin Tarantino’s eighth film is both a celebration of the medium of film itself and a failure to create a compelling story. It’s about a “hateful” group of people, 10 by my count despite the title’s count of 8, that find themselves taking refuge together in a haberdashery while a blizzard rages outside.

Set just after the Civil War, It opens with John Ruth (Kurt Russell) riding in a carriage with his villainous captive Daisy Domergue (Jennifer Jason Leigh). He keeps her handcuffed to his arm and intends to take her to Red Rock to be hanged. Despite their rush to beat the blizzard that seems to be chasing them, Ruth’s driver O.B. Jackson (James Parks) stops to pick up two more people along the way. The first is Major Marquis Warren (Samuel L. Jackson), a bounty hunter hoping to transport 3 wanted dead bodies to Red Rock where he can receive payment. The second is Chris Mannix (Walton Goggins) formerly a military man for the South in the Civil War and soon to be the new sheriff of Red Rock.

Upon arriving at the haberdashery where they intend to wait out the storm, it’s obvious to at least one of them that the situation is off. The owners and employees of the haberdashery are mysteriously absent, and in their place are three strangers. The first is a Mexican man who goes by the name of Bob (Demián Bichir). He claims to be the person left in charge on the haberdashery while the owners Minnie and Sweet Dave are away visiting family. The remaining “hateful” characters are the aging southern General Sandy Smithers (Bruce Dern), the suspiciously quiet Joe Gage (Michael Madsen), and Oswaldo Mobray (Tim Roth), the humorously accented man claiming to be Red Rock’s hangman. Roth is playing the role we might have expected to see Christoph Waltz play had he been available to work in this film. The rest of the film is a matter of working out why the situation is what it is. Who is really who they say they are, and who, if anyone, is there to help Daisy.

You’ll undoubtedly notice the opening credits assuring that a few more recognizable faces are in this film that I didn’t mention yet. But it should be mentioned there is an eventual flashback in which more people appear.

Jackson’s character serves as a near Columbo-esque detective trying to work out the mystery of how their current situation came to be and how all the people in the room came to be apart of it. And like Colombo we get the sense that he has it figured out the moment he walks in the door. The rest of the time he spends letting the charade continue hoping the people involved will make a mistake.

It plays like a western stage play version of “Reservoir Dogs.” But this time around the western, post civil war setting allows for more angry brutish characters being even less pleasant. Troubling is Tarantino’s cavalier overuse of the n-word. He wields it regularly in attempt to shock or for the explicit purpose of angering the audience into rooting for the Warren character. And root for him we do, but Tarantino does his best to make us regret it by making him just as nasty as the men around him. We get it. This rough old time was unpleasant, but Tarantino fails to allow any of the characters to rise above the evil that makes everyone and everything so ugly. It seems to purposely, even proudly, live in this amoral world.

At one point Warren tells a story of oral rape that we’re lead to believe is a lie meant merely to provoke another character, but Tarantino needlessly visualizes it purely for shock value. It’s all a bit much, and confuses the point of whether or not it’s a lie. The dialogue that features an over use of description of the act comes off as petty and immature rather achieving the sense of justified vengeance that it clearly aspired to.

Nevertheless, this scene is an example of the way Tarantino attempts to use verbal stories in this film. In a similar way that "Inglorious Basterds" is a reflection on the power of cinema, "The Hateful Eight" makes a point of expressing the power of story. Stories whether true or not have a powerful effect. Many characters tell stories to get what they want or introduce other characters by telling the stories they’ve heard about them. Without getting into specifics about the stories themselves, they are used throughout the film to either disarm or provoke.

“The Hateful Eight” feels very much like an extension of the classic Tarantino style. “Inglorious Basterds” began with what is likely the best scene he ever directed. Without too much exposition we’re introduced smoothly into the world of the film. It slowly, carefully establishes mood and context in a tense scene that properly set the stage for the rest of the film. Throughout his career, his filmography is full of scenes in which there’s a group of people sitting around talking. Few writers/directors can make such a scene so compelling. He fills it with pop culture references and as the tension rises eventually bullets fly and blood spurts. It is a type of scene he has mastered many times over, and his imitators haven’t and won’t stop trying to copy this Tarantino trademark scene. “The Hateful Eight” is that scene, but spread across a nearly three hour runtime.

However, as you might expect drawing out that moment causes it to lose impact. You can only hold the tension for so long. As such, this film feels like it's straining. Especially noticeable are the little clues dropped in the first act of the film, like a jelly bean found on the floor among other clues around the room, that don't get paid off until a lengthy time later in the third act. This all goes without mentioning the clues we aren't made aware of. These are clues that are pulled out of thin air by a character that knows more than he's letting on, but for whatever reason refuses to divulge until the climax. And despite some early bad blood between two of the characters, an unlikely partnership forms due to happenstance late in the film that lands without its intended punch due to the time it takes for things to develop and the fact that very little happens between them in the middle portion of the film.

Tarantino’s last few films have focused on righting the wrongs of history. “Basterds” saw a group of Jewish soldiers killing Hitler and the Nazis. “Django Unchained” saw a freed slave striking back against an oppressive plantation owner. “The Hateful Eight” tries to do the same as “Django” but in a far more compact way. “The Hateful Eight” has essentially two primary storylines. The first is John Ruth’s journey to claim a bounty on Daisy Domergue despite a potential spy for her side being in their midst. The second develops later on in the film as certain details come to light, but it involves Major Marquis Warren’s quest for vengeance. Yet Tarantino is so busy trying to build tension between these people by having them get into arguments involving an overuse of the n-word (the desired shock value is worn out fast), that he fails to establish any of his characters.

The advertising and Tarantino himself have talked up the fact that this film was shot on 70mm, and the few lucky locations that received his 70mm roadshow version got to take advantage of the larger format. But the fact that the majority of it plays out like a stage play in the claustrophobic space of one location seems a bit at odds with the grandeur of the larger film format used here. Nevertheless critics are focusing more on the treatment of the lone female character in the film rather than Tarantino’s shooting methods. She arrives bruised and blackeyed, and proceeds to be hit in the face repeatedly throughout the film. In fact there comes a point in which she just stops trying to wipe the blood off her face at all.

It becomes all too easy to point out why the film comes off as sexist. Yet despite the male characters gleefully mistreating the only female character in the film, Tarantino has stated that these actions are meant to cause anger and hatred of the characters mistreating her. And it might have worked if Tarantino bothered trying to make her a sympathetic character. However she is supposedly the most “hateful” of all of them. She is a dreadful prisoner who has done unspeakable evil, so unspeakable, in fact, that Tarantino fails to establish it at all. And therein lies another problem. While we can sympathize with a group of Jews enacting revenge against Hitler and the Nazi party, or a freed slave against a ruthless plantation owner, we have no reason to sympathize with her or anyone fighting for or against her.

This is Tarantino at his most confident, doing exactly what he wants the way he wants. Which means not caring about whether any of the characters are likable or how long and bloated this film becomes. Had this film been made by someone with a lesser name, an editor would have shaved off at least 40 minutes to produce a tighter film. This film is sure to tax the patience of even the most patient viewer. Tarantino spends a large portion of his bloated runtime making us angry and distrustful of the racist, sexist male characters of the film as a means of justifying the gory deaths of a number of them, but he fails to establish Daisy as anything more than an uncouth captive.

When it really comes down to it, this film is nearly 3 hours of not very likable people doing not very likable things while failing to accomplish most of their goals. The excuse that the word “hateful” is in the title doesn’t justify the fact there’s little reason to care about any of these unlikable characters. Rarely, if ever, do these qualities lead to a good or enjoyable film. As well written and performed the dialogue is, it's a long, hard film to slog through. Where the tale of vengeance in “Inglorious Basterds” granted a sense of justice and catharsis, neither can be found in "The Hateful Eight."