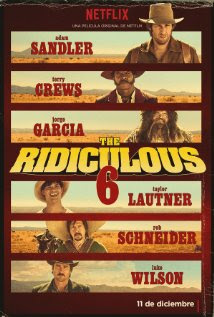 Considering Adam Sandler’s slide from funny comedian to a filmmaker often ridiculed for his ridiculous comedies it seems strange that Netflix would offer him a deal to make 4 movies for them. The first has been called something of a passion project for Sandler, yet it feels more like a loosely connected series of western themed SNL sketches that Sandler took at random from his book of unused bits. This move from Netflix comes at more of a shock due to their tendency to produce highly regarded, critically lauded content of their own.

This first outing with Sandler is not up to their usual standard. If the final product wasn’t racist and misogynistic for its viewers, Sandler even found a way to offend the people on set with him. At least a dozen Native American extras left the set during shooting. Sandler passed it off as a misunderstanding, yet he seems to be having a similar misunderstanding with viewers of his films. If anything his films have become the sort of thing you put on in the background when you just need to shut your brain off for an evening. And while that may be fine for some viewers, it can’t be the sort of thing a true filmmaker aspires to. Yet in that sense it might just be exactly the sort of film that works on a platform such as Netflix. I say that in terms of views, not in terms of its success as a film.

It begins with Sandler playing the part of White Knife, a not so creative name that indicates that he’s a white man living among Indians with an unusually strong ability with knives. He lives among his Indian brethren, surprised to find that a white man would approach their living space. The white man is an aging man by the name of Frank Stockburn (Nick Nolte) and he claims to be White Knife’s father. But as we’ll find out, Stockburn had a number of lovers and White Knife spends the majority of the film bumping into them at random. What convinces them to band together is the fact that their father is captured by his former gang for having stolen $50,000 from them.

It then falls to White Knife and his collection of half-brothers to earn the $50,000 in order to pay off the gang and set their father free. The finding of each of the newfound brothers feels more and more unlikely than the last. There’s Ramon (Rob Schneider doing a ridiculous Hispanic caricature), Lil’ Pete (Taylor Lautner), Herm (Jorge Garcia), Chico (Terry Crews), and Danny (Luke Wilson). Ramon is a half Mexican man with a buro. Lil’ Pete is the town idiot among a town of idiots. Herm is a mute who can understand English and even write a little bit, even if he can’t speak it himself. He communicates via grunts and some unrecognizable form of sign language. Chico is a piano player whose main comedic bit is that he doesn’t know people recognize him as a black man. And Danny is a former secret service agent who failed to protect Abe Lincoln. He feels a significant amount of shame about it, and is strangely enough in need of his father’s approval. Nevermind that his bit is one that is in no way satisfyingly concluded. Nevertheless, together they form the self titled ridiculous 6.

Once they’re together, they start robbing from supposedly evil rich people in order to save their father. It's as if they’ve formed some new take on Robin Hood and his merry men, yet these characters are far dumber than any who have taken part in a Robin Hood story. Worse yet, we're left to ponder how the gang could snatch Frank and head to a singing windmill while White Knife assembles his brothers to rob banks, and get sidetracked by all sorts of random nonsense, yet they all meet up at the windmill at the same time. To say that even the base storyline is utter nonsense is an understatement.

There’s a line between being true to the injustice of the old times being portrayed and poor attempts at humor that come off as racist, and this film continually crosses it. It isn’t just that the people of this old western town continually speak ill of the Indians, but at least a few of the Indians are played by actors doing an extremely false accent (including Sandler). Yet their names are the more offensive part. White Knife’s soon to be wife is named Smoking Fox (Julia Jones). Her friends are named, Beaver Breath and Never Wears Bra. These aren’t just unimaginative names, they’re borderline offensive to women and to Native Americans. It’s the kind of jokes that comes off as ignorant, uncultured, and often in bad taste.

Yet that’s the sense of humor “The Ridiculous 6” is going for. Ramon’s sidekick burro has a unique bowel problem that allows the animal to spray his excrement across a room on command. Lil’ Pete constantly wonders about his third nipple, and thinks moms poop out their babies. Each line is delivered with a horrendously over-the-top dumb voice, and his trademark saying “gall darn!” is an unfunny bit they return to repeatedly throughout the film. The script continually takes the approach that if a bit wasn’t funny the first time, perhaps it will get more funny through repetition. They do not.

And sadly, that isn’t even the worst of it. The film tries to have fun fictionalizing historical figures and events. Aside from attempting to explain how Lincoln was assassinated, other figures include General Custer, Wyatt Earp and Mark Twain. Custer is played by a very bored David Spade, and Earp is played by Blake Shelton who seems surprised that someone offered to pay him for the role. Twain is played by Vanilla Ice. Yes, you read that right. Vanilla Ice tries to modernize the script with his typical jive but feels entirely out of place. It isn’t just that Mark Twain doesn’t really belong with the characters on screen, it’s that Vanilla Ice’s portrayal feels completely out of left field.

Speaking of baseball references, the film takes a fairly lengthy detour to have the 6 travelers participate in the establishing of the game of baseball. It might have made for a funny SNL sketch, but it does little for the story here. The longer the film goes on, the more random these scenes feel. None of them flow together in any meaningful way, but the baseball sketch is easily the most disconnected of the bunch.

Perhaps the biggest surprise of all is just how bad Sandler’s performance is. He can’t muster the effort, even during action sequences to look as though he cared about what was happening. It’s about as tired a performance as I’ve ever seen. He delivers lines in a low growl and a horrendous accent that comes and goes. He also maintains a straight face throughout the entire film. His character was raised by Apaches to be some kind of superhuman action figure capable of anything. He’s the too serious character here, which seems an odd choice considering that Sandler built his career playing the comically stupid character. Now he’s the bored action star surrounded by stupid, incompetent people.

When it comes down to it, even when the film isn’t being racist, this film has a juvenile sense of humor, whether it’s the burro’s continuous bowel movements, a gang whose schtick is to pluck out their right eyeball, or the doctor (played by Steve Buscemi) who repeatedly rubs a balm on his patient’s faces, and in their mouths after having put his hand in some disgusting places. And just as it starts to feel like the film is becoming aware that it isn’t making its audience laugh, it comes up with bizarre scenes for the characters to sit around a campfire or jump in a pond together laughing hysterically. It’s as if to say, If it isn’t making anyone else laugh, at least they made themselves laugh.

Netflix should be embarrassed that they put money into this travesty. And they should certainly be worried about where their money is going in the future with Sandler’s next 3 films. They remain committed to creating high quality television shows, but it’s clear that they care less about their film content. That’s a shame, and one that isn’t likely to change so long as they continue to throw money at filmmakers like Adam Sandler.