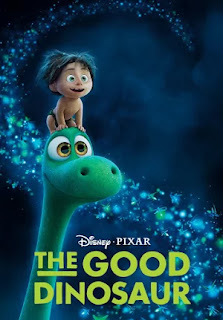 
Pixar’s mastery of the animated feature has lead them to financial success with the vast majority of their releases. Many of their best films specialize in the journey home. After some sort of disaster separates them from their friends or family they find themselves on a desperate journey to return home. Through that journey they discover courage, new friendships and learn valuable, necessary life lessons. “The Good Dinosaur” follows suit, but doesn’t do so as imaginatively as other similar Pixar films.

That isn’t to say it isn’t imaginative at all. In fact, there are a large number of small bits that feel like the sort of thing that have been taking up space on a drawing board somewhere in Pixar’s offices just waiting to be made into a short. Yet their inclusion here feel at times out of place, and at others completely bizarre. The most notable is the brief moment when Arlo, the main character, and his travelling buddy Spot, a feral human, stumble upon a few rotting pieces of fruit. In their hungry state, they gobble them up without question, only to find that it makes them feel strange. It leads to a short drug addled dream sequence that’s not nearly as long or purposeful as the one found in “Dumbo.” It is hilarious, but I’m glad I’m not the one responsible for explaining hallucinogenic drugs to the kids in the room. Just as quickly and strangely as the scene comes about it exits without purpose. Pixar packed “The Good Dinosaur” with such moments, yet eventually they stop being cute and start feeling like filler meant to pad an already short runtime.

It begins with the birth of three baby apatosaurus, the smallest (who had been housed in the largest of the three eggs ironically) and most timid of the three is Arlo. Buck is the big tough guy, and Libby is the sneakiest, most mischievous one. Their father makes it clear to them that they need to earn their place in the family. He isn’t mean about it, in fact he’s lovably patient and caring. Nevertheless he does make his mark on a tower of stone built on their farm. He places his footprint on it as does the children’s mother, but dad makes it clear that they must earn the right to place their own mark. Buck and Libby do so very quickly. The timid Arlo, on the other hand, has a hard time mustering the courage to face his duties which typically involve working with the various farm animals they own (most of which frighten him terribly).

As such the most challenging task his father could ask of him would be to capture a pest that’s been stealing their food reserves. He would kill the pest if he wasn’t so scared of coming into contact with it. That pest turns out to be the dog-like, feral human, who responds to the name Spot. Even after capturing him, Arlo can’t bring himself to kill the human. This of course disappoints Arlo’s father, and leads to a disastrous series of events that involves a violent storm and a raging river. It also finds Arlo separated by many miles from his home. Lost, alone and hungry even a nuisance such as Spot turns out to be a welcome sight. Spot clearly feels a sense of responsibility to Arlo after Arlo set him free. The rest of the film is the forming of their unlikely friendship as they journey home.

Initially there are numerous sight gags (other than the aforementioned one) as they learn to enjoy each other’s company. Most of which are in the vein of Pixar’s best silent movie-esque moments. One finds Arlo attempting and failing to build a makeshift shelter out of a handful of branches. Another has Spot attempting to make peace with Arlo by bringing him food, even if Arlo has trouble catching on till Spot finally brings him something appetizing. As entertaining as these moments are, they pale in comparison to the touching moment in which Arlo and Spot bond by using a form of sign language to explain that they’ve lost family and miss them. This moment gets an even more touching payoff later in the film as well. They are the closest thing to friends they’ve ever had, and as close a thing to family they have while still out on their journey.

As the film's advertising makes abundantly clear, it's based on the idea that the meteor that killed the dinosaurs missed Earth. Thus it’s dinosaurs that rule, and serve as stewards of Earth. They farm for food, and own herds of cattle. In fact, there’s a sizable portion of the film that feels like a Western complete with a group of ranchers telling stories around a campfire set to mournful harmonica tunes. It finds Arlo and Spot in the company of a family of T-Rex that need Arlo’s help tracking down their herd of longhorns. Yet this leads me to the surprising mixture of humanized dinosaurs and scary carnivorous ones that pop up whenever the script needs to put Arlo and Spot in danger. Rarely does it make sense why some creatures are friendly and others are not.

Nevertheless the clever concept here is rather than a human and his faithful pet, the human is the faithful pet and dinosaurs are masters of the world. There is also a clever bit of foreshadowing when young Arlo, in a fit of terror, retreats from a creature only to have his father stop him just before falling into the nearby river. He does, nevertheless, fall into the river later on in the event that forces him away from his home.

The problem is that this story has been done so many times, even by previous Pixar films, that it’s easy to compare it to the films it borrows so heavily from. In fact, it’s not too dissimilar from Pixar’s earlier 2015 film “Inside Out.” Both involve a pair of unlikely companions on a journey back to their home after a disaster forces them far away. Even if the setting and the stakes are different, the basic storyline is all too similar. But “The Good Dinosaur” borrows from other Disney efforts as well (“The Lion King,” and “Jungle Book” come to mind). Once you start comparing “The Good Dinosaur” with the films that came before it, it quickly starts feeling like an unoriginal amalgamation of films that have done this sort of story better. As cutesy as they may be, Arlo and Spot simply aren’t as interesting as other Pixar characters, and their world not as inspired, or as well fleshed out.

Yet, lest it feel like I’m writing them off entirely, Pixar, as they do, find some clever ways to work in homages to classic films. Aside from the aforementioned classic western vibe, the setting allows for a kid friendly “Jurassic Park” of sorts. One sequence even features a trio of T-Rex fighting a pack of feathered Velociraptors. The sequence might have been a tad scary for its intended audience if not for goofy faces and humorous voice performances. Although the scariest scene might just be one involving a very clever use of clouds and pterodactyls to reproduce an upside down version of “Jaws.”

Pixar’s animated environments have never looked so beautiful. It might, for some, seem like an odd disconnect to see these near photo-realistic landscapes populated by increasingly cartoony creatures. Nevertheless, those beautiful vistas are some of the most beautiful images Pixar ever rendered. The shame is in the fact that this uneven piece of filmmaking as a whole feels less than worthy of the Pixar brand. Production for this film was setback a number of times including rewrites, and a change in director and most of the primary voice cast. This much trouble behind the scenes rarely leads to good things for the final product. Considering this, it comes as no surprise that this film feels disappointingly lacking by comparison to the rest of their filmography. It’s just missing that special something that managed to put their previous efforts over the top. Worse yet, it comes out the same year as one of their best films in recent years. It’s already being overshadowed by “Inside Out” and that will only continue come awards season.