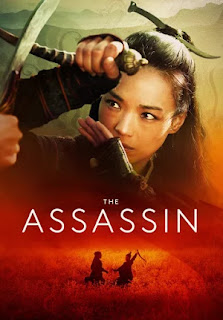 Hou Hsiao-Hsien is a filmmaker who has been critically acclaimed for years and is slowly gaining more recognition in the west. Having failed to catch up with his previous works before this film, I find myself experiencing his style fresh with “The Assassin.” Whether that helped or hurt, I can’t say with any certainty. Initial impressions from one viewing of “The Assassin” would indicate that he is an auteur with a specific vision and complete mastery of his mise-en-scene. It’s painterly, a wash of lush colors and beautiful, deliberate framing. It appears as though he placed every object within the frame by hand, giving each a slight nudge this way and that until everything within it is placed precisely where he wants it. All of this is to say that “The Assassin” is a beautiful film to look at. Each frame could be its own painting.

Nevertheless I struggled with it. Yet my struggle is a cultural one, not a cinematic one. I was very aware of the fact that the film was working on a level that I couldn’t grasp simply because it was doing things I didn’t have the proper lens to translate. With that in mind, I can’t rightfully place blame on the film for my lack of understanding. The meaning and purpose behind characters and motivations are often hidden behind symbolism and parables told. Many of which will, no doubt, lead to disconnects with western viewers as it has with me. I give Hou Hsiao Hsien the benefit of the doubt, because watching “The Assassin” I was immediately aware that it is a beautifully crafted film and my lack of understanding is entirely my own fault. I don’t know the politics, or the cultural norms and expectations, or the history that this film deals in. Yet I’m not inclined to place western expectations for fast paced action on what is a thoughtful piece of Asian cinema.

However, not lost on me is the fact that this is not a wuxia film in the standard sense. By design the fight sequences, that we are trained to expect to be thrilling enough to warrant the price of admission, are downplayed. That isn’t to say there isn’t a languid elegance to the fight sequences, but they exist to serve a purpose greater than cheap thrills. The emphasis is on avoiding fighting. Yet when there is fighting it’s isn’t lengthy, gratuitous or played up in any manner. It doesn’t praise the violence, which is to say that for the assassin, it is a task that must be completed, not necessarily one that is enjoyable or desirable. The quick nature of the fights also lends to the fact that real life sword fights aren’t likely to be long drawn out, beautifully choreographed things of entertainment. They are quick and deadly. That isn’t to say that what is choreographed isn’t beautiful in its own right. Yet it should be noted that martial arts movie fans will likely be disappointed by “The Assassin.” It’s about an assassin, but not about assassinations. It’s far more concerned with living within a different time, space and culture than about martial arts.

Yinniang (Shu Qi) is an assassin who was raised and nurtured to kill. In Asian cultures, particularly for the time, a person’s future is decided for them from a young age. She was trained to be an assassin whether or not that was the profession she wanted. She had also been betrothed to her cousin (not out of the ordinary for the time) and she grew quite close to him until he was forced away from her so that a marriage between he and another could create peace. The cousin is Tian Ji'an (Chang Chen) has since been appointed as a provincial leader. Meanwhile Yinniang, who has clearly become a master assassin, shows mercy to one target when she finds him holding a young child. Yet failing to complete her mission forces her master to test her resolve with a more difficult mission. This time she’s tasked with killing her cousin Tian Ji’an, a move that would show her resolve and plunge the province into chaos. That’s the setup, the rest of the film is her inner struggle, caught between her duty, and as her master calls it, “her human sentiment.”

She was betrayed by her own family, lied to, given someone to love only to have them taken away. This base emotion is the easiest aspect of the film to grasp. Yet Hou Hsiao Hsien seems to regard the events and even the characters from a distance. Rarely is emotional expression allowed. In the only scene in which Yinniang is allowed to cry, she does so hiding her face. Yinniang isn’t given much in terms of dialogue, and most of the exposition regarding her is told by characters around her. Hou refuses to follow the tried and true adage of “show don’t tell.” What he does show is remarkably beautiful, but he isn’t afraid to let his exposition be told. I’m undecided if I think that works in its favor or not. Nevertheless that could be another cause for disconnect with viewers.

In an age of filmmaking overrun with loud, fast cutting action films, “The Assassin” is a defiant and startling reminder of the beauty of stillness and silence. Rarely does music thump over the sound of nature in the background, and rarely does Hou Hsiao-Hsien move his camera (other than a few simple pans). It sits and observes. One of the more memorable shots is a point of view shot as we (and Yinniang) peer into the bed chamber of Tian Ji’an and his wife. We observe through several layers of curtains and slowly, silently move towards them allowing the wind to push the curtains out of the way. We are both curious to hear their conversation, and await to see whether or not the scene will end in death.

Like old values, likely held dear by the types of people “The Assassin” is concerned with, Hou Hsiao-Hsien is patient. His film is quiet. There isn’t an overabundance of dialogue or action. While more than a few of the plot points may be lost on some viewers, I suspect a second viewing would go a long way towards revealing their deeper meaning. The staggering beauty of the film will warrant that second viewing anyway. And considering Hou’s careful, meticulous manner of shooting, it would be a mistake to assume that every gesture, every line of dialogue, every camera move, every edit, and every other little piece of this film wasn’t carefully planned and purposefully executed. It then falls on the viewer to discover the meaning.